William Eslick lived in Spain for over twenty years. As a dog lover and dog owner, he found Spain a country of contrasting fortunes for the humble canine. He moved to Spain permanently in 1984, bought a boat in Gibraltar in the late 80's, but kept his Andalusian home to return to occasionally.

During that time he owned two dogs, but his life was never dog free!

Here is his view from Spain.

Over a period of twenty years living in Spain I owned two dogs. One a black German Pointer bitch named Zara and latterly a Jack Russell bitch named Gilly. Zara had Pointer parents but she was not exactly pedigree. Her owners, who were neighbours of mine in the village, also owned a finka (smallholding) so Zara was born in the Campo (country) and had the run of the place.

It was easy to exercise her. We lived in a mountain village some half hour drive from the coast. Immediately outside the village, tracks radiated in all directions. Zara would run ahead of the car, doing about ten mph. She looked back occasionally to make sure we were following and run for miles like that. There was no other traffic, although there would be an occasional diversion when she scented rabbit, that was all. When we stopped to picnic, she would be off exploring. She hated full immersion but would splash through streams, she would not even go out for morning necessities if it was raining. Perhaps being short haired had something to do with it. 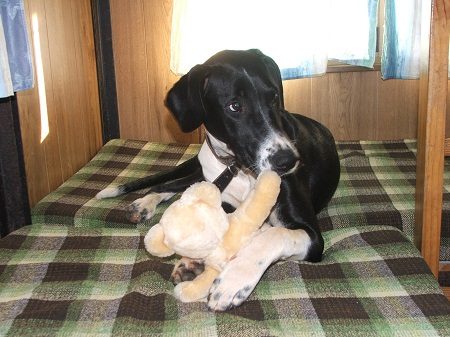 I once walked her out on a rainy day, up the main street in the village. I made a ‘horse blanket’ for her by attaching a sheet of clear plastic under her throat and body. Only her head and tail stuck out, the Spaniards thought it was hilarious. All Spanish dogs in the campo then were working animals. Little terriers would ride proudly on the backs of mules. It was only the influx of foreigners that brought pets onto the scene.

After Zara had died in Gibraltar we obtained Gilly (a puppy). I took her off a Spanish lad who was swinging her by her tail....on the way to the rubbish tip to dump her. She was completely traumatised. She would never allow children near her and never grew out of that phobia. Gilly just did not want exercise. If we took her to the beach all she did was sniff around piles of smelly seaweed and old washed up shoes which suited me!

Both Zara and Gilly were permitted into restaurants and bars. Remember that this was not the upmarket Marbella or coastal bonanza area! The patrons objected to them siting on the upholstery, that`s all, it was generally a pet friendly situation in the restaurants. Dogs were presented with off- cut ends of ham, cut from the ever present smoked cured leg on the counter. They got the whole leg if it was the end of carving!

The differences in owning a dog in Spain, from the U.K. are in the documentation required and the responsibility attached to dog ownership. Of course one can ignore all the documentation and just let life take its course. Unregistered, undocumented, un-protected dogs are at the mercy of the authorities. If they round them up to be put down the attitude seems to be “well that’s too bad. I’ll get another one.”

I knew a villager in Andalusia called Raphael who had a dog called ‘Girl’. Raphael could barely take care of himself, let alone this dog. Of course she was forever having litters as she pretty much lived rough. Then came one fateful day when the authorities decided enough was enough, this was a periodic exercise. Where the wardens came to round up the strays. Girl was one of the first apprehended. I saw her sitting in the van, ready to be carted off.

At lunchtime in the bar I said to Raphael that if he wanted to reclaim her, within the forty-eight hours deadline, I would pay the fine. He declined the offer.

Sadly, I think dog’s shall always be viewed as a commodity by those in Spain's rural areas.

Have you experienced life as an animal lover in another country? Let us know - we'd love to hear from you!