Dogs play a large part in the heritage of the Royal family. Certain breeds have taken their names from particular Royals while other breeds wouldn’t have existed at all had it not been by Royal request. To this day, all of the Royal families from the Plantagenets to the House of Orange have had within them dog fanciers of royal proportions.

Here, Patrick Ellis takes a retrospective look at the many muses of our monarchs.

King Canute, who was the second Dane to rule England, was quite passionate about animal rights, which was unusual for him, given his other passion, which was for beheading any Londoner who still claimed Edmund II as the King. And in being so passionate about the rights of Rabbits and other small quarry, he gave cause to the concept of ‘toy dogs’.

During his reign, which began upon his conquering of England, with the exception of London, he passed a law stating that ‘no dog that could fit through a gauge of eleven inches in diameter can be used for hunting.’ This law was passed because the King saw no sport or fairness in large dogs such as Spaniels, hunting small quarry. In response, hunters began to breed only the smallest Spaniels, until the breed known then as the Toy Spaniel was founded. 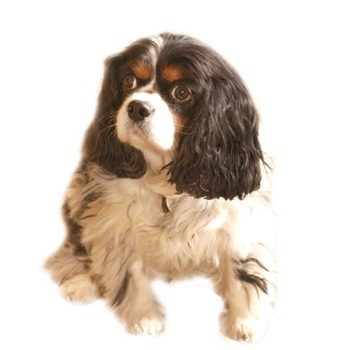 King Edward VI was the long awaited son of King Henry VIII. During his private education the King was surrounded by ‘privileged’ children who were to share in schooling. One of them, Barnaby Fitzpatrick, the cousin of the Earl of Ormonde, was appointed as Edward’s whipping boy, meaning that any punishments due to the naughty young King (who ascended to the throne at age nine) were delivered instead to the hapless Barnaby Fitzpatrick. All because you simply couldn’t whip the King.

In spite of this rather unfortunate role, Barnaby and the King became good friends, and in later life Barnaby was given the title Baron of Upper Ossory. Another of the Kings friends, Thomas Seymour became jealous at apparently being ousted from the King’s favours and one night paid a visit to the King armed with a pistol. Unable to find the King, the unstable Admiral shot one of the King’s beloved dogs instead. Fearing his punishment, he fled.

King James, who was ruling monarch of England, Scotland and Ireland during his reign, was a huge dog lover. He had many hounds, with whom he would go out hunting. He had one hound that he held in particular favour, called Jewel.

The Sovereign King spent much of his spare time with the Hound, until she was found dead, killed by a single bullet. The King was outraged until it was brought to his attention that the perpetrator of this crime was none other than his wife, Queen Anne who had mistakenly shot the dog whilst deer hunting. In an attempt to show his wife that he would love her nevertheless (and that her head would remain on her shoulders), he sent her a diamond, worth £2000 as a legacy to the dead hound, and he also told her she could have the London borough of Greenwich.

King Charles II was made King after his father Charles I was executed following the English Civil War. The King was famous for many things including his magnificent ability to run a parliament; in fact the parliament under his rule was called the Cavalier Parliament. He was also famous for his numerous illegitimate children and his love of a particular breed of small dog.

The dog, a ‘Toy Spaniel’ which was usually referred to simply as a ‘comforte dog’ and was often prescribed to the infirm by doctors as a means of treatment, was renamed the Cavalier King Charles Spaniel in honour of its most powerful admirer.

This Dutch aristocrat, who went on to become King William III, was a famous admirer of Pugs. He took the dogs with him from England to Holland where he lived in the House of Orange. When the Dutch thwarted a Spanish invasion shortly before the Prince became King, he attributed the good fortune to the little dog, who went on to become the official symbol of the House of Orange.

Upon her marriage to King George III, Charlotte brought some large, white, Spitz type dogs with her to the Royal home. These dogs were pets to her, but her husband showed little interest in her hobby. It wasn’t until a future monarch decided to ‘improve’ on the dogs by selective breeding that this particular dog became an established breed.

Queen Victoria is responsible for one of the most popular toy breeds that we know today. After inheriting some of the Royal dogs that were doted on by the wife of her predecessor to the throne, Queen Charlotte, Victoria kept the dogs as pets around her home. Upon the death of her husband Prince Albert in 1861, she turned much of her attention to tending to these dogs. Unhappy with their size, the Queen bred the dogs with smaller breeds to begin the breed we know today as the Pomeranian.

King Edward was quite the trendsetter amongst the British aristocracy. Noted for his foppish and flamboyant dress, and his many sexual indiscretions, the King, eldest son of Queen Victoria was somewhat of a rebel. Up to and during his reign, Edward was closely watched by his parents and their aides, and his behaviour was often criticised as being too risqué for a future King. Amongst his passions were gambling, sport, travel, women and his Wire Fox Terrier called Caesar. 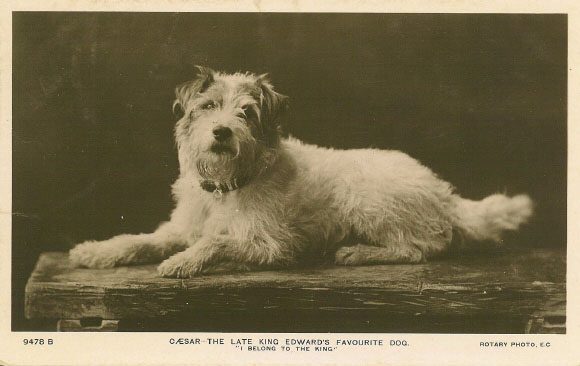 Caesar too, managed to write himself into the history books, when upon the death of King Edward in 1910; he was seen following the funeral precession, all by himself.

King George V was the founder of the house of Windsor and the Grandfather of the current Queen. He was a lover of Sealyham Terriers and Cairn Terriers and many Royally commissioned paintings show him with his dogs.

The reigning monarch is perhaps the most well known dog lover of the Royal family. She currently has ten dogs. Emma, Linnet, Holly and Willow are the names of her Corgis.  She also has three Dorgis (Daschund cross Corgi) by the names of Brandy, Cider and Berry. The Queen also looks after the corgis of the late Queen Mother and their names are: Rush, Minnie and Monty.

Elizabeth has owned over thirty Corgis, the first being Susan, who was given to her on her eighteenth birthday by her father, King George VI. The Corgis are perhaps the most well known of the Queen’s dogs, and were last seen in public sniffing around the feet of the World Cup winning rugby team in 2003.

On Christmas eve of 2003, one of the Queen’s ‘oldest and dearest’ Corgis, Pharos was attacked by an English Bull Terrier owned by Princess Anne. The dog suspected of the attack, named Dotty had courted controversy previously after landing the Princess in court following an attack on two youngsters in a park. It was later revealed that it wasn’t Dotty that had killed Pharos, but a dog called Florence, who was said to have been startled upon arriving at Sandringham as the Queen and her army of Corgis had gone to greet Princess Anne.

Will Ludo, the canine companion to the Duke and Duchess of Cambridge make this list in years to come? Who is your canine favourite of the Monarch world? Let us know!