Goa is the land of sun, sea and sand. Tourism arrived in this small western Indian state in a big way when the western world chose Goa as one of its holiday destinations. Goa’s abundant natural beauty, breathtaking beaches, friendly people and animals are all hugely appealing to tourists and they began to flock to Goa during the summer season.

However, as Dr Astrid Almeida, Veterinary Director of International Animal Rescue in Goa, explains - Goan beaches also happen to be home to many stray animals.

Most European tourists are fond of animals and love to feed them and adopt them during their short stay.  This means well fed stray animals for six months, while the rest of the year these animals are suddenly left without food.  As a result of this, local people would find large numbers of animals scavenging around their houses and disturbing their sleep with continual barking in the night.  In the past the authorities’ answer to this was for dogs to be shot or poisoned while others were beaten to death with sticks or stoned to death.

The Dangers Of Rabies

Rabies continues to be the most serious zoonotic disease in India resulting in more than 10,000 deaths per year.  The World Health Organisation (WHO) estimates that 87% of the cases of rabies in animals occur in dogs.  In India the street dogs are the main vector of transmission of rabies to human beings.  Moreover they play a major role in transmission of the disease to livestock.  Consequently, stray dogs are still feared by many local people, particularly if they show any signs of sickness or disease. 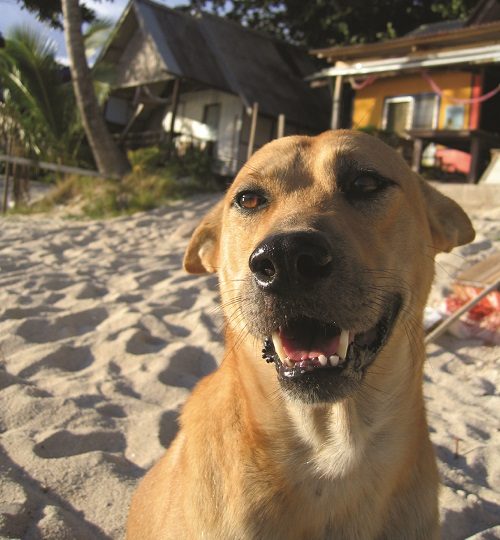 Uncontrolled breeding of stray populations has dire consequences for the animals in India.  Competition for food means that the most vulnerable are malnourished or starving, particularly pregnant and lactating bitches and young puppies.  There is also a high rate in the spread of infectious diseases and parasites.

Male dogs fight over bitches on heat and wounds and injuries quickly become infected and infested with maggots in the heat and the humidity. Females produce endless litters of puppies, many of which starve to death for lack of food. Stray animals are frequently injured or killed in the traffic on India’s busy roads and dogs with broken legs or paralysed spines are an all too common sight.

In the past, the authorities in Goa tried to control the dog population by employing a shooter to kill any dog without a collar.  Horrifically, his aim was so bad that in some cases it took at least three shots before the dog died.  Sometimes the animal would run off after being shot and die in terrible pain from its wounds or suffer a slow lingering death from starvation.  The tip of each dead dog’s tail was cut off by the shooter and presented to the government authorities in exchange for his payment.

This method was not only cruel, it was also found to be highly ineffective in controlling rabies and the dog population, but the government continued to adopt temporary solutions to a permanent problem.  There was a desperate need for an effective programme and a humane alternative to the barbaric method adopted by the civil authorities of Goa.

International Animal Rescue was set up in Goa to provide a lasting solution to the stray dog and cat problem by introducing a sterilisation and vaccination programme and treating the sick and injured among them.  The centre is situated in the serene, peaceful village of Assagao.  It was set up in 1998 by John and Jo Hicks, originally from Worthing in Sussex, and has grown to be one of the largest NGOs in Goa carrying out rescue work, sterilisations, vaccinations and providing a home for the homeless.

The charity is licensed under the Indian government’s Animal Birth Control (ABC) grant system which pays £5 (400INR) towards the cost of every dog that is sterilised.  The programme involves identification, neutering, tattooing, de-worming and vaccination of dogs and cats, followed by release in their home area and maximum possible re-vaccinations every year.

The aim is to achieve a stable, healthy and friendly dog population in the region. It is vital that every dog is returned to its own territory as soon as possible after treatment.  If a dog has to be kept at the clinic for more than eight weeks it is no longer safe to release it - it will be regarded as an outsider by the other dogs in the area and met with hostility and aggression.

We have undertaken surveys that show that dog and cat population density is related to different habitats, cultures and social strata of rural and urban populations.  Stray populations are larger in wealthier and tourist areas where more waste food is thrown away.  International Animal Rescue works in a major part of north Goa and in a small portion at the extreme south where there is no other organisation at work.  The clinic sterilises several hundred dogs and close to 100 cats every month.

In March 2005 we also set up a temporary centre at Canacona which is at the southern end of Goa.  Seeing the increasing dog population on the beaches, some volunteers helped us to set up a small centre using an old empty poultry farm.  Canacona is a two hour drive from the centre at Assagao so we carry out sterilisations once a week.

We have now also started to carry out sterilisation camps in the remote villages so that even the poorest of the poor can have their dogs sterilised.  Local authorities have helped us carry out such programmes.  Various posters have also been sent out to create awareness among locals of the importance of sterilising pet animals.

Apart from the ABC work, the IAR centre is involved in a lot of animal welfare work.  We have an outpatient clinic where our vets offer consultations at reasonable charges.  On an average we provide consultations to about 500 dog owners every month.  We also have a large animal department for the treatment, care and welfare of street cattle.

As the years go by we have seen an increase in the numbers of local people willing to give a home to stray puppies and kittens.  Pedigree dogs have always been popular as status symbols in India, regardless of the fact that Indian mongrels are intelligent, friendly dogs that are far better suited to the climate and conditions in India.  To encourage people to adopt these beautiful animals we sponsor their vaccination and sterilisation. We also provide free treatment during the first year.  In 2007 we were able to find homes for nearly 1,000 animals.

Every year on 19 December (Goa’s Liberation Day) International Animal Rescue organises a dog show so that the owners of dogs and puppies adopted from the centre or off the street can show their pets off.  At the event we also actively promote the benefits of adopting a street dog.

At International Animal Rescue we believe passionately in the power of education.  We organise talks at schools to teach people how to handle puppies and kittens and dogs on the street in order to avoid dog bites.  They are made to understand that animals have feelings too.

We also assist college students who carry out project work related to International Animal Rescue and its role which has been integrated into a degree at Goa University.  Many veterinary students from the UK and from Europe come to the IAR centre in Goa as part of their internship or simply to gain hands-on experience in treating animals.

Our work in Goa has expanded beyond belief.   Since its humble beginnings, when operations were done on a kitchen table, IAR has now graduated to a fully-fledged operational veterinary clinic and grown into one of the largest NGOs in Goa.  The crude wire cages have been replaced by bright, airy kennel blocks. Today we employ nearly thirty members of staff from Goa and other parts of India.  Our team includes six fully qualified vets, three nurses, ten kennel staff, four office staff and three drivers.  We now have about 150 animals in our care at any one time.

There is a kind of ripple effect leading to increasing cooperation in the local community.  We now get about 30 calls a day to help us locate dogs and cats that need neutering or to pick up injured or sick animals.  There is also an increase in awareness among owners to sterilise their pets and thus reduce the number of unwanted pups dumped in the market places.

There’s no doubt that the arrival of western tourists in Goa has triggered huge improvements in the welfare of the animals living here.  In some other Indian states stray dogs are still treated with contempt by local people and dealt with cruelly by the authorities.  International Animal Rescue supports the work of other groups in India wherever possible in the battle to end the suffering of those animals too.

We warmly welcome visitors to the centre and conduct daily tours to meet the dogs.  Details of how to find us can be found on our website: www.internationalanimalrescue.org  - the site also has information about IAR’s other projects to help animals, which include rescuing and rehabilitating dancing bears in India and captive primates in Indonesia.