We all know that dogs are valuable to us because of their instincts, but if you give it enough thought, it is easy to become a bit overwhelmed by just how the dog arrived at its current state of mental agility. How on Earth did we go from domesticating a wolf to creating an animal that has the physical ability, instinct and inclination to perform a very specific job?

How much did nature play a part in this process, or was it blind luck that landed man with a four legged companion who was able to hunt, fetch, track, protect or even guard?

Over the next few issues of K9 Magazine, Desmond Fellows will be looking at the different types of jobs that dogs do, or have been asked to do in the past, and how we got them to that stage of ability and inclination. Going right back to the advent of that certain type of dog, we'll examine why and how man identified the latent talent and what process he followed to arrive at the final result.

In this issue, we look at the history of the Sighthound.

The Sight Hound is believed to be the oldest type of dog on Earth, which makes it a perfect dog to start with. Popular Sight Hounds include, the Greyhound, Saluki, Whippet, Borzoi, Irish Wolfhound and Scottish Deerhound. Its main role was to use its sight to spot movement and then to hunt down and either kill or capture the quarry.

The Sighthound is one of three types of hound and is believed to be representative of the first type of domesticated dog. It is a relative of the Scent Hound, which uses nose power rather than vision to perform a specific task. The third type of hound is ostensibly a dog that displays equal prominence of both sight and scenting ability, this is a debatable topic of classification, but the Basenji is often considered to be a member of the third type.

All hounds were originally bred and developed for hunting, with the original specimens originating in Africa, or possibly Arabia. The Sighthound's strongest instinct is to react to movement on its periphery. If you look at a sight hound, you'll notice that it has a slender head and its eyes are placed fairly wide on, enabling it to see a wide panorama. This is linked to the fact that the Sighthound was originally bred in areas with wide, open land, such as desert, which required good long distance and peripheral vision. 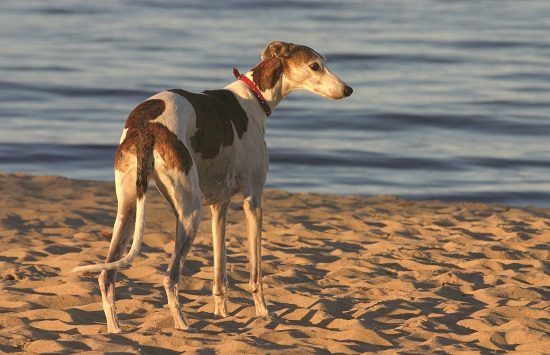 To man, the presence of the slender head would have signalled good hunting ability, which is why the dogs with the longer heads would have been favoured.

Almost all Sighthounds are fast, lean and athletic, with the Greyhound and Irish Wolfhound breeds providing two excellent examples. Sighthounds do display a range of sizes and builds, but almost every type of Sighthound demonstrates a physique for speed, speed and endurance or endurance alone, which is almost always lean and strong.

The slender head and long nose is a typical characteristic of the Sighthound. the degree to which the dog displays the typical characteristics of its type depends on the breed, the genetics and the activity level of the dog. For example, the average Greyhound will typically be extremely lean, exhibiting an extremely low amount of body fat, whilst a Rhodesian Ridgeback will almost always be of sturdier and more substantial proportions.

Coat density and colour would almost definitely be a result of environment, determined by temperature and other factors such as presence of sand or water. The coat type will most likely have been retained for many generations until man's interests dictated that it changed.

Development Of The Sighthound

The Afghan Hound is thought to represent the early domesticated dog. This is not to say that the Afghan Hound is a direct descendent of the wolf, simply that the first uniform type of dog to exist as far as historians can agree is that of a lean, agile, fast hunting dog adept at crossing desert land to catch prey.

Over time man has refined his specifications as his needs and environment have changed, but how did he first achieve the Sighthound? Selective breeding is the obvious path, but what is less obvious is just what elements were selective and what were governed by the uncontrollable?

It stands to reason that man will have identified in the wolf, a combination of speed, strength and hunting instinct and he will have also identified the potential value of this combination when applied to his own situation. Which is why man will have bred from the wolf in order to generate an animal that could hunt, but would also be more easy to control in terms of behaviour - man wouldn't want the animal he created to 'hunt' his own children would he?

Over time, man would have bred from the strongest and most able specimens, whilst out-crossing with examples of the canine form which displayed other desirable attributes such as swimming ability or higher tolerance of cold, for example.

As man's ability to selectively breed the canine type increased, so did his need to generate more exacting standards in his dogs. Where once a dog that could hunt was considered valuable, man would have arrived at a stage where only a dog that could hunt alone, in the cold would be valuable. This is an example to illustrate the different needs of different, disparate peoples located around the world. It demonstrates how the development of a type of dog such as the Sighthound has been influenced and informed by man's own evolution and development, as well as his needs and desires.

Compared to the influence of nature, man's involvement in the development of the Sighthound type has been disproportionately high when compared with other creatures in the animal kingdom.

While all dogs have latent instincts relating to survival and food, the level to which these instincts are exhibited differs from dog to dog. In order to create a type of dog which uniformly displays a certain instinct, such as hunting, man will have had to very carefully select only specimens with good health and high levels of the desirable instinct from which to breed.

Training and rewarding the behaviour will have also had the effect, over time, of bringing certain behaviours or operants to the fore in the behaviour patterns of dogs. For example, if a dog that is trained through reward to chase hare or deer, it is likely that the offspring of that dog will be more susceptible to the same training. Combinations of intelligence, instinct, health and physical ability are and were still sought after by man, so combinations of all four made certain dogs very desirable as breeding stock.

The Changing Role Of The Sighthound

The role of the Sighthound is as a hunting dog. Types of Sighthound roles include those that work in packs and those that work alone. Man has nurtured and encouraged the desire to hunt alongside the combination of physical and mental ability. It is still the hunting instincts, such as chasing, that are of value to man today. As pets, Sighthounds are desirable and adaptable, with their intelligence and co-operative temperament being valued above their working strengths.

The traditional hunting dogs were amongst the first the become redundant in terms of working, although Scent Hounds are the only working dogs yet to be outperformed by mechanisation. As the need for hunting dogs has declined over the centuries, the popularity of the Sighthound amongst certain demographics has dipped and peaked of its own accord.

It is ironic that the working abilities of some of the most well known Sighthounds have only become noticed by mainstream dog owners when put into a competitive context, such as Greyhound Racing.

The Sighthound itself hasn't changed dramatically since it became established through the existence of breeds such as the Greyhound and Whippet, however, man's application and exploitation of the natural instincts of the Sighthound has. Once man stopped using the Sighthound for hunting, ferocity was less valuable and as a result dwindled in favour of intelligence and other more desirable modern traits.

Do you own a Sighthound? Can you see their history in their daily habits? We'd love to hear from you!