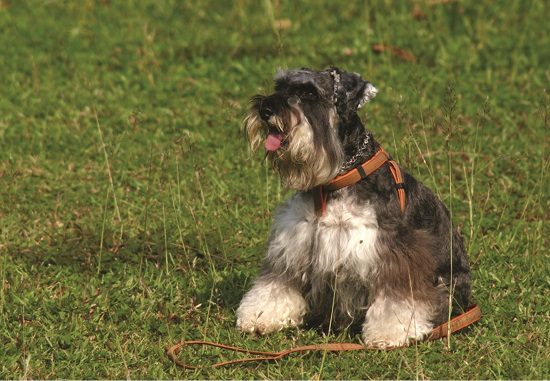 Karen Norling is no stranger to the diseases that can befall our canines. A dog owner for many years, she has experienced her fair share first hand with her beloved dog, Oreo, as she recalls here.

My first Miniature Schnauzer, “Oreo,” suffered from a number of them: when he was 13 months old, he acquired canine parvovirus. Despite his having been appropriately vaccinated against it, he had to stay in the hospital for 10 days and nearly died.

When he was two years old, he was diagnosed as having epilepsy after several grand mal seizures.  When he was three, his bladder began forming stones. He underwent surgery, on more than one occasion, to remove these stones.  Eventually, he began suffering from potentially life-threatening bouts of pancreatitis that landed him repeatedly in the hospital.  Finally, when he was nearly 12 years old, he acquired hemangiosarcoma (a malignant cancer of the cells that form blood vessels). 60 days after I received his diagnosis, he slipped away.

As you can see, Oreo suffered enough disease for two or three Schnauzers.  Fortunately, however, my husband, Jim, and I were always able to provide him the level of care that would bring him back to good health (except for the hemangiosarcoma).  Such was not the case with “Jazz,” another of our Schnauzers.  Just months ago, Jazz was diagnosed as having a disease neither Jim nor I had ever heard of: “immune-mediated hemolytic anemia” (IMHA).

Never could I have imagined that his subtle lack of appetite one Saturday evening would foreshadow one of the most painful, most bewildering experiences of my life . . .

The next morning, Jazz stayed in bed while Jim and I went down to the kitchen for breakfast.  Normally, Jazz would wake up with us, stretch for a moment or two, then follow.  Why wasn’t he standing at my feet?

Immediately, he trotted down to the laundry room where I was holding the door open.  Per usual, he climbed down the three shallow steps that led to the grass and started sniffing.  I went back to the kitchen for a few moments, then returned to the open door. “Come on in,” I coaxed him, but he just stood there looking at me.  “Come on, baby,” I tried again.  Again, he just looked at me.   Apparently, he didn’t want to climb up the steps.

Without much hesitation, I scooped him into my arms and carried him inside, noticing a reddish-orange splotch on my sweatshirt as I set him down in the family room.  Uh-oh, I thought.  He must have a cut on one of his paws.  Either that, or his urine has blood in it—which would mean he probably has a bladder infection.

Concluding that the blood was coming from his urine, Jim and I hopped into our car and took him to the local emergency clinic.  By the time we obtained a sample of his urine for the doctor to see - less than two hours after I’d noticed the splotch on my shirt - it looked like pure blood.

Would a bladder infection look like this? I swallowed hard.  What is going on?  (I later learned that what appeared to be blood in Jazz’s urine was actually hemoglobin released from broken blood cells.)

Frightened as I was, I continued to believe that the doctor would take care of anything that threatened Jazz’s well being. After sitting more than two hours in the waiting room, while Jazz was being evaluated, Jim and I were taken back to see “Dr. Ford.”

“Packed cell volume [PCV] is the percentage of blood made up of red blood cells versus the percentage of plasma,” she responded.  Normal can be anywhere from 37% to 55% in canines.  Jazz’ is 18%.  See how his tongue looks discolored?” she opened his mouth.  “How the whites of his eyes are jaundiced?”

I thought his tongue looked a little off, but I honestly had not noticed the jaundice (yellow) in his eyes.

“There are two types of IMHA,” she continued.  “Primary [idiopathic] and secondary.  We can’t identify a cause for primary IMHA.  We can, however, identify a cause for secondary IMHA--such as: cancer, infectious diseases, reactions to certain drugs, or tick-borne diseases, like Lyme disease.  Unfortunately, I believe Jazz has primary IMHA which is generally more difficult to treat.”

A Final Note From Karen...

I am making a point of contributing to IMHA research any way I can in the hope that an effective treatment - at the very least - will be discovered.  You can contribute, too, with the realization that, at present, primary IMHA could touch your life as harrowingly as it touched mine.  Here’s how you can help:

The Cummings School of Veterinary Medicine at Tufts University is currently involved in clinical research to try to improve the treatment of dogs with IMHA.  You can send your donation online or by phone: (508) 839-7905 or by visiting them online at http://www.tufts.edu - whatever method you choose, please specify that your donation be used for IMHA research.

We're always on the hunt for the best dog products around, and we suddenly thought - what's the point in us knowing if we...

We all have questions about our dogs and why they do certain things and can't shake certain habits. This month we've taken some of...

Protecting Your Puppy For The Future

There are plenty of things a dog owner has to think about when they get a new puppy. Puppy food, bedding, toys, is the...