Have you heard the story of Sky, a dog whose life is desperately trying to be saved? If not, then let us tell you about her before we ask you to help save her life.

Sky is a four year old cross-breed dog who was put in kennels by her young owner. When he didn't return, the kennels made contact and discovered he had moved to Australia.

What does this have to do with anything you might ask? Well, it's the beginning of Sky's story and it is the reason police seized her as DDA Watch tell us. 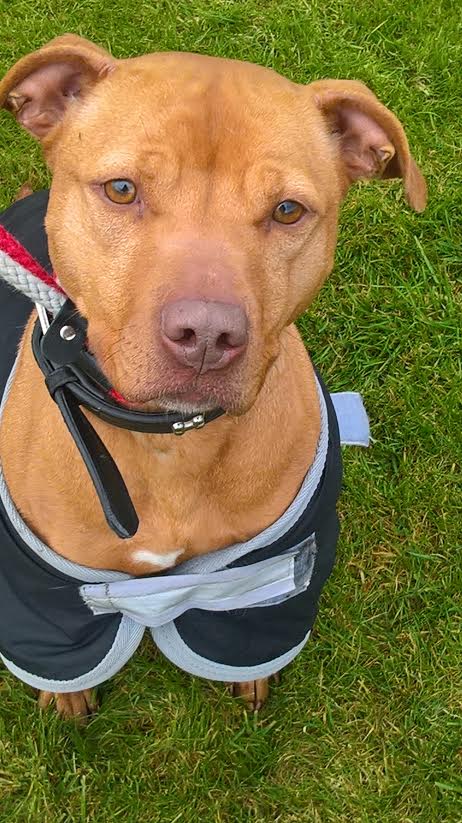 DDA Watch, who are trying to save Sky's life told us she had previously been registered (exempted via court order) on the Index of Exempted Dogs some time ago.

This index effectively is a list of dogs who are deemed to be a banned breed, or 'type', but the court think the dog is not a danger to the public and allow the dog's owner to register their dog and adhere to restrictions and guidelines in order to keep and save the dog's life.

The organisation say, "In 2015 her owner had placed Sky in kennels and did not return for her. This was when it was discovered he had moved to Australia and the kennels took care of Sky before she was seized by police under Breed Specific Legislation.

"The police then applied to the court for a destruction order which the magistrates’ court granted. Sky initially had no legal representation. Since then DDA Watch have agreed to fund her case and Wheldon Law were instructed to act on her behalf and an appeal was then lodged." 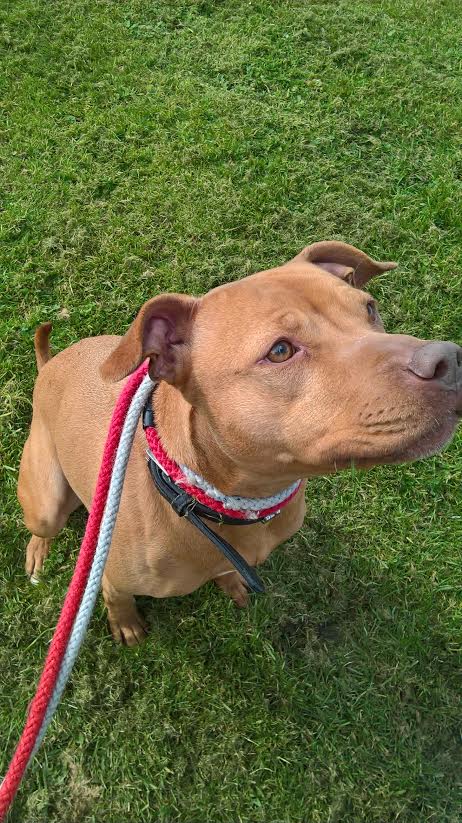 The original owner was traced and in Australia, he was contacted and agreed to do all he could to help save Sky.

Sky's case was heard in Bristol Crown Court on the 11th August 2016 and Sky was represented by barrister Pamela Rose who has a vast experience spanning over 25 years with dog law and BSL cases. DDA Watch say, "We were overjoyed to report that the appeal was successful and the destruction order was overturned; Sky was ordered by the Crown Court to be exempted within two calendar months - the court agreed that a new keeper could be appointed for Sky."

Her new family were overjoyed they could become her keeper

During Sky's time at the kennels she had been found to be a loving, gentle and friendly dog who bonded with a volunteer who wished to help her and become her carer. Eleanor McCann, daughter of Barbara (who was granted keepership of Sky) tells us Sky will be their family dog.

Eleanor recalls meeting Sky, "I met her while volunteering at my local kennels walking or sitting with the stray dogs there. My mum, Barbara often came also. One day we saw Sky in one of the kennels and thought she was absolutely beautiful, she was wagging her tail at us and desperate to say hello to us, the kennel girl told us how lovely she was, we took her treats and I was allowed to walk her, after a period of time we formed a very strong bond with Sky, she would know when we arriving to see her and she would know our car as we pulled into the kennels, we never ever missed a visit to see Sky in the year plus that we walked her, she was as eager to see us as we were to see her, we were her best friends.

"I fell in love with Sky. She was so happy, gentle and loving, Sky loved cuddles and would snuggle into you as close as she could. I remember walking her one day and thinking she was just perfect, a beautiful girl inside and out. Sky has the most kind, sweet face and golden eyes that brighten and change colour in the sunshine, Mum and I would often comment on this. If you knew Sky you could not help but fall in love with her, she has a wonderful, special nature." 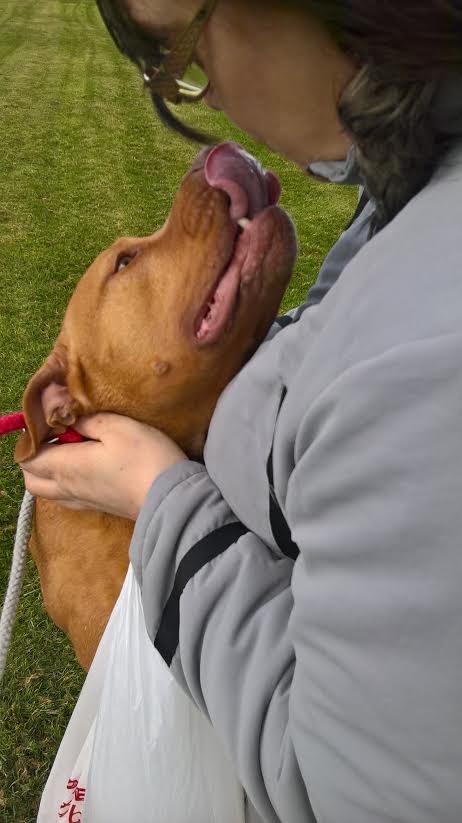 Barbara continued, "Sky also had a special character that could make us giggle, she could always find a ball or rope in the grass to take back with her, I knew I loved her straight away and I knew she loved me, when we had to say goodbye for the day she would stop and stare and watch us until we were right out of sight, when she saw us arrive to see her she would be so excited and we would be greeted by kisses."

But Police & DEFRA refused to register, leaving Sky's life hanging in the balance

In Sky's case, they tell us "Avon and Somerset Police disputed the Crown court order and DEFRA refused to register Sky to the new keeper which meant that Sky was unable to complete the exemption process as the Crown court had ordered.

She remains locked away on 'canine death row' even though the court has ordered she can be exempted and released.

"As Sky was unable to complete exemption, a copy of the Crown Court transcript was needed urgently by the legal team representing Sky as the first stage in considering whether a legal challenge could be made - this was obtained at a cost of £628.32 which was raised from donations; there is no legal aid possible under this section of the law and Sky's case is funded by DDA Watch; we are very grateful to Wheldon Law for all their continued help and support.

What is happening now?

After spending so long in kennels on death row, DDA Watch tell us "an application for a Judicial Review (JR) was made and as part of the application, the court were asked for a stay of execution until the case was heard. The High Court then refused the application." 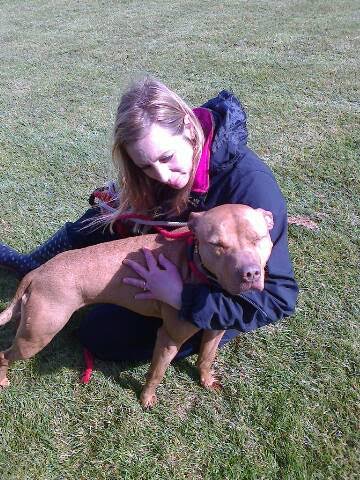 They continue, "DDA Watch was contacted by a QC - a public law specialist barrister with substantial experience of judicial review proceedings who offered to help and we were pleased to announce that she had joined the legal team working on Sky's case on a pro bono basis. The legal team then lodged an appeal in February in the Civil Court against the court's refusal; the Civil Court of Appeal then refused our appeal against the decision of the Administrative Court. Sky's dedicated legal team then worked away again tirelessly to put together and serve an application to state a case on Bristol Crown Court, the application was also served on Avon and Somerset police.

"The legal team then lodged an appeal in February in the Civil Court against the court's refusal; the Civil Court of Appeal then refused our appeal against the decision of the Administrative Court. Sky's dedicated legal team then worked away again tirelessly to put together and serve an application to state a case on Bristol Crown Court, the application was also served on Avon and Somerset police."

As Sky had been unable to complete exemption as ordered by the Crown Court within two calendar months since August last year, the court order, a Contingent Destruction Order, (CDO) which had already been extended, and expired on the 24th of March. This meant Sky could be destroyed as exemption had not been completed. Work was underway with the legal team to safeguard Sky, the solicitors for Defra agreed to a further extension but Avon and Somerset Police tried to prevent the current stay of execution from being extended which would have put Sky at immediate risk of destruction, they were asked to reconsider their decision in the light of new proceedings being served.

DDA Watch tell us, "Work was underway with the legal team to safeguard Sky. The solicitors for Defra agreed to a further extension but Avon and Somerset Police tried to prevent the current stay of execution from being extended, which would have put Sky at immediate risk of destruction, they were asked to reconsider their decision in the light of new proceedings being served.

"We were all relieved to learn that Sky was granted a last-minute stay of execution recently to the 5th April with a hearing at Bristol Crown Court regarding the CDO extension on the 4th April. It was another tense and emotional day in what has become a marathon of a case which is heartbreaking to those trying to save the life of an innocent dog locked up and condemned under breed specific legislation.

Sky's supporters and DDA Watch have been fundraising for Sky's legal defence since the original appeal last year.

There is an on-going campaign for Sky and all dogs persecuted under this flawed law, to raise awareness and push forward for change to save future dogs whose lives may be at risk purely because of how they look.

How you can help Sky

You can help by adding your voice to the new petition to save Sky's life and give her new family hope that they will eventually be able to bring their kind and funny girl home.

Eleanor says, "I get days where I feel so, so sad thinking of Sky in police kennels, I always hope that she won't think we have abandoned her and I hope she can somehow sense how much we love her, it has been hard as it has been nearly a year since she was seized by the police but we have coped with the hope that we will be re united with Sky again."

Barbara continues, "I have coped by trying to stay positive and the thought of being reunited with Sky again, it is very hard though as it is so unfair that she is separated from the family that love her and she is such a good dog that deserves love. DDA Watch and lovely supportive friends have encouraged us to stay strong to help us try and cope with this uncertainty but it is so unfair and cruel for Sky to be locked away for looking a certain way in the eyes of the law, she has never put a paw out of place."

Eleanor concludes, "DDA Watch has been an amazing support from the very beginning, they have answered our questions and supported us in every way possible, I am also very lucky to have some wonderful friends that have been extremely supportive but not one single day goes by without myself and Mum thinking about Sky, it is so unfair as she has done nothing wrong and she deserves to be with the family that love her."

No dog deserves to suffer as Sky has. Have your say and save her life.