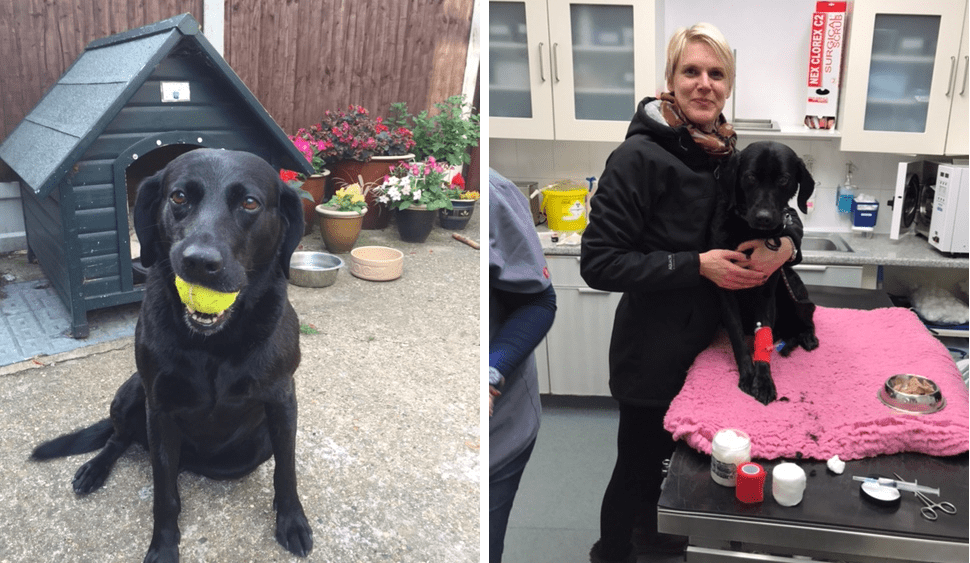 Our dogs mean the world to us and with social media at hand, you sometimes hear stories of how a community unites to support one another making the most of Facebook or Twitter when we, or our pets, are in need.

This is one such story. In fact, it's like something straight out of a Hollywood studio because it has it all – and, most importantly, it has a happy ending, as K9 Magazine discovered.

Mr Tyson Burns-Green lives on Mersea Island with his family and their black Labrador, Ella. An older girl at 9 years old, Ella is working bred, fit and active. Ella is also a bit of an escape artist.

A typical Thursday began in the usual way for the Burns-Green family, but the normal working day ended in a text revealing Ella wasn't where she should be and started a four-day search to find and bring the family's beloved Labrador home.

Mr Tyson Burns-Green recalled the day, “Ella has a kennel outside in the garden which she sometimes spends her days in when the weather is warm.

“We also have retired neighbours who come and take Ella sometimes to spend the day with them, so when she wasn't inside when I left for work that morning it wasn't a surprise.

“However when my wife, Kate, sent me a text later that day to tell me she wasn't at home or in the garden, she'd already checked with our neighbours and she wasn't there. It was then we realised she had escaped and been gone all day. There is a hole in the fence and we discovered she had used this to escape into the neighbours garden, who had left their gates open and from there, she'd left.”

It's not the first time she's escaped. When delivery drivers have previously left gates open she's taken herself off for a walk a couple of times Tyson tells us, “but normally only to the end of the street before returning home. Mersea Island is a small island and she knows it well. It's not very big and she knows her way around.”

This time it was different though because she'd been gone all day.

Tyson says, "Kate spoke with a friend, Felicity, who is the big cheese at the Mersea Island community Facebook page, which has around 5,000 members. She put a message on letting people know Ella was missing while we called around local vets.

“We discovered someone had called a vets reportedly seeing a black Labrador being hit by a car who was driving 'like a bat out of hell' on the high street, which would have been unusual for the place we live.

“We had what felt like half of the island out looking for her. Another report came in from Simon Clark, who works near a boat yard. He went and got a boat before heading out to look for her, but he saw no sign of Ella. We were also told another story of a dog crying in pain in a field.”

Tyson and his family continued to arrange search parties with searches continuing over the weekend and by Saturday afternoon the only place which hadn't been searched was Ray Island, which is off the coast of Mersea.

Tyson says, “Ray Island is hard to get into, it has a lot of brambles and is about three-quarters of a mile long and a quarter of a mile wide.”

But knowing it was the only place not yet searched Tyson, Kate and their daughter, Lucy began searching spending hours calling Ella's name without any joy.

By 1pm on Sunday another search party had been arranged and was en route to Ray Island following a call made to Tyson by Jon Miller who was on the island with his wife and their working Labrador, Trigger.

More used to flushing pheasants than Labradors, Trigger it seemed inadvertently found and flushed Ella out of the marshes.

The family made their way back to the island with a search party. Everyone knew that the light by this point in the afternoon would soon be fading and the tide would be coming in. Time wasn't on their side, but now they knew where she was they could concentrate their efforts to bring their girl home.

Climbing through the bramble marshes, Tyson could see old and new Labrador footprints. The island is home only to ducks so he knew they must belong to Ella.

Hiding and disorientated, Ella wasn't coming when called, perhaps fearful she may be in trouble. The search party knew she was nearby but still couldn't get her to come to their calls.

Tyson recalls, “I thought the best way we could get an idea of where she was had to be from the air but the police and coastguard only wanted to come if a person was in trouble. Their jet fuel costs £2,000 an hour, so we had some drones flown above the island. Then I had a call from a guy on Mersea who could see us."

“Bearing in mind Ray Island isn't huge, he told us he could see Ella where we couldn't and she was about a quarter of a mile ahead of us.”

Directing Tyson and his friends and family towards her, he told them Ella was heading back into the water.

Tyson says, “Our plan was now to get to the pontoon with boats thinking she couldn't out run a boat, surely.”

Kate ran down with a few of the search party and we got two boats. The West Mersea RNLI, a big part of the community, were also on hand to help should any of the dozen or so party get into trouble.

Explaining just how much the RNLI is a part of the community, Tyson told us they were able to buy new boats last year after a local resident passed away and left them their estate.

Martin Wade, Lifeboat Operations Manager at West Mersea RNLI, said "We launched not only out of concern for Ella, but also because in our experience, when animals are in distress, humans often try to assist them and get into danger themselves. We were concerned that people might be looking for Ella on Ray Island and could be at risk of being trapped there by the incoming tide."

After leaving Ray Island, Ella headed towards nearby Packing Shed Island before she headed off again. This time the direction she took would have meant her next nearest land point would have been Belgium, according to Tyson.

Each boat was manned by a friend. One with Stacy Belbin and her boat, Lady Grace and the other with Robin Gozzett leading the way. Robin was also joined by family friend Jake Bowyer, who was there to grab hold of Ella and bring her on board the dinghy.

The trio managed to safely bring Ella aboard before arriving ashore to hundreds of well-wishers waiting to see her reunited with her family.

Once safely on dry land, Ella was rushed to Blackwater Veterinary Surgery for an emergency check up.

Tyson says, “Our vets opened especially for her that day and we were very lucky. Even after the car accident, she was absolutely fine physically but she was about 95% dehydrated and they told us she wouldn't have lasted another night."

Tyson continued, “We are thrilled she's home, although I think she doesn't quite understand all of the fuss. She's become a local celebrity with newspapers covering her adventure. Kate has even been on BBC Essex local radio with her after they ran a feature online."

The family have been overwhelmed by the love and support of their community.

“Our community really came together and without their support, well, let's just say we are grateful we had a happy ending. We are very lucky.”

Following Ella's rescue and the involvement and support of the West Mersea RNLI, a local resident, Caroline Bowring set up a JustGiving page which has raised just under £1,300. Tyson told us Ella looks forward to presenting West Mersea RNLI with their donation very soon.

If you would like to make a donation, the JustGiving page has now closed but you find out how to show your support here

What the Dog Knows: Understanding How Dogs Perceive the World

At K9 Magazine we're kind of obsessed about what dogs know that we don't yet know they know, if you know what I mean....

In This Issue... Behaviour: Could Your Dog Have ADHD? Talking Point: What You Need to Know About the Puppy Trade  Book Club: Understanding How...

Have you ever wondered what every day life might be like if you were deaf? If you have a passion, such as music, could...

Have you ever stopped to wonder why some dogs spend longer in rescue than others? Often it's simply bad luck, but everyone's luck has...