The world feels like it's in a precarious position right now. Here in the UK, we're divided and across the ocean in America, we see a nation who are also not a united state, but one fighting for rights they feel are under threat.

With the words of Dionne Warwick's version of 'What the World Needs Now Is Love' ringing in my ears I'd like to share the story of a dog in New York who is standing on street corners giving out hugs for free. She does it because, well, she's a dog and that's just how awesome her kind is. 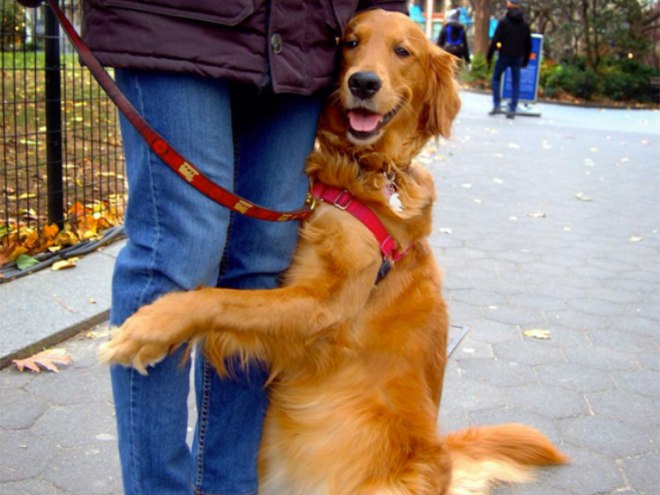 She's a five year old Golden Retriever and for the past few years she's given out hugs in New York. Sometimes to strangers, sometimes to those who seek her out having heard about the beautiful, kind spirit of this dog spreading love wherever she goes.

Loubie is owned by Cesar, he spoke to K9 Magazine about how he came to own Loubie and recognised her talent for making others feel good. He has owned Loubie from a youngster aged around 3-4 months old and says she's been an affectionate girl since she was a puppy.

He told us he used to kneel to hug her all the time and thinks she maybe picked up on that movement by finding her own way to hug him back by holding onto his legs. He recalled the memory, "She started with what I called 'holding hands' a week before Valentine's in 2014 and back in the day I joked that at least I had her to hold hands with since I was a single gay guy (and still am). About a year after she added her original and now famous 'hug'."

Cesar says she carried on hugging like that for a year and then she started spreading her love hugging other people. He says, "She may have hugged me at least 500 times, she does it a few times on every walk."

He estimates she has hugged around 100 other people but met many more who recognise her as the 'hugging dog' (she has been featured in UK and US media before and has over 16,900 Instagram followers).

Repost @danielle.muchnik My day got 200% better after meeting this dog 🐶

Of the people she's met he says, "She makes people happy because she is very affectionate towards humans. I didn't trained her to hug, there is no a command to ask her to do it, but knowing her as I do I know her routine and can spot when she is going to do it. For example,  if we are talking to a group of people and everyone is petting her she starts to lean on them one by one. Then if she sits next to any of the people in the group, I know she'll pick that person for a hug."

Having been known as the hugging dog in NYC for a few years, Cesar says his most memorable moments of life with Loubie is when he's been on holiday and comes back to her hugs. To him, they are priceless and as dog owners I'm sure we can completely understand this.

Out on the street, her hugs have led to some very special moments as Cesar says he has been touched by some of the beautiful things strangers have told him after an encounter with Loubie.

Cesar speculates, "Maybe she is going around sniffing out who needs a hug!"

Repost @samanthabrowntravels There's a hug and then there's...a dog hug. Thank you to Loubie and her dad Cesar for a really nice moment. Nice talking to you! AND of course Loubie has her own instagram acct! louboutinanyc.

Above all, Cesar believes we can learn something special from all dogs. Their lives are shorter than we would like and he believes we can learn a lot if we choose to live our lives how they approach theirs - with an open heart and taking a look at what's in front of us. Put down the technology (when you're finished reading this article and bookmarked the site, of course) and enjoy what's in front of you.

As he makes this point he tells us, "Loubie tends to stand in front of me and put her paws in front of me if I am sitting on my sofa for too long on my laptop, iPad or cell phone. She is a constant reminder that is more fun to be here on planet earth that in some technological cloud." 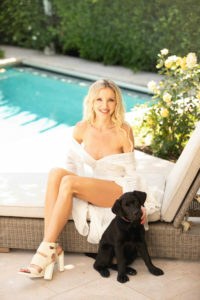 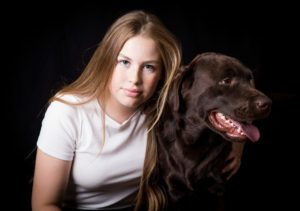