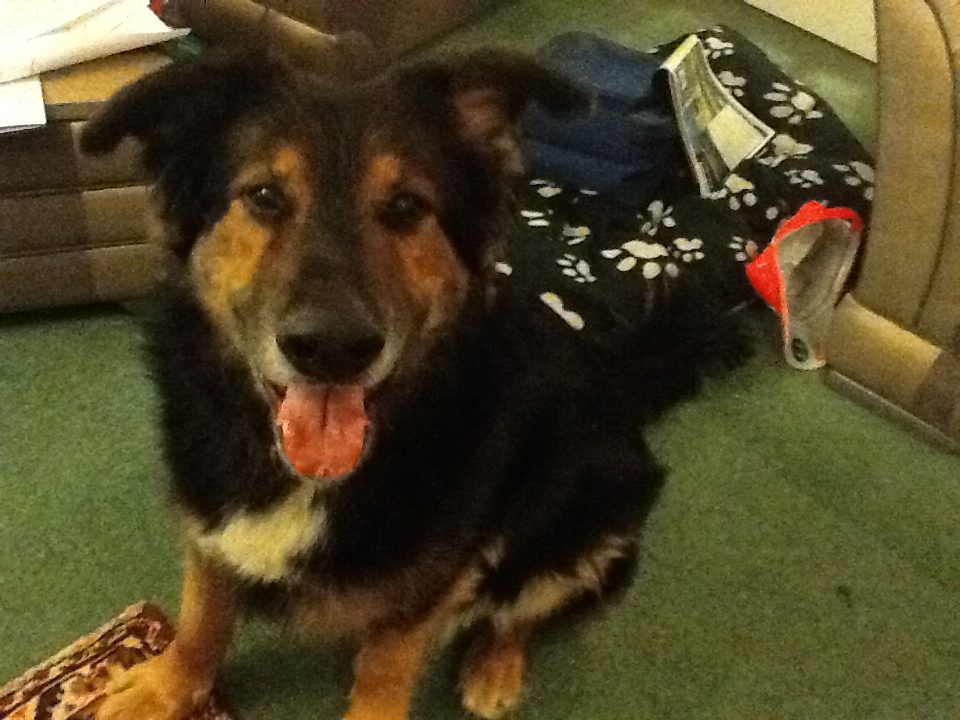 How do you people cope? Why are your winters so cold? Can someone tell me why icicles are hanging off my coat? I’m not in the habit of complaining but given the dire state of your weather I feel obliged to speak out.

When I lived in the Athens animal shelter the staff always talked about England and what a wonderful country it was. The things they said really fired my imagination and when I was told I’d be moving there I was beside myself with excitement. I expected lush, rolling green hills, glorious sunshine and orchards spilling with tasty, sweet smelling fruit. It was kind of like that when Mrs. Woman (who thinks she’s in charge) and The Boss (who thinks he knows everything), collected me from the kennels the day after I arrived. Okay, so there aren’t any orchards or rolling hills around Peckham (where we live), but it does have a park and the last time I went there it was green!

Back in those days everything was great. I’d wake up in the mornings, rearing to go for a walk, with my tail wagging furiously. Sunlight splashed through the curtains and the air would be heavy with excitement.

“Watch out world!” I’d think “the sun’s out and I’m unstoppable.”

Even Mrs. Woman couldn’t keep up.

That would be The Boss’s cue to take charge of the lead (in those days he really needed the exercise), and after ten minutes I’d totally run him ragged.

He’d collapse on a park bench and ruefully shake his head, puffing so hard his chest looked as if it was about to explode.

We soldiered on like this throughout June, July and August but even I could sense the tide of change in the air. By the middle of September temperatures were swinging between warm and freezing (by my standards), while Mrs. Woman wouldn’t leave the house unless she was wrapped in thermals, scarves and cardigans topped off with a fake fur coat. For some reason nobody batted an eyelid at the sight of a tall woman, swathed in more fabric than you’d find in a textile mill, waddling through the park in spiky, stiletto heeled boots. Speaking for myself I wasn’t sure whether to laugh or cry. Mrs. Woman’s dress sense is usually impeccable but there were times when I could have sworn I was being walked by an upmarket bag lady!

Nevertheless she was right to be prepared. The cold blast of a chill autumn wind feels like a steel blade cutting into flesh. Talk about life in the freezer! For a dog with Mediterranean genes, English winters are torture. To put it bluntly I’m not coping terribly well, though in fairness I’m doing my best and Mrs. Woman and The Boss realise this. Every morning they coax me from my bed with soothing words, pats on the head and bribes of cheese and garlic biscuits (my favourites). The moment I succumb the lead is hooked to my collar and then we’re down the stairs and out of the house before I’ve even had time to check the barometer. I walk slowly beside them, staring into their eyes with a tragic, imploring expression on my face.

“Hey guys this isn’t fair! Can’t we do this later when it’s warmer?” I think.

“Ah” Mrs. Woman coos “doesn’t Pinkalinka look sweet when he smiles like that.”

I still haven’t worked out how she can mistake my distress for enjoyment. Believe me there’s nothing great about walking through a park on a cold, dark winter morning (don’t get me started on the end of British Summer Time. It seriously plays havoc with my body clock!), when I’d rather be curled up in my bed growling at Jeremy Kyle when he pops up on the telly. And I do wish she’d stop calling me Pinklinka. Mind you, it’s better than some of the names the other dogs around here are called!

Anyway, I’m extremely unhappy about the weather and if it doesn’t get any better I’ll probably have to go away. Mrs. Woman and The Boss have obviously got the message as the other day I overheard them discussing a Caribbean cruise. He even checked his bank account online to see if he could afford one and I could tell from the delighted look on his face that the quids are definitely in. The thought of walking along a lovely hot beach with the waves gently lapping against my paws, was enough to get me salivating. Get me on that boat now, I thought. Sadly Mrs. Woman destroyed the illusion of tropical glory.

“What are we going to do about Pinkalinka?” she said to The Boss.

“What a question!” I thought “I’m going with you of course. We’re a family. Remember?”

“My PA?” Mrs. Woman grinned “Of course, what a wonderful idea. I’m sure Pinkalinka would much rather be with him than us.”

“Good grief” I groaned to myself despairingly “You two really don’t know me at all do you?”

σου σε θλίψη
(Yours in Sorrow)

Why Does My Dog…The Most Commonly Asked Canine Conundrums Answered

We all have questions about our dogs and why they do certain things and can't shake certain habits. This month we take some of...

How Well Do You Understand Your Dog?

The dog is a sensitive and intelligent animal that relies on communication within his pack to thrive and survive, so as his ‘best friend’...