Jo-emma Larvin is a woman of many talents. After spending several years working as a model, her love of the arts led her into a world of photography, interior design, writing and acting where she's gained many exciting roles including parts in TV dramas, music videos and mainstream movies such as The Calcium Kid (which starred Orlando Bloom), Goal 3 and Rough & Ready.

Jo-emma has also appeared in music video for Welsh legends Sir Tom Jones and the Stereophonics. She also played the lead female role in the music video for McFly's Top 10 single, 'Lies'.

In demand, we caught up with Jo-emma to find out all about the leading man in her life – her Golden Retriever, Sonny, and why she feels so passionate about animal welfare issues, such as puppy farming.

Tell us about your dog, Sonny - we'd like to know everything about him!

Sonny is an eight year old Golden Retriever who I've had since he was a puppy when I got him at eight weeks old. At the time I was living in Wales and I got him from a breeder in West Wales, although now I know more I would rescue, of course I wouldn't change Sonny for the world.

He was the smallest boy in the litter and he turned out to be huge. He's been like my shadow since I got him, it's like we're joined at the hip. He's a gorgeous boy and has such soulful eyes and such an expressive face.

I'm sure a lot of dog owners feel this, but I feel like we have a real connection, like I can look at him and I know what he's going to do before he does it. He's a real foodie, he's obsessed with food and he loves going for walks – if there's a puddle to jump in, he's happy. He's a proper lad, he likes to be outdoors.

My mum used to adopt stray cats when we were younger so I grew up around animals and as much as I love all animals, I always wanted my own dog so Sonny is my first dog.

I do love cats but I think there's something different about dogs, I think they're more of a companion maybe in that they're always by your side. 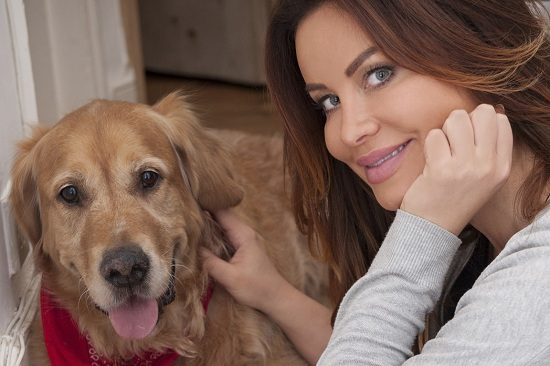 You've previously used your profile as a well known model and dog lover to support people such as C.A.R.I.A.D (Care And Respect Includes All Dogs) who actively campaign against puppy farming. Tell us a little about your work with them and what's next for the campaigning group.

C.A.R.I.A.D. are a great organisation who I got involved with a few years ago. I really like working with them because I think they do a lot of good and I wholeheartedly believe in the cause. I think puppy farming is an issue that's a lot wider spread than people think or believe, or even know about. Not everyone knows puppy farms exist and what the poor dogs they 'care' for go through. It is a really evil, disgusting industry.

I'm happy to be on board with C.A.R.I.A.D. because they're focused on education which is why next year their big campaign is 'C.A.R.I.A.D. 4 Kids' and I definitely think that educating kids when they're young enough to understand and start learning. The campaign will centre around safety and use creative art such as drama and photography, which is a big passion of mine, and I think by using things the kids can really get involved with and experience will give them a deeper understanding.

I'm keen to be as involved as I can because I really feel that when you're younger is where it all starts and the children are the future. It will also be really good to go back to Wales, I lived there for years and miss it.

Leading on from your involvement in raising awareness from puppy farming, you've also spoken out about adopting a dog. This time of year is a time when many people buy a puppy as a 'one gift fits all' present and leaves rescue centres inundated in the new year when many of these puppies are given up. What words of advice would you give to anyone who is thinking about getting someone a puppy as a present this year?

Owning a dog is fantastic and I love it, but it is a big responsibility. The dog will be yours for anywhere between nine years up to 16/17 years. It's not something to take on lightly.

If you do decide you want a dog, and it's for the right reasons, do your research and look to get a dog in the new year when everything is back to normal after the Christmas period. Visit rescue centres, they have dogs of all ages from puppies upwards and all breeds, or if you want to go to a breeder, make sure they're reputable. Definitely don't buy pets from a pet shop or ads in newspapers, that tends to be where you'll find puppy farmers advertising, so be cautious.

Do you have a motto that you live your life by? What would you say Sonny's motto might be?

Mine would probably have changed as I've got older, it's 'try not to judge others' and I think Sonny's would be pretty much the same.

I think that's the beautiful thing about dogs. They don't judge others.

As we approach the New Year, do you plan to make any resolutions? What would you think Sonny's would be?

Well, I think mine would be very similar to a lot of people and would be to do more regular exercise. Thank God for Sonny because walking him is great exercise but I could do with getting back to my regular yoga as well.

Sonny's would probably be to learn how to open doors himself and learn some self control around other people's picnics in parks.

James Cordon – Oh wow, well he's quite friendly and bouncy so I think he'd be a Cocker Spaniel.

Brigitte Bardot (dog lover and actress) – She would definitely be something cute and caring. I think maybe a Golden Retriever because they also have the blonde hair to match as well.

Cindy Crawford  – She would be something really pretty and sweet, like a Cavalier King Charles Spaniel.

Big dogs or little dogs – I do like small dogs but my personal taste is for big dogs because I love a big cuddly bear like a Golden Retriever or a Bernese Mountain Dog.

Pedigree dogs or cross-breeds –  I honestly love both.

Days off or days at work  – (Laughs) Days off! I do love what I do but it's nice to have a lazy day off.

Describe the last time you laughed out loud because of something you saw Sonny, or another dog do.

(Laughs) Sonny always makes me laugh. Sometimes it's just the way he looks at you, or he has the funniest expression if he doesn't get his own way with something, or it could be the way he sometimes throws himself on the floor if he wants a back rub.

If you had the choice to arrange a dinner party inviting three people (choosing from any era, past or present), who would you choose and why?

Oh wow! Well, I think firstly I'd invite Al Capone. I think he would have some very juicy stories to tell  being from a different era and a whole other world. Secondly I'd invite David Attenborough because I think he's brilliant – he has my dream job and I think I could talk to him for ever.

Finally I'd invite Jake Gyllenhaal if for no other reason than eye candy.

What are the most listened to tracks on your iPod just now?

My all time favourite Michael Jackson song which I loved to listen to is 'Give In To Me' and I really love Gotye's song, 'Somebody That I Used To Know'. 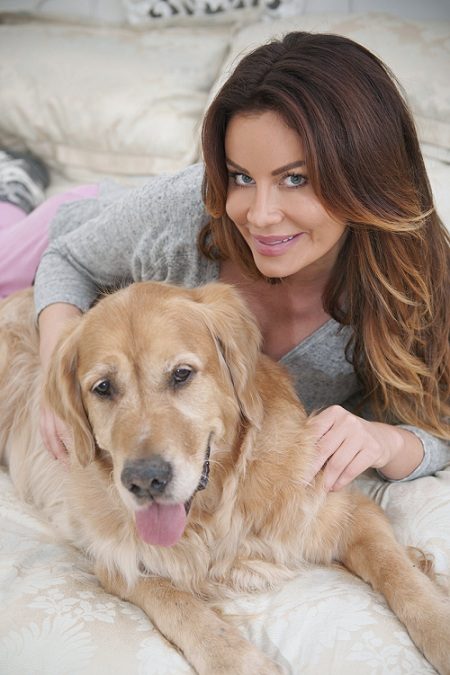 If Sonny were an actor, who do you think he would be and why?

I think he would be Sean Connery. Like him, Sonny has Scottish ancestry and he's quite sure of himself and distinctive. He's definitely my leading man.

Funnily enough the other day someone actually said he reminded them of Sigmund Freud.

I personally love the responsibility Sonny brings me. I think owning a dog gets you out and about, more people talk to you when you have a dog. I think dogs have a pure, unconditional love that they give. They're non-judgemental and I think they're such good companions.

Finish the following sentence, my dog is... awesome and the love of my life.

It would depend if I were asking him a serious question or a funny one.

If it were serious, I'd ask him to come up with some code so he could tell me what was wrong when he was ill.

If I were asking him something funny, I'd ask him where he carries my socks, shoes or anything to!

Being a Retriever whenever I come in he brings me something, it could be a sock, shoe, underwear, anything, and I'd love to know where he puts them!

The Company of Animals – For Their Tuffy Dog Toys