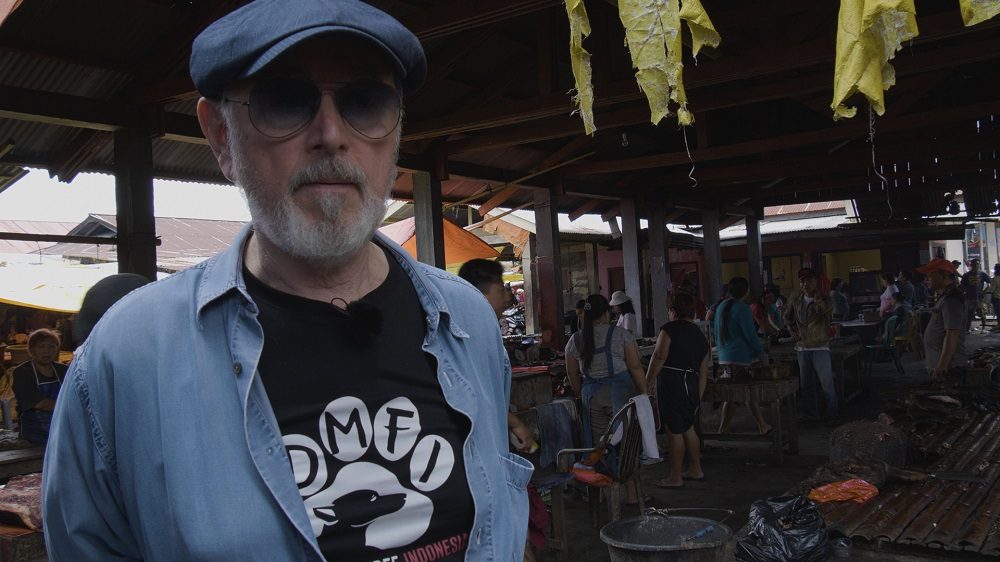 Peter Egan is a British actor who is perhaps best known for his roles in the hit TV shows, ‘Downton Abbey’, 'Hold the Sunset’ and ‘Unforgotten’, but also of course, ‘Ever Decreasing Circles’.

Always ready to speak out for animal welfare, alongside British filmmaker Andrew Telling and 'Dog Meat-Free Indonesia' (DMFI) campaigner and 'Change For Animals Foundation' founder, Lola Webber, he recently visited North Sulawesi’s infamous dog and cat meat markets in Indonesia, where it is estimated that the vast majority of dogs are stolen pets.

The horrors in animal markets

Speaking at the horrors he saw when he visited the notorious Tomohon’s 'Extreme Market' and Langowan Market in Minahasa Regency, animal lover Peter, who has been an ambassador for DMFI said:

“I had been warned about the conditions for the animals at the markets in North Sulawesi, but nothing could have prepared me for the sickening horrors I witnessed. This part of Indonesia is world-renowned for its breathtaking volcanic mountain landscape, stunning dive waters and beautiful beaches, but the ugly brutality of the dog and cat meat trades will haunt me for the rest of my life.

“The absolute indifference to animal suffering was so utterly shocking and heartbreaking. I saw countless dogs and cats waiting to be slaughtered, to lose their lives in the most brutal and cruel way. There was nothing I could do to take away their pain, but their pleading eyes and the stomach-churning smell of blood and burning dog hair, are scenes of hell that I shall never forget. I am committed to exposing these horrors and to working with the Indonesian and global community to fulfil our united goal of ending the abhorrent cruelty of the dog and cat meat trades.”

Together, Peter and Lola rescued four dogs who, despite the circumstances they had found themselves in only hours before, were craving human affection and love.

The dogs have now been named Mars, Hope, Cinta (which means love in Bahasa) and Louis / Photo Credit: DMFI

Lola updated us on how the four dogs are doing now and shared more about their rescue.

“By the time we arrived at Langowan market – one of 200+ dog and cat meat markets in the province of North Sulawesi – most of the dogs had already been slaughtered for the day but there were about 10 dogs who were still caged and awaiting slaughter. Customers come and pick a dog they want to be slaughtered and butchered as generally, consumers like to see the dog alive that they are going to eat.

Peter, Lola and the rescued dogs on their way to the shelter / Photo Credit: DMFI

“It is the most indescribable experience being surrounded by caged dogs, the floors and cages – and their faces – splattered with blood from animals who have already been bludgeoned to death. It is overwhelmingly sad. So much suffering. And knowing that already these dogs have endured so much – from being stolen from the streets and people’s homes in surrounding provinces and surviving a gruelling journey – sometimes having lasted for days – only to arrive at markets like these where they tremble in fear as they watch their cagemates being slaughtered.

“It hurts profoundly not to be able to save them all and to make their suffering end."

“On that day, Peter and I – with help from our friends from the local (and only) animal protection group in the province, ‘Animal Friends Manado Indonesia’ (AFMI) – secured the rescue of four dogs. One of the dogs had had his front paw cut off by traders so that he couldn’t escape.

Peter with Mars and Frank with another rescued dog who had had his back paw cut off / Photo Credit: DMFI

“Once we had secured their rescue, we drove them to AFMI’s shelter where all their dogs and cats are offered life long care as the majority of animals are never adopted; and because of rabies laws and regulations, we cannot legally move dogs to outside the province.

“After they were fed and watered, they were given somewhere quiet and clean to rest before receiving a veterinary check over and care plan as needed. The quarantine regulations mean they are then quarantined for rabies and other transmittable diseases for four weeks before being introduced to the other residents at the shelter.

Lola and the four rescued dogs at the shelter waiting for their vet checks / Photo Credit: DMFI

“One dog we rescued that day, a beautiful puppy, was immediately adopted by a local family who volunteers with AFMI. We named her Mars and as soon as her time in quarantine is up, she will go and live with her forever family, including another puppy called Pluto.

Lola and Mars hours after her rescue / Photo Credit: DMFI

“It’s estimated that 80-90% of the dogs at the North Sulawesi markets are stolen pets and the majority are taken there from other provinces, which is totally illegal and means that they have to endure journeys sometimes lasting for up to four days, with no food, water or rest.

“I believe these four were definitely stolen pets. Two of them – including the one we named Mars – were wearing collars.

“What was incredible about the four dogs we rescued was that within less than an hour of arriving at the shelter, they seemed to crave human touch and licked my hand and lent in for affection. It is absolutely heartbreaking and so shameful. We have so much to learn from dogs.”

The future of the dog meat trade in Indonesia

“We (Dog Meat-Free Indonesia coalition) have secured pledges from Central and provincial governments to take action and they have stated that in Indonesia, dogs and cats are not recognised as 'food' and the Central government has issued a Directive stop to provincial Governments to take action to tackle the trades and discourage dog and cat meat consumption wherever it is popular.

“We are now working with provincial and central Governments in key dog and cat meat ‘hotspots’ to ensure words and promises of change are followed through with impactful actions.

“Based on current laws and regulations, most of the trade already operates illegally; and so now we are committed to working with law enforcement agencies, local animal protection groups and other key stakeholders to ensure these laws are adequately enforced."

A call to plea and awareness

"This requires socialisation of laws and ongoing public awareness campaigns to warn people of the dangers of the dog meat trade – notably on the form of rabies transmission (of Indonesia’s 34 provinces, only eight are rabies-free) – as well as continuing our nationwide efforts to promote a more compassionate attitude towards companion animals – and all animals – so as to ensure these cruel, dangerous and brutal trades are banished to the history books once and for all.”

Pledges of action have been made by those in power but we need to make sure these result in real and impactful change for those in such desperate need… and change can’t come soon enough!

In this article:All Ages, Issue 144