Anyone who’s read my features in K9 Magazine will know that my dog, Falco has done more than his fair share of travelling.

But there’s one country that until this Easter we’d still not taken him to and as we discovered, it’s one of the most beautiful countries in Europe, as well as one of the more dog friendly; and infinitely better than Spain where beaches and transport is concerned, writes dog lover and travel writer, Paul Wojnicki.

Along the way, we discovered some of Spain and Portugal’s most dog friendly companies such as Pousadas of Portugal, as well as many of the UK’s; Eurocamp, Brittany Ferries and Travelodge, being three of my favourite.

Our journey begins with a long drive south from Yorkshire to Portsmouth, which is too arduous on all of us to even contemplate without factoring in rest breaks every two hours. So instead of setting off on the day of the ship’s departure we drive down the day before, heading to the New Forest for a night in the local Travelodge.

Travelodge is the UK’s third largest hotel chain, but by far the largest dog friendly chain in the UK, with over 30,000 dog friendly bedrooms. It might not be the Ritz, but ours is a great room for the price and unlike most hotels in the UK, all Travelodge’s have family rooms that can accommodate two adults with two children in one room as well.

For anyone who hasn’t used Travelodge with their dog already, it pretty much works like this; you pay an extra £20 on top of the room rate, whether you are staying for a night or a month. This seems a much fairer system than some hotels use - charging per night rather than for the visit - and it obviously works out more cost effective for longer stays. As it happens, we are only here for one night but at less than £50 all in - I’m ecstatic with the cost.

We spend the following day exploring the New Forest, which has hit the headlines again this year for an ongoing tick epidemic. Fortunately it was March when we stayed and the problem is at its peak in late Spring and Autumn, but we take the precaution of administering a good quality tick-control product throughout the year. We also check Falco regularly by finger tip searching him every evening and removing any parasites with a special tool for unscrewing them. It’s not as laborious as you might think and is actually a pleasant bonding experience that Falco always enjoys - what dog doesn’t enjoy being stroked?

Once we’ve completed our two hour walk it’s time to head to Portsmouth and enjoy lunch before catching another of the UK’s most dog friendly institutions - the Brittany Ferries service to Spain. This route has become legendary among dog owners over the last decade or so because they are the only company operating from the UK that allow dogs in (some) cabins.

That said, we’re out of luck this year and the cabins have all sold out before we have chance to book one, so it’s a first for Falco on this route, staying in the onboard kennels.

I didn’t like the idea of leaving him in the kennels for the voyage and most of the fellow owners seem to feel the same way but to be honest it’s nowhere near as bad as it sounds.

For a start, the crossing is around 24 hours but we’re only asleep for 8 of those hours and for the rest of the time we take turns sitting with him in the spacious exercise area, socialising with his fellow inmates - er...er...I mean shipmates.

The other (unexpected) bonus for families is that we are able to have dinner together for an hour while Falco waits in his kennel with his new mates. I never dreamed of doing this when he was in the cabins, as I felt sure he’d bark the place down and annoy our neighbours. And so the sailing goes pretty well, a few large waves aside, but it is only March after all. But even though it’s a pleasant crossing, we’re all happy to see the northern coast of Spain appear on the evening of arrival.

After a brief walk around Santander we press south across the snow-capped Pyrenees for a night in another hotel chain renowned for its friendliness toward pets. The Accor group has a massive selection of hotels around Europe and many of them are happy to accept dogs; the ibis in Valladolid being no exception, indeed this particular location seems to have built up something of a reputation among travellers heading to the south of Spain or Portugal; I count five other dog owners staying there on the evening of our arrival.

It’s Easter, so the following morning we enjoy one of the traditional parades that Valladolid has become famous for over the years. Easter is one of the most spectacular and emotional fiestas in Valladolid and members of various brotherhoods parade through the streets carrying religious statues to the sound of drums and music. Falco has no problems with the music and bands as they make their way through the streets and the brotherhoods and spectators have no problem with Falco being there either. 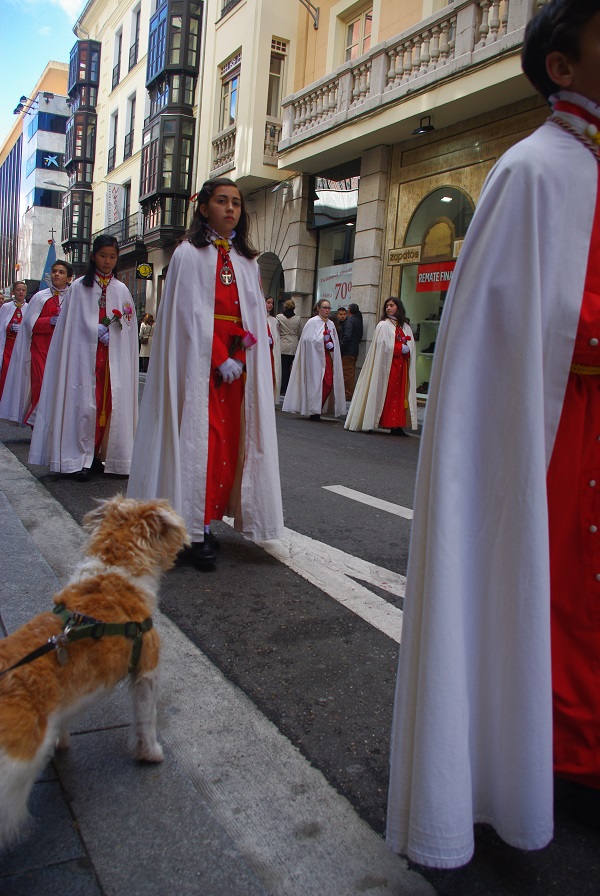 After lunch we head to nearby Simancas, a local castle and village just south of Valladolid, pictured below, which is just off the motorway on our journey south. The picturesque streets here are always deserted at lunchtime, as Valladolid is known for its adherence to the traditional siesta, as well as its traditional use of the Spanish language - think Oxford English. Consequently, we have the entire hilltop village to ourselves, including the 15th century castle. 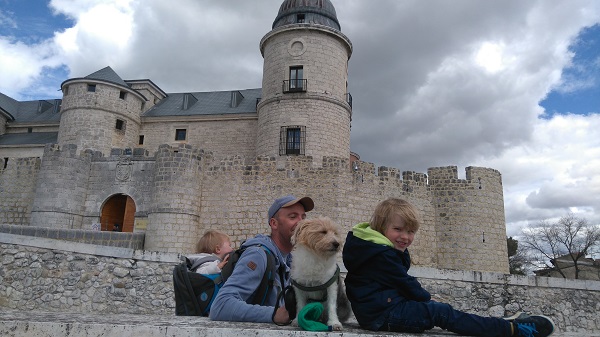 Afterwards, we head further south to Merida, a city famous for its well-preserved Roman ruins. We park by the Roman aqueduct and are pleased to find that we can wander among the ruins with Falco, who also delights in dipping his toes in the stream. Afterwards, we walk to the magnificently preserved Roman theatre but are disappointed to learn that dogs aren’t allowed inside. Undeterred we take it in turns to visit while the other waits outside with Falco, eating dinner in the cafe just by the entrance. 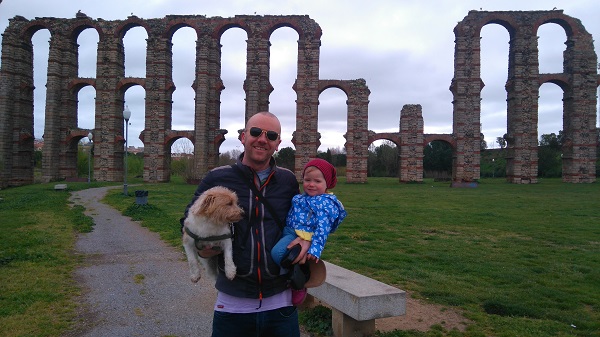 There are no chain hotels in Merida, its international tourist industry perhaps inhibited by the lack of any local airports, so we stay in a local B&B that is one of only five in the whole town that accepts dogs, and certainly not one I’d recommend in this article. Its times like this that I thank God for companies like Accor and Travelodge.

The following day we press on to our main destination, Lisbon - or more accurately Guincho Beach, thirty miles west of Lisbon - to stay with another fantastic dog friendly UK company, Eurocamp, who have dozens of dog friendly camps throughout the continent. Indeed, Eurocamp is one of the only UK companies of this type that allow dogs in their mobile homes, with many competitors only allowing them in tents. Personally, I have no problem with a tent, but Falco appreciates air-conditioning when we are in warmer climes and who am I to disagree? 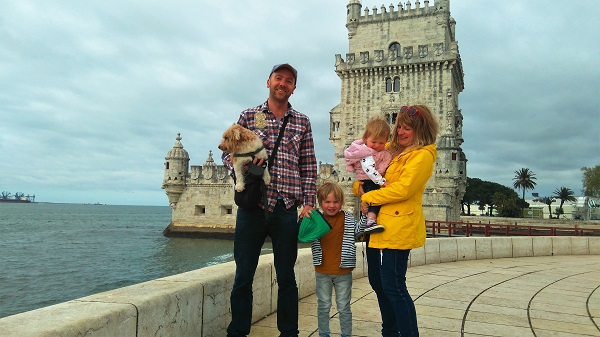 Not that we have any need of air-conditioning on the day we arrive, as it’s a relatively mild 15 degrees - did I mention that it’s only March after all? So Falco has a whale of a time running around in the nearby sand dunes before we all retire to the caravan for the night.

We all feel at home in no time, which is just as well because we’ve booked for ten nights, and Falco is loving the freshly cooked mince that I’ve spread across his biscuits. He gets spoiled at home and loves warm food, which is why we love to stay in mobile homes whenever possible. Not only does Falco get all his favourite treats but we save a fortune on dining out.

And with all that money saved it means we’ll be able to enjoy more of what Portugal has to offer, but to find out about that you’ll have to wait until next month’s issue.