Tiffany Toth’s life changed when she became Playboy’s September 2011 Playmate, taking her all around the world modelling for well-known brands and magazines, such as Guitar World and making appearances on TV shows, including Tosh.O and The Daily Habit.

After spending years in front of the camera, Tiffany used her experience to switch roles moving behind the camera launching Gray Love Photography.

When she’s not working or travelling, Tiffany spends her time relaxing with family and her four beloved dogs, who can often be seen across her social media, which is where we first discovered the model’s love of dogs.

K9 Magazine's Kim O'Meara caught up with the model during some downtime in California to find out more about her dogs and ask her to share her top 3 pet photography tips.

Hi Tiffany! Thanks so much for your time today. We know you're a massive dog lover, please tell us about your own dogs.

I have four dogs and three are rescues. My first dog was Marley who is the Bugg, (Boston Terrier/Pug mix). My husband gave him to me almost eight years ago. 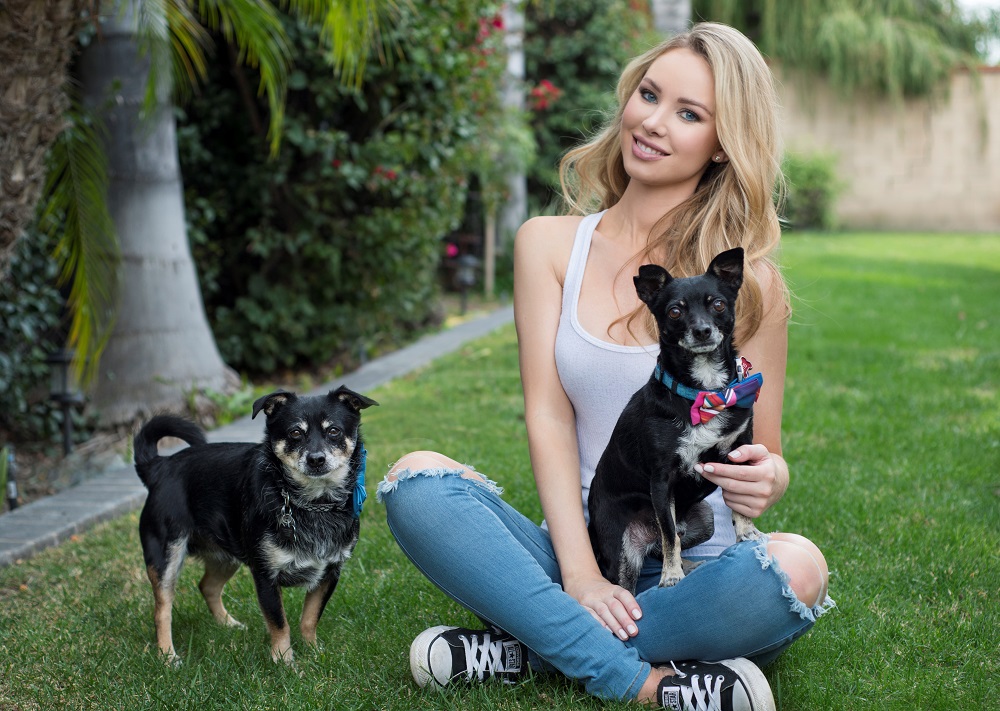 Then along came his Chihuahua brother, Jax who I found at the local pound. My third boy, Otis wasn’t planned. I found him at a pound in LA after seeing his picture on the internet.

I was trying to chase a little dog I saw running on the freeway. He ran off somewhere and I couldn’t find him, so I had called animal control hoping they could get him off the freeway.

Hoping he got picked up and taken to the nearest pound, I went looking but never found him, then I came across my little guy who had been at the pound for quite a while so that’s how I came to own Otis.

So you’re a big rescue fan then – we love that. And we know you have a fourth dog, how did you come to own her?

I found my girl Penny while volunteering at the EDL Foundation. She had been at the rescue for over a year and I was originally fostering her but then I couldn't give her up. She's a Miniature Pinscher Chihuahua mix.

How did your love of dogs come about? Have you always owned dogs?

Since I was a kid I’ve always loved animals but I never had a dog growing up. I grew up with cats instead but I had always wanted a dog, so once I had a dog I was hooked (laughs). 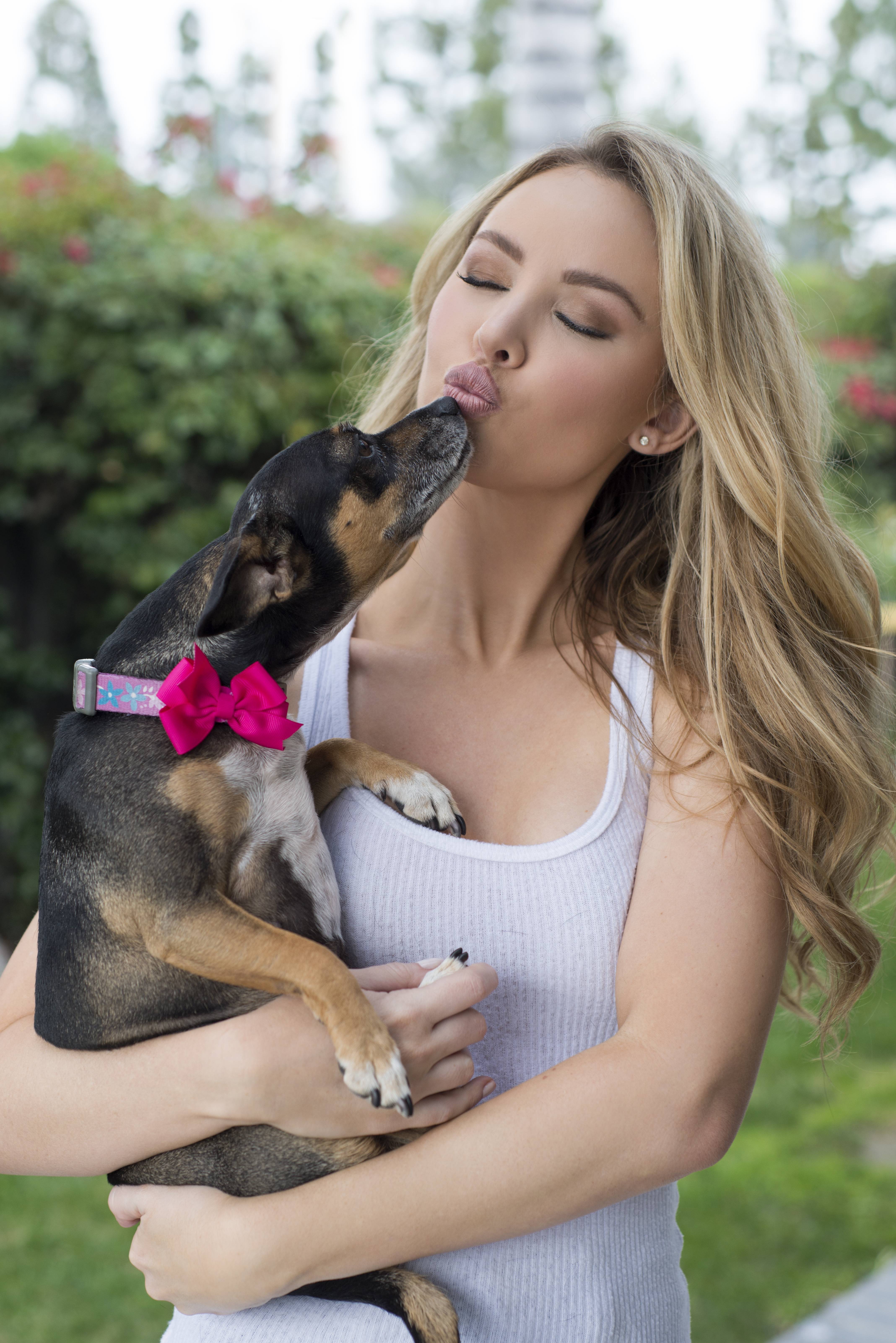 Most people will know you for your work as a model and time as a Playmate, but what does your average day look like?

Well, as with most dog owners, my day usually starts with the pups. I will usually make my coffee and sit outside on the porch of their dog house and play with them and then I'm off! If it's not for work, one of them usually comes with me.

I imagine when you became a Playmate your life changed quite a lot. How do you manage to keep a fairly routine lifestyle for your dogs?

If I'm not at home, instead of boarding them which stresses my Chihuahua guys out, I will have my parents come to my house to watch them so they are still in the comfort of their own home.

Where do you think is the most pet friendly place you’ve visited? 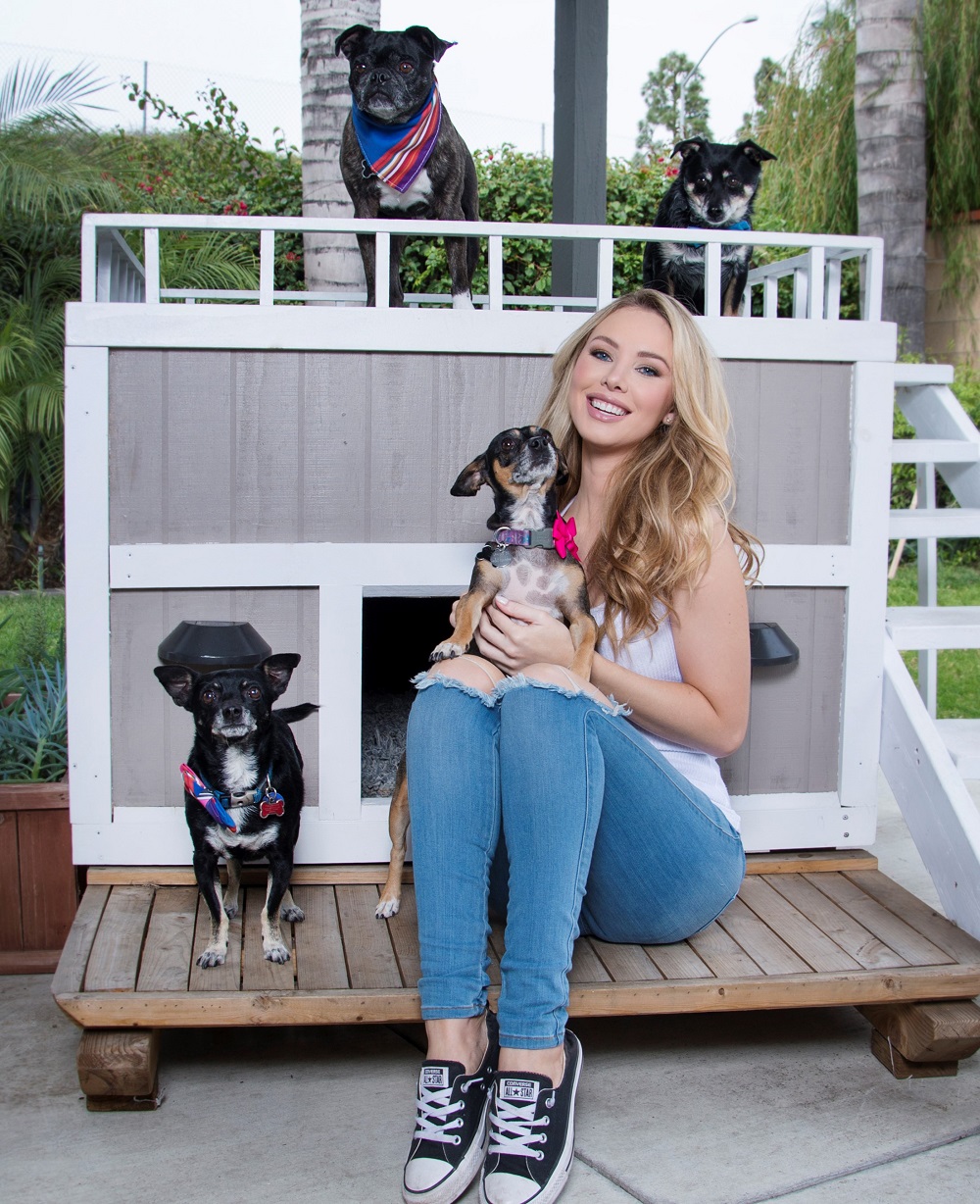 Alongside your modelling work, we know you’ve moved from one side of the camera to the other because you’re also a photographer. What do you think makes a great photo?

Well, for me I think any photo that captures a special or funny moment are the best!

Totally agree. Since we have you here and you’re a pro, what would you say are the three most important tips you can share for anyone looking to photograph their dog?

Well, firstly I would say – and this depends on your dog – but definitely have some kind of a theme, whether that’s with cute dog clothes or not.

Now, moving onto some of our more playful and quick-fire questions, are you ready?

There are so many things, aren’t there. I don't even know where to start, but I’d say the best is the feeling you get when you rescue a dog and give them a life they could never imagine.

We know what you mean, it’s very rewarding, isn’t it?

TV show - Anything on the Food Network or ID channel.

Book – Well, I’m currently looking for a good book so open to recommendations!

And what are your dogs current favourite: 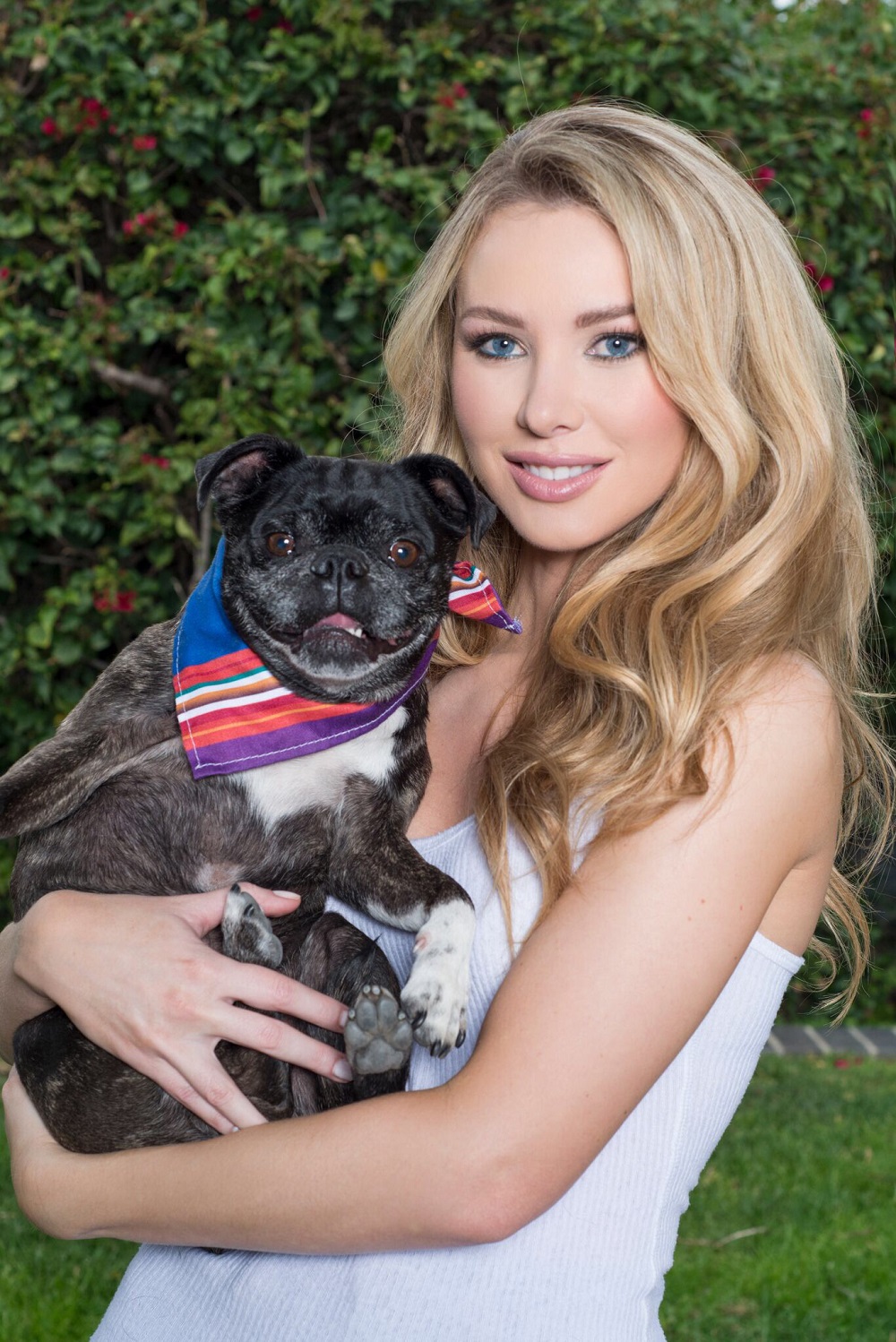 Finish the following sentence: my dogs are... super bouncy. (laughs)

What one life lesson do you think we can (or should) learn from man's best friend?

I would say to live in the moment. Show people you love them instead of just telling them. 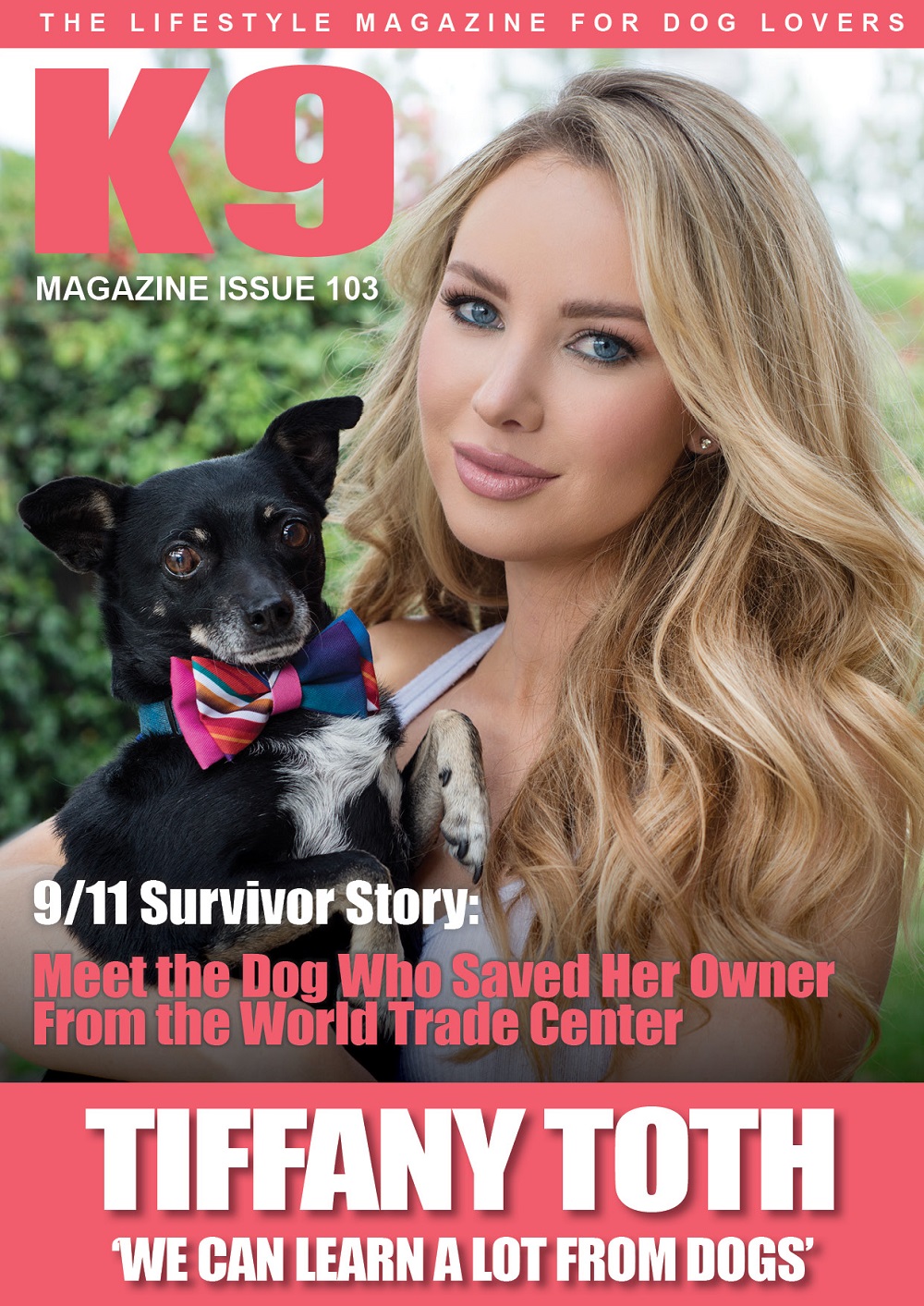 And finally, if your dogs could talk and answer one question and one question only, what would you ask them and what do you think they’d say?

I would ask where they were or who they were living with before I adopted them – oh, and who peed on my couch?! (laughs)