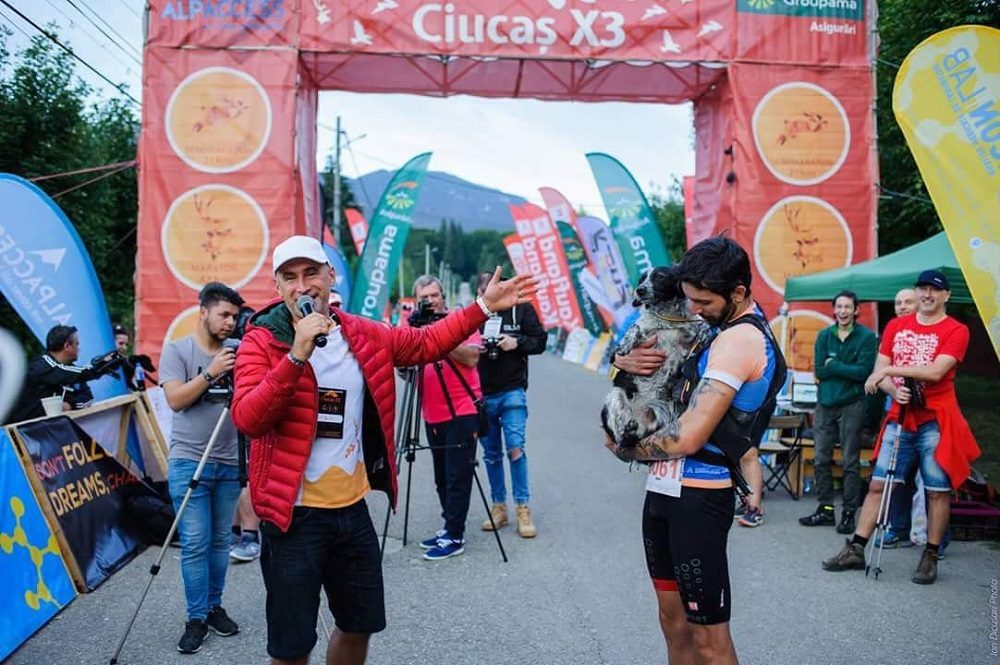 A stray dog who joined the 105km ultra mountain marathon in Romania last year has found a new home.

Dog lover Adrian Irimiea, who also owns a rescue Whippet and Greyhound, named the stray dog Ultra, after their mountain journey together.

Adrian recently ran the London Marathon to help more dogs like Ultra in Romania. He shared their story with us.

Hi Adrian! Thanks for talking with us. We’re really intrigued to learn more about your story.

You met Ultra when she joined you on a marathon, what happened when she started running with you?

Well, I did not think that she was going to run such a long distance in truth.

At 40k it was later in the race after we got lost and she helped me get back to the track, that I decided to run with her no matter what happened.

How long did you run together for in the Romanian mountains?

We ran for about 105km [the equivalent of just over 65 miles) with a +4800m positive elevation in 13 hours and 15 minutes. Together, even after getting lost, we finished in 3rd place.

At what point after the marathon had finished did you decide to adopt her?

Well, I had already decided to adopt her around the 70k mark, so we just tried to rest and to eat something because we were both very tired.

You’ve just finished running the London Marathon in support of the rescue, K 9 Angels who run a dog shelter in Romania. How did you learn about their work?

I know a rescuer they helped.

It was only after I made the page ‘I Am Ultra’ on Facebook and told our story, that somebody said to me that a foundation from UK wanted me to run a marathon to raise money for stray dogs - I did not know it was the London Marathon!

The goal [from the London Marathon] is to raise enough to help as many dogs as possible, because they are really in need.

And finally, giving the last word to Ultra, what's the most important thing she has taught you since coming into your life?

You need to slow the speed that you’re going at in life so you can see the details.

I'm referring a the qualities of being human and not caring so much to be the best or have the most, instead to not ignore [those in need], to care and help...you never know who changes your life.

Jess Impiazzi is a girl on a mission. She likes to spend her time with the people she loves, doing what she loves and...

What Is A Fire Detection Dog? Let’s Meet Some & Find Out!

Not all heroes wear capes, some wear special boots and work for the simple reward of a tennis ball. Meet Kai, Sherlock and Reqs...

How Can I Find out What Breed My Dog Is?

This month we are looking at DNA testing, what’s involved and some of the benefits of knowing your dog’s heritage. I had never really...