The fate of 149 dogs, including 15 new born puppies, has been forever changed after being saved from South Korea's Bok Nal festival this year after the dog farm owner had a change of heart and called upon help to save the dogs.

Once destined to be sold to a dog meat trade market in time for the Bok Nal days festival, the dog farm owner asked the Humane Society International to save the dogs and help him to close his farm in rural Yesan.

The dogs will now be flown to animal shelters across America to help them find new homes and the 15 puppies and their mums will follow shortly when the young pups are old enough. Until then, they will be kept safe in foster homes. 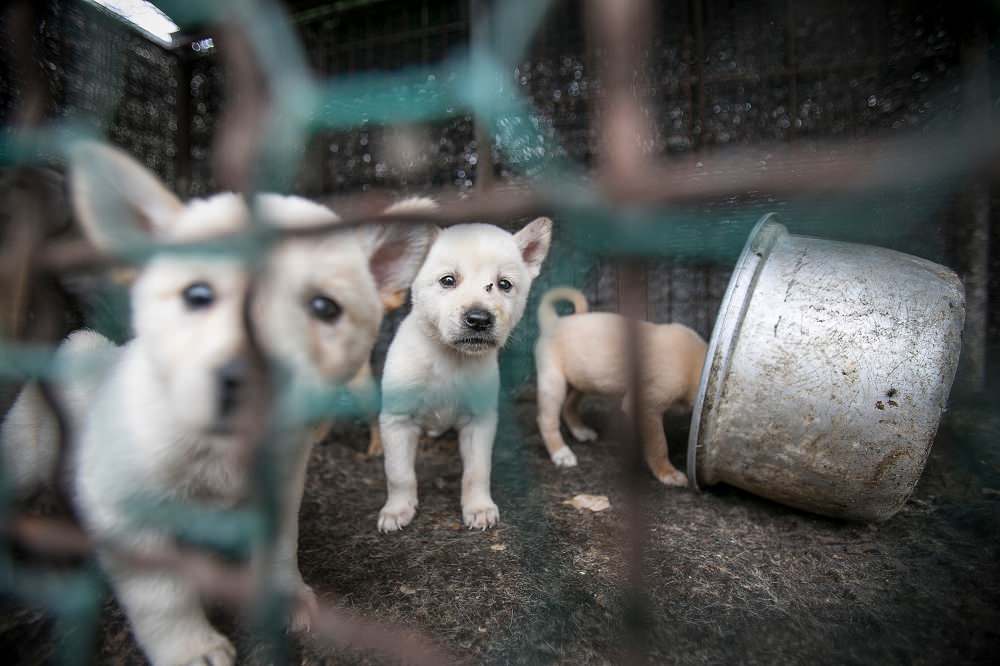 This is the ninth dog meat farm that HSI has permanently closed since 2014, rescuing and rehoming nearly 1,000 dogs by working in cooperation with dog meat farmers keen to get out of the trade. This latest Yesan farmer is considering a move into crop growing, and if so the organisation will help him with a business plan - a move to help encourage and inspire long term change by offering support and guidance as an incentive to change their path and save future dogs from the fate millions have already suffered.

Other dog farmers the organisation has helped have since moved into humane livelihoods, such as chili plant growing and water delivery.

The rescues and farm closures are part of HSI’s broader strategy that aims to encourage the South Korean government to end the cruel dog meat industry. 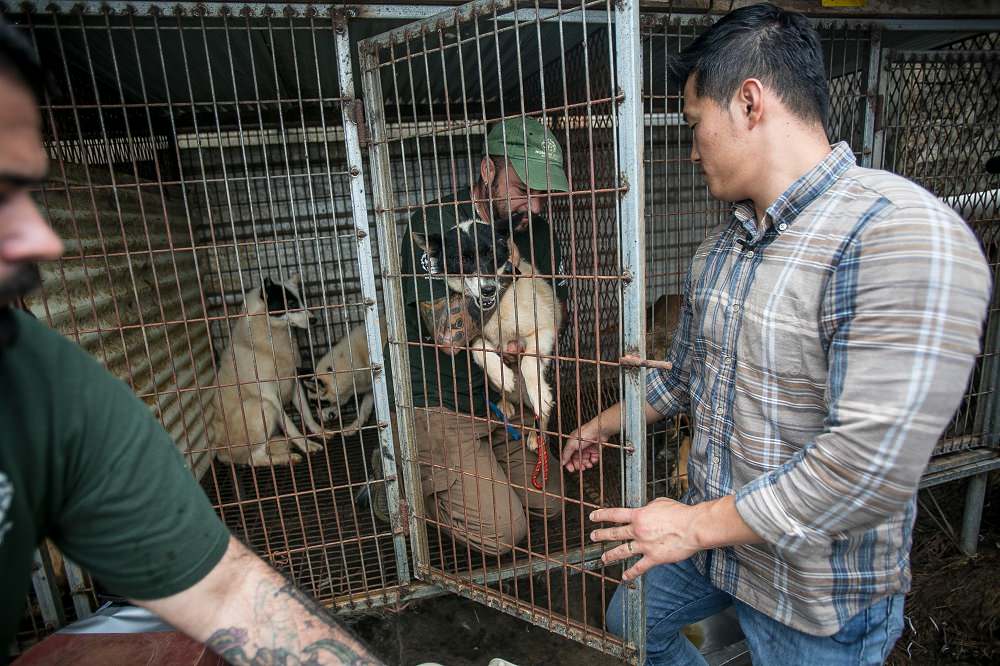 Nara Kim, HSI’s South Korea dog meat campaigner, said: "With every dog meat farm we close, we are not only saving the lives of these poor, terrified dogs caught up in this cruel trade, but we are also presenting a successful blueprint for change that we hope the government will follow. Eating dog is a dying practice in Korea, especially among young people.

"However, the Bok Nal days of summer still lead many to eat dog meat soup in the mistaken belief that it will invigorate the blood in the sluggish heat. Our campaign shows them the disgusting conditions in which the dogs are forced in live in their own faeces and their pitiful suffering, and it is changing hearts and minds." 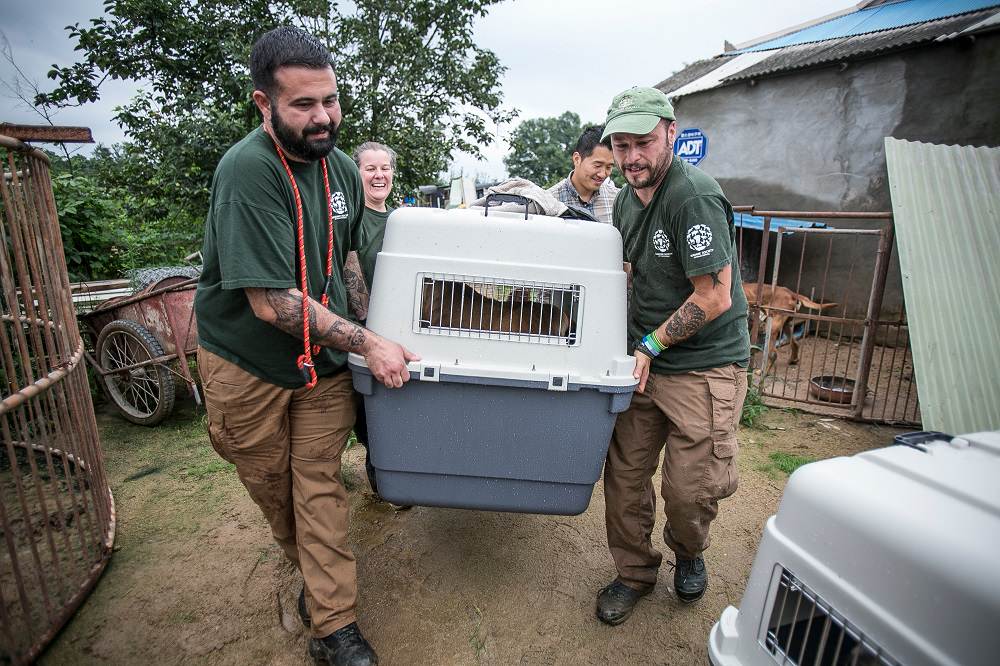 More than 2.5 million dogs a year are reared on thousands of dog meat farms across South Korea. The farm in Yesan is a typical dog meat farm with row upon row of bored, frustrated, frightened dogs in barren metal cages, many with injuries and deep pressure sores. 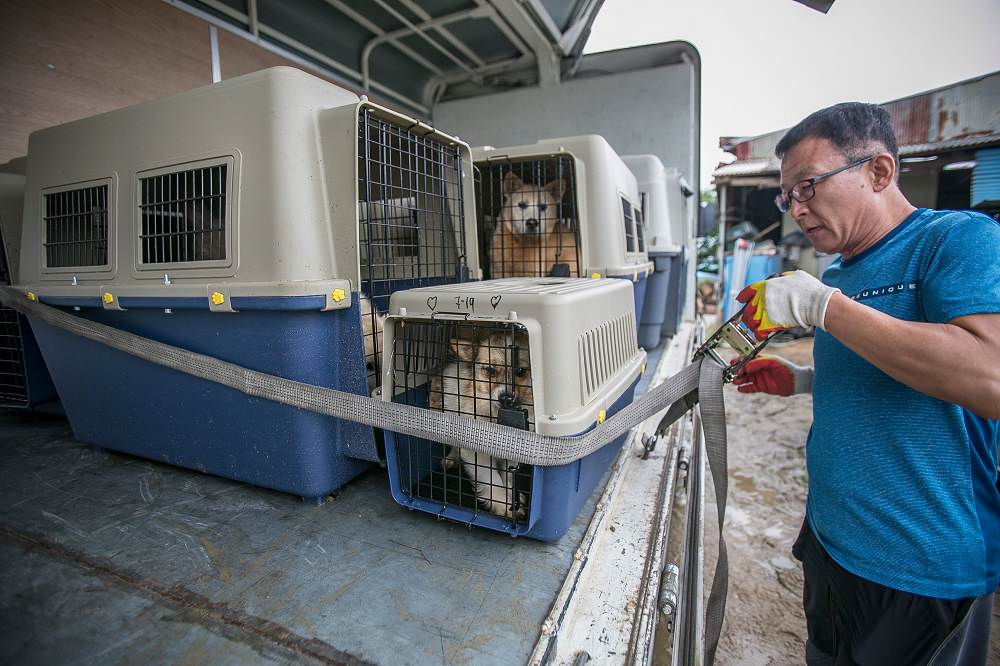 Meet some of the dogs saved

Emily is a beautiful young mastiff-cross suffering from painful skin diseases and swollen paws. She was found her cowering in her cage, too afraid to lift her head or make eye contact. 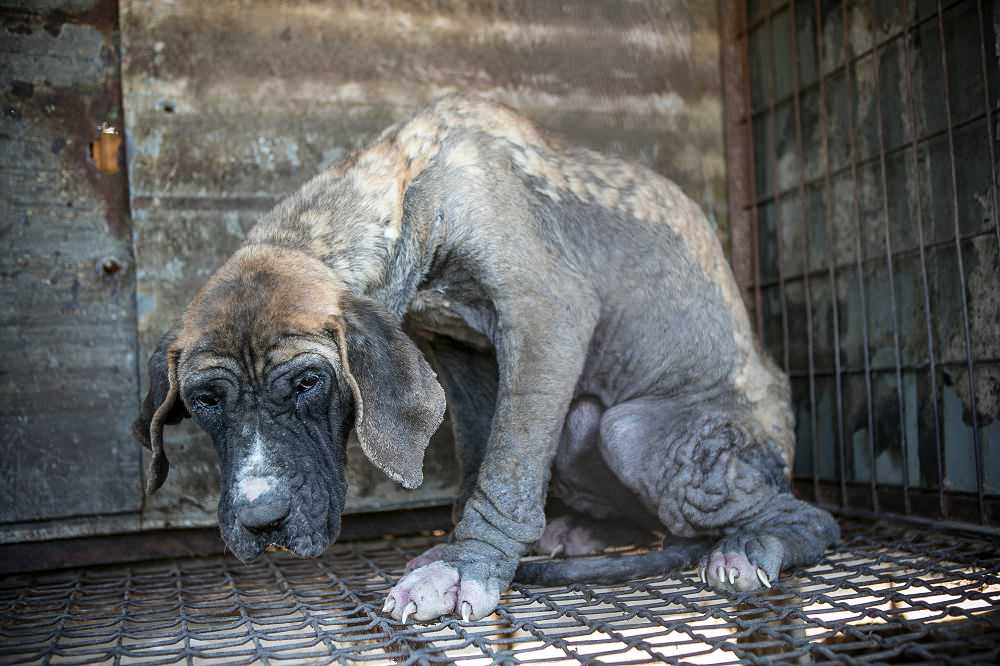 Angel is a 4-month-old puppy who has been kept in lonely isolation, so desperate for company that she leapt into the arms of her rescuer when they first opened her rusty cage. 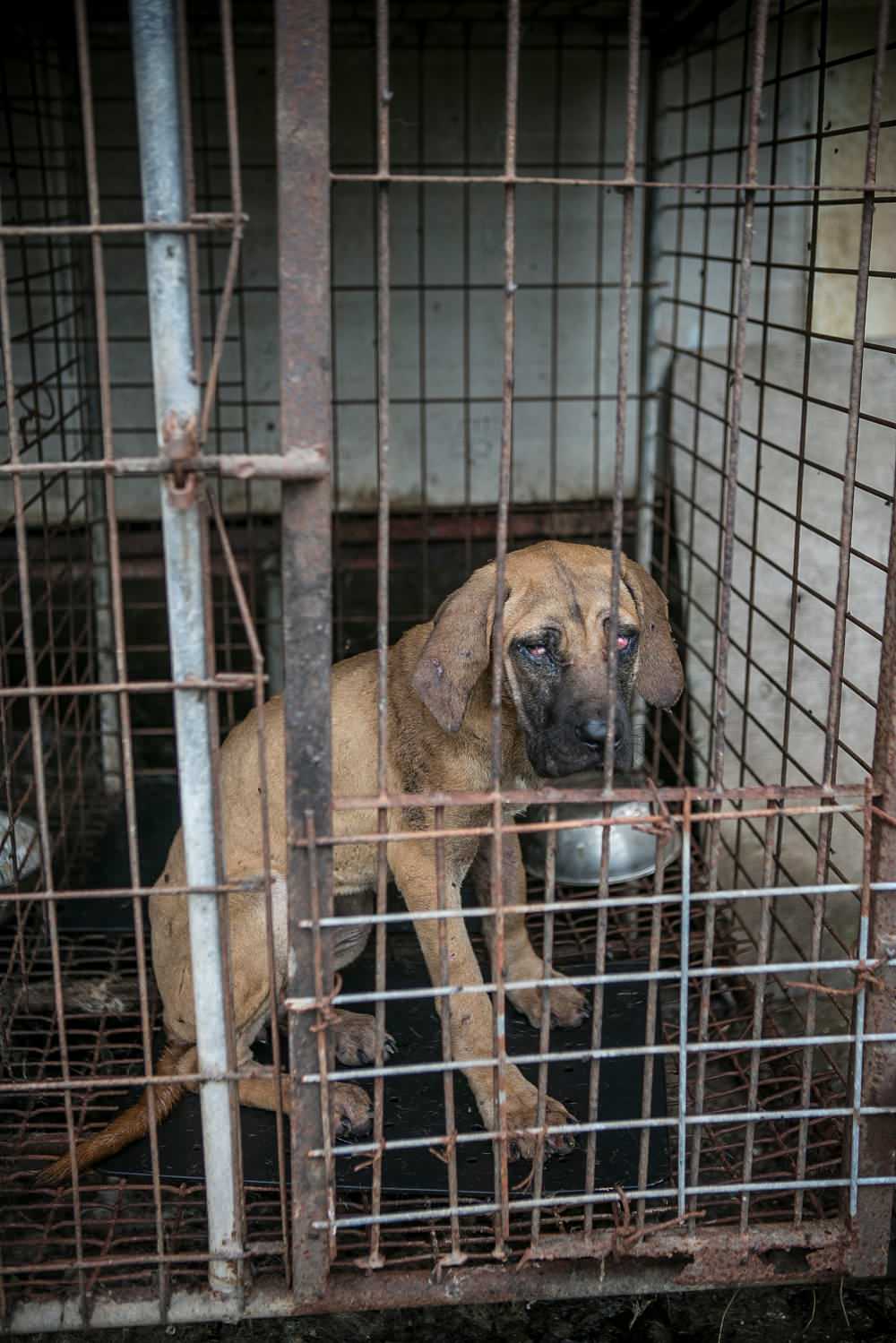 Both Penny and Maxwell were tied up at the farm before being rescued. 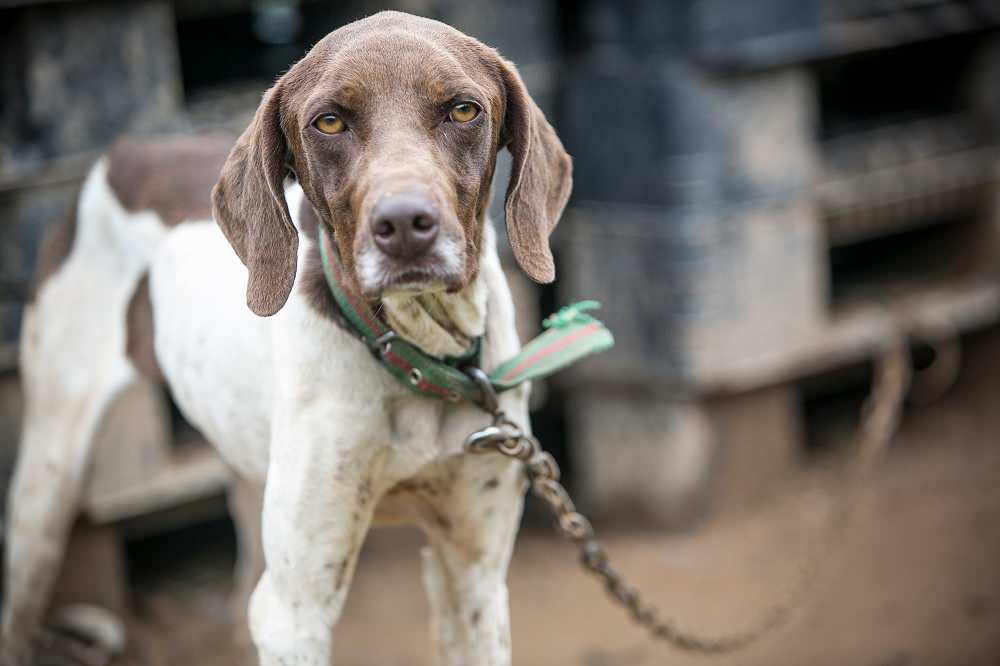 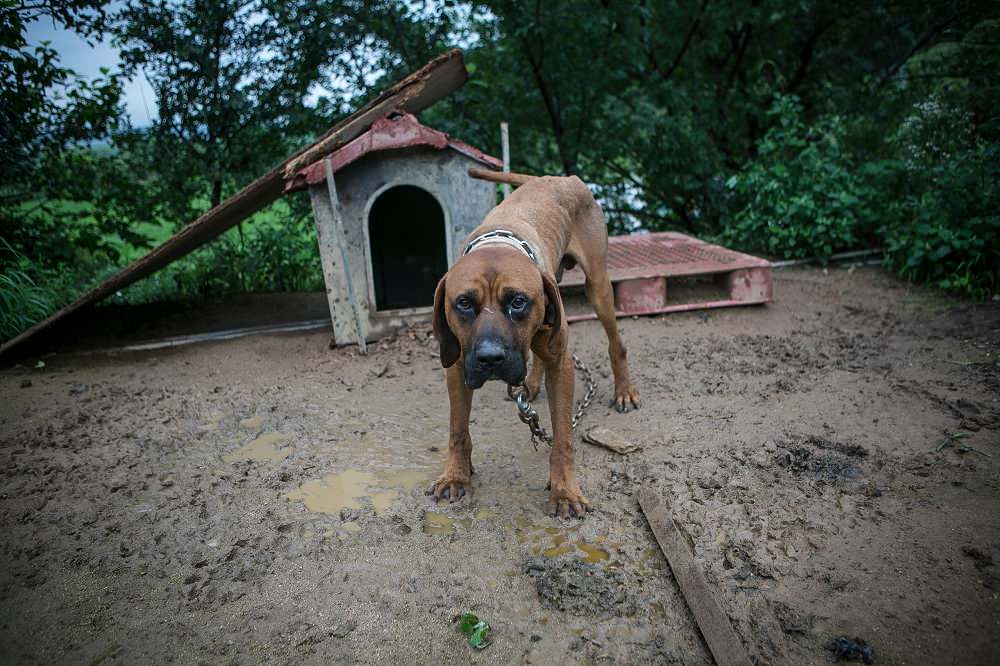 Opposition to the dog meat trade is growing among Korean citizens and politicians, and even the newly elected President Moon Jae-in recently adopted a dog named Tory who was rescued from a dog meat farm.

Nara Kim said, "Some people say that dog eating is Korean culture, but you won’t find many young people who feel it’s a cultural habit we want to hold on to.

It’s intellectually lazy to use culture as an excuse for cruelty because all cultures evolve over time and we often shed practices of the past. We are hopeful that things will change, and that the new Korean president will advance a new culture of compassion to animals. I am so happy that for these dogs the dog meat trade is over, but we have to fight on for the millions who are still suffering." 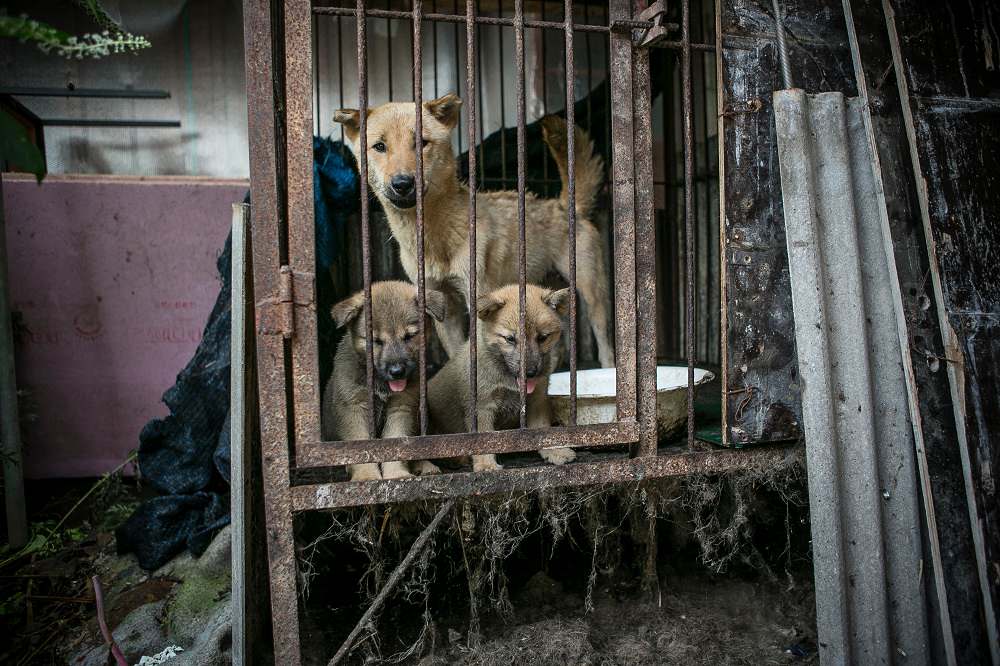 Across the summer, HSI is taking its campaign to the streets of Seoul to raise awareness. An eye-catching advertising poster featuring Korean-American actor Daniel Henney recently launched on the Seoul subway. A positive move which is seen by some to be influencing change from the inside, culturally.

Petitions are also running in English and Korean jointly between the organisation and Korean Animal Rights Advocates. 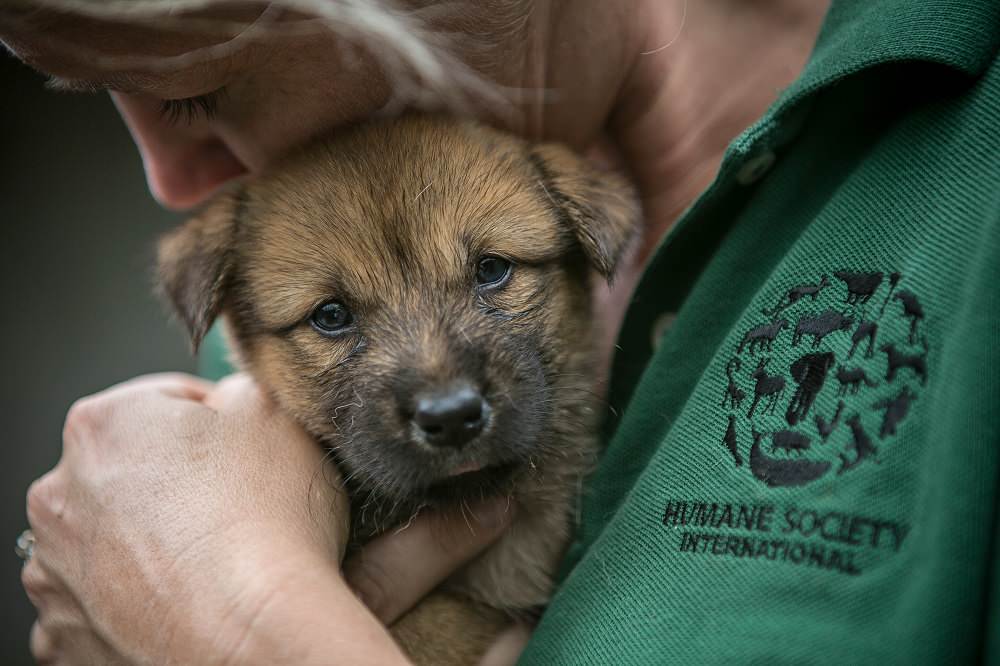 The charity tells K9 Magazine their next initiative will be to invite Seoul’s citizens to experience the grim reality of dog farm life for themselves by trying out their iDog virtual reality experience.