If you've got a television, you probably know who Andrea McLean is. Former weather presenter and current anchor for the ITV smash – Loose Women – it's like she's never off our screens. An animal lover from a young age, Andrea was destined to own animals as an adult. Hugging strays in Trinidad, naming pets after pop stars and fantasing about life as a Chocolate Labrador, Andrea certainly has interesting take on dogs. Kim O'Meara caught up with her discuss her hectic life and he she manages to fit it around Jackson, her Labradoodle.

Tell us about your dog. Name, breed, age and everything about them!

Our dog is a Labradoodle called Jackson. We named him after the late, great Michael Jackson as my son, Finlay who's 9 years old was a huge fan when he died and we got Jackson a few days after. He is almost two years old, and is the third child in our house! He is very much a part of our family.

When did your interest in pets begin and how long have you been a pet owner?

I have always loved dogs. Our first dog was a stray who turned up at our house one day and never left. I grew up in Trinidad in the Caribbean and was always cuddling strays and frightening mum and dad to death. We also have a very old cat and two goldfish.

Our readers will know you from your hosting role on Loose Women. I imagine with a job that's as varied as that, every day must be like having a brand new job! Did you always know you wanted to become a TV presenter? What advice would you give to wannabe presenters?

I didn’t plan to become a TV presenter, I always wanted to be a journalist, and that was what I moved down to London to do. I became a presenter by fluke - a chance came up to have a go at it, I did it, got the job and have been doing it ever since.

The best advice I can give to anyone who wants to be a presenter is to get whatever experience you can, either in radio or TV, and be prepared to work for very little money, making lots of cups of tea, and just turn up on time, keep smiling and always do more than you are asked to do.

They say in TV there is always someone behind you who will do a job that you don’t want to do, and it is true, no matter what that job is – so make sure you do it!

Do you have a motto that you live your life by? What would you say Jackson's motto might be? 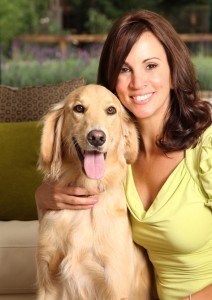 If you were to swap roles with Jackson for a day, how do you think he'd cope being you and what would you most love about being him?

Jackson would love being with all the Loose Women who would cuddle him and make a fuss of him all day. And I would love being left alone in the house to sleep in my bed, getting up only to eat and have a little walk. Lovely!

For this question, we ask our celebs to match up the following people’s personality to a breed of dog, for example, Winston Churchill = Bulldog or J.Lo = Afghan Hound, Frank Bruno = Boxer. And so, if you were a breed of dog based your personality, what breed do you think you would be?

I would be a chocolate Labrador – I’m dependable, funny, and I like doing things for other people. I also have the tendency to put weight round my middle as I get older!

Big dogs or little dogs – Any dog as long as they have a good personality, but I suppose big.

Days off or days at work – Both, as long as I get the balance right, I enjoy being at home half the week, and getting out the house the rest of the time.

Describe the last time you laughed out loud because of something you saw a dog do.

Jackson LOVES bubbles, so our favourite thing is to let Amy (my 4 year-old daughter) blow bubbles and laugh while he tries to eat them.

Alex Zane because we could talk about films all night long, Jamie Oliver because he could cook dinner and my husband Steve could talk to him forever about his recipes, and Jenny Éclair because makes me laugh and laugh.

What is your favourite...

TV show – Dancing On Ice. My friend Denise Welch is in it!

Book – Out Of The Shadows by Jason Wallace. It’s about the difficulties of growing up in Zimbabwe.

Film – Morning Glory. It’s all about working in breakfast TV, and had me crying laughing.

Finish the following sentence, my dog is... bonkers.

And finally, this is always a tough question and often requires a fair degree of thinking time but….If your dog(s) had the ability to speak and answer one question and one question only, what would you ask them and what do you think that they would say?

Easy: “Why do you keep eating my shoes?”