It's probably one of the most iconic and enduring advertising campaigns in history. We all know what we're being sold when an adorable Labrador pup comes tumbling across our screens.

But you've probably realized that the latest run of adverts are somewhat different. For the first time since the campaign's birth in 1972, Andrex have opted not to use a real-life pup in their adverts. Despite holding open auditions at Pineapple Dance studios to find the latest star, the advert makers have opted to go digital, using CGI technology to animate the pups.

The digital adverts were in pre-production before the high profile auditions took place, suggesting that this was always the plan - so were the latest round of auditions a publicity stunt in themselves?

I'm running the risk of sounding overly nostalgic, that I'm so attached to the original adverts that I won't give the new ones a chance. But that isn't the case. To be honest, I never really cared for the Andrex adverts, especially when they started giving the dogs' voices. But the new, digital adverts are creepy and in my opinion, they're dangerous.

Every Andrex advert to date, regardless of voice-overs and elaborate production techniques has had a constant theme. The new adverts, that see the digital pup using a computer, ironing a shirt and catching a plane have abandoned that very essential theme. That theme? 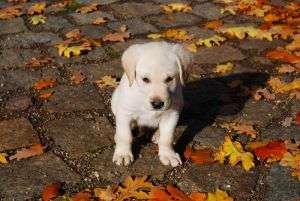 Dogs being dogs, for better or worse. I could tolerate the original adverts because in them, the dogs were doing what dogs do. But now, for reasons unknown, they've got the dogs acting like people. To some people, this will be deemed as 'cute' or 'clever'. But to me, it's risky ground.

There have been lots of adverts where dogs perform human or even super-human feats. The Walls Sausages advert is one that springs to mind immediately. It received a raft of complaints, but those complaining were daft. The advert never attempted to present the talking dog as anything other than fantasy.

These new Andrex adverts have a legacy of almost 40 years worth of branding behind them, during which time we've been sold the idea that Andrex' brand values can be represented by a cute and very real Labrador puppy. We've built the association of comfort and innocence because of those dogs. Now the goalposts have been moved.

I can't claim that the adverts are misleading, because anyone with a half a brain cell can see that they are animated. However, these adverts are aimed at children as much as they are aimed at the person whose job it is to purchase toilet paper. That's why there have been frequent tie in campaigns along the years involving Andrex puppy toys. Those were for the kids. So while the old ads may have been unrealistic, the new adverts tread dangerous ground. Sure, nobody - not even a kid, expects a dog to really be able to iron a shirt. But do they know that the dog's legs are not supposed to bend inwards?

If you watch the advert you'll see that amongst other physically impossible actions, the dog uses his front paws like hands. Now, if I trusted the general public enough to understand that this is mere whimsy, I'd be fine with it. Yet the world we live in contains people who purchase dogs because they saw them in a film - so I think you can forgive me for registering a little concern.

How long do you think it will be until a young dog owner, not knowing any better, tries to make his or dog act like the new Andrex pup? I accept that these kids won't want their dogs to do the ironing, but they may well believe that there is something wrong with their dog if the paws don't turn inwards.

It's understandable that kids may misunderstand what's going on in the new campaign, but it seems that the company behind it have also misunderstood the crucial difference between reality and fantasy.

Jon White, who is the Marketing Director for Kimberly Clark Europe, manufacturer of Andrex, said: "The Puppy’s had a huge and loyal following since the first ad hit our screens in 1972.

We really believe we’ve given him a new lease of life and have evolved his character. We’re confident you’ll love him and his new Puppy World and will be reminded about why you fell in love with him in the first place."

So even John has been dazzled and deluded by the new adverts. Walking like a person, driving a cab and baking a cake are not what I'd describe as normal evolutions for a dog. Andrex teamed up with JWT London and Framestore to make the ads. The latter is best known for its work on the Harry Potter films, so you'd be right to expect an element of fantasy in the new ads.

It has been claimed that between them, the ad makers spent half a year studying puppies to monitor their movements, characteristics and personality traits. What on Earth were they watching? Give me ten years and I guarantee I won't find a single dog that can push a suitcase along or use a laptop.

Andrex has cashed in on the good will generated by dogs for generations. How else could they have sold so much toilet roll? They have now departed from using the loveable traits of a puppy to shift their toilet paper and have instead taken the dog and made it a caricature of its former self. The pups are no longer chasing that long, soft and strong roll of toilet tissue.

They're walking on their hind legs, pulling funny faces and throwing a Frisbee. It either speaks volumes about me, or about the the stories I read on a daily basis concerning irresponsible dog owners, that I'm convinced that within a few months these adverts are going to have a detrimental effect on dogs. How long until a dog is returned to the breeder or dumped in a rescue shelter because it didn't fulfil the promise of the digital Andrex pup? How long before a vet has to treat a dog for leg injuries after an unsuspecting child has tried to make it walk or act like the dog they saw on the TV?

I'm not saying that Andrex have no right to make the dogs do these things, it's an advert after all and the dogs are clearly not real. Yet it concerns me that there is not a clear enough distinction between the dogs we knew and loved before and these new, creepy (if I'm honest) digital ones. As I've stated, Andrex is synonymous with the puppy. The cute, naughty, clumsy puppy. That's the angle they've been going for since the early Seventies.

What they've done is here is bin the positive associations and move into dangerous territory. If I was Andrex, I'd seriously consider making this my first and last foray into anthropomorphic digital dogs.