In the last issue of K9 Magazine we took a look at the history of certain dog breeds and the royalty who inspired their creation.

This time, we take a look at some of the World’s leaders and their dogs and examine exactly why so many of the leaders, not just presidents and prime ministers, but business leaders, trend setters and high profile figures rely on their dog.

Most people have a dog because the dog, as a companion offers much that humans value. We get unconditional love, loyalty, trust, friendship and many more valuable things that only a dog can offer us. Some maybe had a dog when growing up and went on to see life without a dog as not a lot of fun. Perhaps others grew up always wanting a dog and as soon as they left home got one, whilst others might turn to a dog when they think that their life is missing something.

All of these leaders and influencers do have a common reason for wanting, perhaps needing a dog, and that is simply that dogs have a unique understanding of the human condition.

After examining the facts, it's clear that the world’s leaders have exactly the same reasons for wanting dogs as those of us in mundane, low pressure, low profile jobs, only their need for that companionship that all dog owners benefit from is more acute. The role of a leader, whether they are the head of a large company, lead singer in a pop band or in charge of a country, is an isolated and lonely one at times, making the need for a dog all the more keen.

The trouble these people will go to include a dog in their hectic globe trotting life suggests that there is a need so acute that until it is realised they are somehow incomplete.

Humphrey Bogart named by the American Film Institute as the Greatest Male Star of all time, probably epitomised the sentiments of all dog owners, in his own distinct way, when neighbours complained about his dog’s barking.

“What son of a bitch doesn’t like dogs? What sort of monster is he? He ought to be glad to hear the sound of dogs barking.”

One time owner of five dogs, he had a largely unhappy marriage to his third wife Maya Methot, and when going through the divorce Humphrey was said to have fought tooth and nail to keep all the dogs with him, in spite of his busy lifestyle. He succeeded and went on to marry Lauren Bacall, with whom he acquired another two dogs. Throughout his professional life, Bogart had dogs, as his wives came and went, his dogs were always present. 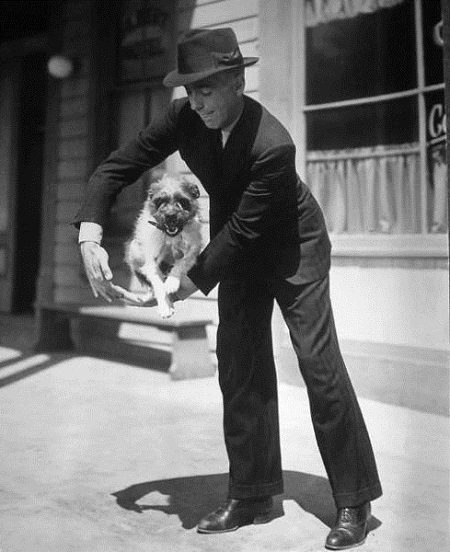 Humphrey Bogart pictured with Zero, on the set of 'High Sierra'

Elvis Presley led a generation to rebel and cut loose during a time where his nation was at war and his homeland was peppered with civil unrest. Dogs played a huge part of Presley’s often troubled, high profile life, singing about them, performing with them and confiding in them. Elvis never had a dog as a child, and had always wanted one. Upon finally getting a small mongrel named Sweat Pea, Elvis was a bona fide dog lover. He went on to get Great Danes, Poodles and in his final, uneasy years Elvis had a Chow, who accompanied him everywhere, even on stage.

Doris Day, one of the biggest box office draws of the 1950's. The renowned actress and singer has a legendary Hollywood "girl next door" image but is loved today for her role as an influential animal activist, as much as for her starring roles on the silver screen.

In 1956 while filming Hitchcock's "The Man Who Knew Too Much" in Morocco with animal lover Jimmy Stewart, she surprised everyone and said she wouldn't work unless the emaciated animals on or near the set received proper care. Responding to Doris's concerns, the production company promptly set up a feeding station and only once she was happy with it, did she return to work to complete filming. 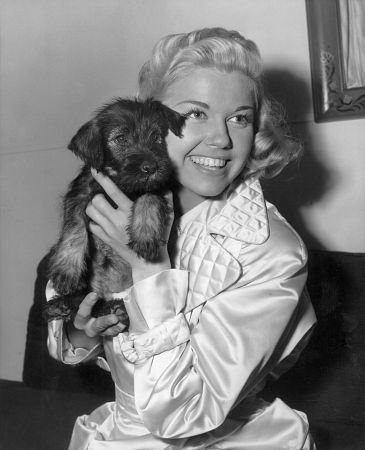 Doris Day pictured with Mrs Mike, given as a gift to actress and animal advocate by film director Michael Curtiz

Doris was one of the founders of Actors and Others for Animals, which still today is a leader in the protection of animals in Hollywood and in the late 1970's she set up the Doris Day Pet Foundation to concentrate her attention on the matter that meant the most to her - finding homes for animals being destroyed because they had no home to call their own. Later, to compliment the foundation she founed the Doris Day Animal League, a national non-profit citizen's lobbying organisation.

Read and listen to Doris' regular column online on the foundation website: http://www.dorisdayanimalfoundation.org/news/founders-corner

Vladmimir Putin has become known for his love of dogs as much as his role in political change in Russia. His black Labrador, Koni (also known as Connie) was given to the President as a gift in 2000 by General of the Army Sergey Shoygu.

Koni is often seen at Putin's side, including staff meetings and world congress events. She's been described as the only being in Russia who can bark at Vladimir Putin and is cause of the infamous statement released by the President saying,"Sometimes, Koni leaves a room full of journalists with a very pleased expression on her face and biscuit crumbs around her mouth...Please don't feed my dog." 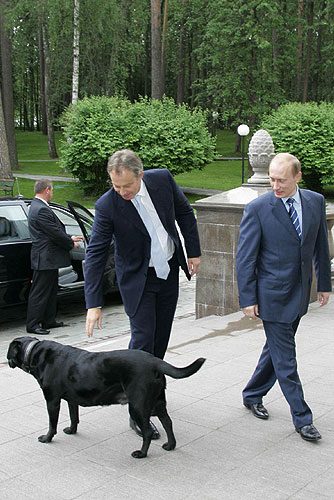 Vladimir Putin's dog pictured, greeting Tony Blair who was arriving at the President of Russia's residence

“If you want a friend in Washington, get a dog.”- Harry Truman, 33rd President of the United States of America.

JFK was allergic to dogs, but it didn’t stop him keeping them as pets. When he wanted to be alone with his wife to talk privately, he would simply ask her to accompany him as he walked his two German Shepherds, Charlie and Clipper. The things those dogs must have been privy to.

Most recently the US President chose his canine companion in part due to his daughter's allergies and need for a breed with hypoallergenic benefits. President Obama's first dog Bo, a Portugese Water Dog was joined by a second of the same breed named Sunny in 2013. 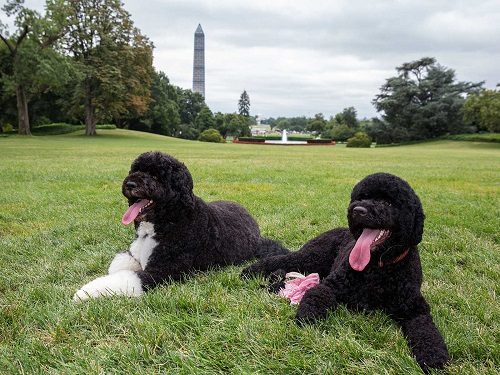 Bo and Sunny, pictured at the White House in Washington

In British history, nobody could begin their meal until Rufus, the Poodle companion of Winston Churchill had been served. Famed among his peers for his calming effect on all animals, Winston apparently saw Rufus more as a confidante than a pet. Not shy of conducting one sided conversations with Rufus, even in front of members of parliament, he famously covered the dogs eyes as they were watching a scene in a film where a dog died. Churchill whispered to Rufus, “Don’t look now dear, I’ll tell you about it afterwards.” 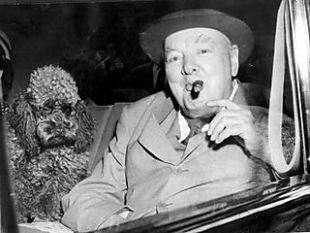 During the German occupation of Paris in WWII, a relaxing stroll without purpose was viewed with suspicion. But for Pablo Picasso, a walk along the Seine was justified by the presence his first dog, an Afghan Hound called Kazbek. Picasso and Kazbek sat through the war together, he told friends he needed to take in the beauty of the city and owed a debt of gratitude to Kazbek for allowing him to do so. He owned many more dogs after Kazbek, including an incontinent Dalmatian that appeared in some of his later works.

When the Monica Lewinsky scandal broke across the USA, Bill Clinton’s wife Hillary commented “the only member of the Clinton family to keep the president company was Buddy”, their chocolate Labrador. Buddy was by Clinton’s side as he bombed Iraq, defended his infidelity and there when he stepped down as President. On his death his owner described him as a “loyal companion who brought much joy.”

“Affection without ambivalence” is what the ‘father of psychoanalysis’ Sigmund Freud said he got from his loyal Chow, Jo Fi. Freud valued his Chow’s ‘one man dog’ attitude and his unfailing loyalty. Jo Fi became synonymous with Freud and even used to sit in on his therapy sessions as Freud believed his dog had the ability to calm the distressed patients.

Former President Franklin D Roosevelt, upon joining with the allied forces after the Japanese attack on Pearl Harbour, was so concerned for the safety of his Scottish Terrier Fala, that he had a horoscope drawn up for his dog by a local astrologer. In 1941, this was not a normal thing for an American President to be doing. There is now a statue of Fala, who outlived his master, at the FDR memorial in Washington. 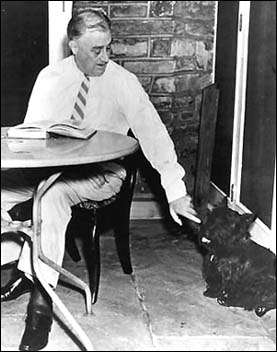 Cultural leaders often take inspiration from their dogs, so did legendary designer Yves Saint Laurent. Verging on being obsessed with French Bulldogs, the Frenchman saw his association with the dogs immortalised by Andy Warhol’s series of portraits. The designer took his dogs every where and upset models when the pets drooled, not on Saint Lauren’s pieces, but the models own clothes. 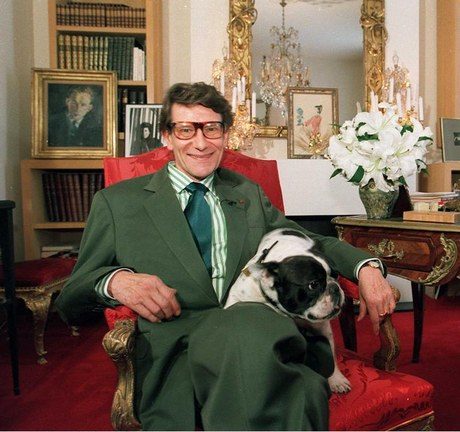 Another cultural and business leader to see his dog immortalised in pop culture was Richard Branson. At one point Branson was synonymous with his late Irish Wolfhound, called Bootleg. Bootleg lived at The Manor, where artist signed to Branson’s Virgin Records would live and record. After complaints from neighbours about the late night Black Sabbath recording sessions, the band seemed to think that it wasn’t their music that was disturbing the neighbours, but the dog barking in response to the heavy metal bands loud riffage. In spite of blaming the dog for getting them in trouble, the band named a song in Bootleg’s honour. It was called ‘Digital Bitch’.

Regardless of popularity, success or profile, this selection of leaders and their dogs shows just how much a dog can be relied on by those in the public eye. Behind the next news story we see may be an untold tale of a dog sitting defiantly by the side of an unpopular, lambasted or hunted man, and that is why leaders need their dogs.

Who is your favourite icon and their canine? Let us know!