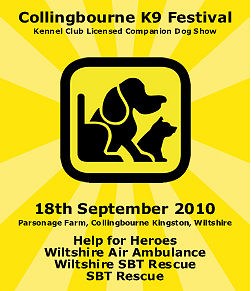 The Collingbourne K9 Festival is the Biggest Little Dog Show in Wiltshire! A Companion Dog Show, with 18 Classes under KC Licence 12929.
The Show will take place at Parsonage Farm, Mill Drove Collingbourne Kingston on Saturday 18 September 2010, and introduces two wonderful new trophies: "The Collingbourne K9 Perpetual Trophy" for the winner of 'Best in Show' and "The Marney Wells Perpetual Obedience Trophy" for the overall winner of the Obedience Classes. The winners of both these trophies will also receive a Canine Hamper and a £100.00 cash prize.

Doors open at 08:30 a.m. for dog show registrations and the Grand Opening will be at 10 a.m by our special guest Mr Pip Pocock, of the Veterinary Hospital, Hungerford and Miss Claire Lingard the Show 'Chairman'.

At 1 p.m prompt there is a Guinness World Record Attempt at the record for the "Largest Simultaneous Dog Stay" in the main arena. under Guinness World Records™ reference 303386. This record is for the greatest number of dogs who 'stay' successfully at a single venue.
The current record as at today's date is: The largest simultaneous dog stay involved 627 dogs at an event called "Super Sit" organised by the RSPCA at the Wag and Bone Show, Windsor Great Park (UK) on the 6 August 2005.
We think this record should come to Wiltshire and hope you will join us in helping to bring it home!
The Collingbourne K9 Festival, which will become an annual event, will provide a wonderful family day out for dog lovers and raise much needed funds for our four supported charities. There are fantastic displays attractions throughout the day and a Shopping Village. There will be excellent outdoor catering facilities, a Hog Roast and Licensed Bar also a Childrens area which includes Bouncy Castle, Laser Quest and Mega Slide

For more information and details how to enter the dog show go to www.ckk9.co.uk

Collingbourne K9 Festival 2010 is in aid of the following charities