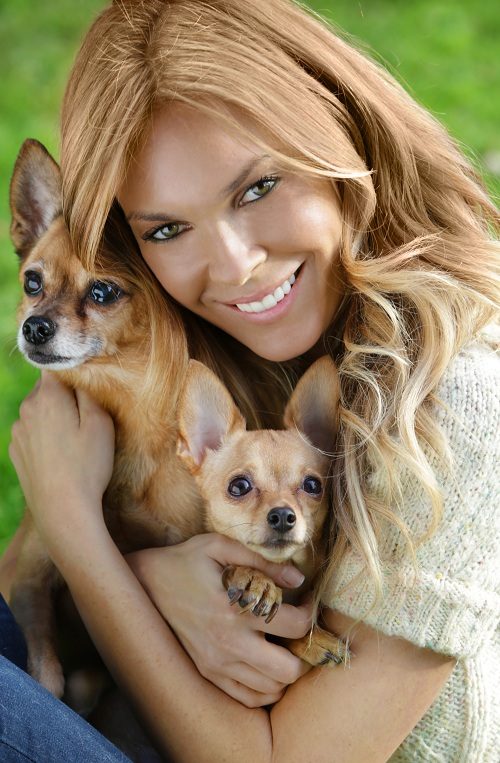 Jasmine Dustin is a US actress and model who has been featured in GQ, Esquire, Maxim and Cosmo to name a few. She has featured in campaigns for Fredricks Of Hollywood, Lamborghini, Johnny Walker, William Rast and Duwop Cosmetics and may be recognized for her roles in popular TV shows such as CSI Miami , Deal or No Deal and Knight Rider. Look out for her alongside Christian Bale and Natalie Portman this year in Knight of Cups.

Kim O’Meara caught up with Jasmine to find out about her dogs and what's next for her animal charity, Models n' Mutts.

I have 4 rescue Chihuahua mixes ranging from 1-12 years old! My oldest Yogi is going on 12. He’s a Chihuahua/Pomeranian mix. I’ve had him since moving to LA. He’s the cranky one around the house. He was used to being the only spoiled baby that ran the household - now he has 3 brothers and sister that came along many years later, he doesn’t like that. He’s the watch dog of the neighbourhood. He sits on the back of the couch all day long and watches the neighbourhood.

Stinker is 2 ½ years old and he’s a Jack Russell/Chihuahua mix who was rescued hours before getting euthanized at the Downey shelter. His name is Stinker because he’s just that - a STINKER! He’s so bad, and that why I just love him so much. He goes around the house and steals every one of the bones from the other dogs and fits them all in his mouth. You’ll see him with 5 bones in his mouth at a time.

Peanut is 3 years old and a teacup Chihuahua. Her owner died of cancer and she was brought to the shelter. I was planning on fostering her, but we all know how that goes. Of course my husband and I fell in love. It’s a running joke that she’s my husband's girlfriend. She flirts with him all day long, its so sweet. She’s definitely the most spoiled of them all. She will bark and bark and bark until you pick her up to be on your lap. She’s the definition of a lap dog.

Minnie, well, she's my newest baby. Minnie is for Skinny Minnie. She is just a year old and is a deer Chihuahua. She looks like a baby Bambi. Her legs are almost as long and skinny as mine. I’ve never seen a Chihuahua like her. She was going to be killed at the Orange County shelter so I offered to go pick her up and foster her for a few days until the transport was arranged to her permanent home in Northern California. Well after day one she was attached at the hip. I couldn’t move without her following me.

She would cry if I left her for even a second. So needless to say she never made her flight to Northern California. She went from being very shy and timid to the household bully. She comes with me to my photo shoots from time to time and all the photographers just fall in love with her because of her long supermodel legs.

I’ve always had and loved animals but my true passion for helping them started about 6 years ago. I had a roommate who was a huge animal lover. She was a huge advocate for animals of all kind. She called me on the phone after she had moved out and asked me to please go on Facebook and look at this precious small Chihuahua that was about to be euthanized. She asked if I would please think about fostering it. So I went online and of course fell in love with the picture, so I left a message on the picture thread saying I’d foster the dog.

I got no response. So I went on and emailed the shelter in which the dog was located at. Again I got no response. I spent the next 2 days trying to message everyone that had posted this dog asking for a foster. No response, nothing. I woke up Sunday morning and of course checked my Facebook and there was this dogs eyes staring back at me from the screen with the caption ”KILLED”. I was honestly beside myself.

I sat for hours and hours and just cried. I just couldn’t believe what I was reading. So, from that point on I knew I had to do something for these poor helpless animals being put to sleep at shelters.

Your career has been so varied to date from your modeling and acting, as well as DJ'ing. What, or perhaps who, inspired you to follow the career path you chose?

At a very young age I knew I wanted to be in front of the camera. I started doing beauty pageants at the age of 6 and always won Miss Congeniality (Best in Pictures). After years of pageants, I started doing local photo shoots in and around the Boston area. I knew that when I turned 18 I was going to go and pursue my dream of becoming a full time model, and that’s what I did.

I packed up 3 suitcases and hoped on a plane with my high school sweetheart and headed to Los Angeles where we knew nobody!

Within a very short time I had booked the campaign for Fredrick’s of Hollywood with a billboard on Hollywood Boulevard. After that I knew I wasn’t going anywhere. Los Angeles was now going to be my home. I traveled far and wide to different countries for modeling. It wasn’t until I booked the hit NBC show Deal or No Deal that I realised that I love being on a TV set.

After my season on Deal or No Deal that's when I began pursuing acting as well as my modeling. Everything seemed to fall into place. I was blessed to work with some incredible actors my first couple years acting in television and film.

It wasn’t until 2011 that a manager from New York contacted me and asked if I’d be interested in training to be a celebrity DJ. This company was based in New York and only represented well known fashion models. They were opening a new branch of model DJ’s here in LA, so I signed on. I trained for 6 months with them and then began to do gigs allover for some of the top night clubs.

I've always said I never wanted to be just a model or just an actress…I wanted to be a personality, and that’s why I enjoy doing a little bit of everything.

Where would you like to see yourself in 5 or 10 years time?

In 5 years I still see myself being here in Los Angeles doing what I love most - being on set. In 10 years time though, I plan to be in Florida closer to my family living on a ranch with lots of land for my own animal rescue.

Using your modeling fame, you co-founded Models n' Mutts. Tell us a little about your animal rescue and plans for the future.

I started Models n' Mutts last year with my partner, Gina Hendrix. Models n' Mutts is an organization of well-known models who all have the same passion and love for helping animals in need. The models use their fame to bring awareness on how important it is to adopt animals from local shelters. Money donated and raised through charity events goes to rescuing dogs in high kill shelters, transportation of animals to other states for adoption, food for local shelters and medical costs of special needs animals.

We held our launch party last November which benefited the animals of Hurricane Sandy. We also donated money to different rescues who had special needs dogs fighting for their lives.

We plan on doing 3-4 large events throughout the year to raise money for different animal rescue and organizations. Along with the larger events we also do food drives for local rescues and dog adoptions.

There are over 100,000 dogs in UK rescues waiting for new homes. What would you say to anyone thinking about getting a new dog to encourage them to consider adopting a dog?

I think its so important for people to bring awareness to this issue. Most people are not aware of all the animals that are being euthanized in the shelters. People should not be allowed to buy dogs from pet stores, animals should always be adopted form your local shelter or rescue.

Dogs that come out of the shelters tend to be the most loving animals you’ll ever come across. They’re just dying for someone to give them love and attention. My goal this year is to bring more awareness to this issue. Unfortunately with most people its out of sight out of mind...I really want to change that.

Jasmine Was Speaking With Kim O'Meara

“Gross! Why’s he rolling around in the mud like that?” “I don’t know son, maybe he thinks he’s bathing.” Interestingly, wolves and other wild...

If you’re one of the lucky few K9 Magazine readers who’ve recently acquired or are thinking of getting a new puppy, congratulations! You’ve done...

The Importance Of Teaching Your Dog Social Skills

With dogs playing a bigger part in our lives than ever, here at K9 Magazine we know you would like to discover much more...

Is Anthropomorphism To Blame For A Nation Of Naughty Dogs?

We’re all guilty of it - but most of us don’t even know what it is! There’s little doubt that dog owners today are...