Bill Horn & Scout Masterson (aka “The Guncles” – Liam & Stella’s “Gay Uncles”) are regulars on Oxygen Network’s hit reality show Tori & Dean Home Sweet Hollywood. Friends with Tori and Dean for many years, Bill and Scout have been seen by millions spending quality time with the famous couple and their two adorable children, Liam and Stella. An emotional rollercoaster, the show followed them going through the process of adopting a child.

During the sixth season, fans had the opportunity to share the joys of The Guncles finally becoming dad’s to Simone Lynn and a few of their joyous milestones during the first year of Simone Lynn’s life. Based on their experiences, The Guncles launched www.gunclesonline.com – a site that mixes news about the new family with everything from recipes to hot new baby products.

K9 Magazine caught up with Bill and Scout to find out about their three rescued Chihuahuas – Stanley, Jessica and Harvey, their views on adopting and what they think the best thing about being a dog owner is.

Our dogs - Jessica, Stanley and Harvey are more like “fur children” to us. We adopted all three of them from rescue organizations (we don’t believe in buying dogs!) They sleep in our bed at night and Jessica even sleeps on the pillow in between us... like a person. It’s hilarious! They definitely have their own distinct personalities. Jessica is the oldest and the matriarch of our family - She’s our Caroline Manzo. Ha! She watches over the two boys and makes sure she remains in charge. Jessica is also known for cleaning everyone's eyes - she even tries to do ours. Sometimes we just let her. We figure it’s her motherly instinct.

Stanley is the goofy one and is always super happy. He gets super excited when it’s time for a meal and doesn’t ever turn away food, no matter what it is. And Harvey is our baby. He’s about 2 1/2 years old now (by the adoption information). We also call him “Simone’s dog” because he’s really attached to her and is always licking her and following her around the house.

We’ve both always liked dogs and grew up around them. If we had a larger home we’d consider adopting a 4th.

What do you think is the best thing about adopting a dog and if you could give someone one reason to adopt a dog (we have over 100,000 dogs in rescues across the UK) what would you say?

We’re 100,000% in favor of adopting dogs. Matter of fact, we’ve not spoken to a friend who bought a dog once... There are so many dogs that need families and homes. It breaks our hearts to know that our Jessica, Stan or Harvey may not be alive today had we not adopted them. We can’t even think about it.

We’ve had some people say that they want a certain breed of dog and that’s why they want to buy. We’ll, guess what... those dogs are also in rescue shelters. You just have to look! By looking on the web, you can find any breed of dog somewhere in a rescue shelter. Some rescues are even breed specific (for example Chihuahua rescue, Pug rescue, etc.). 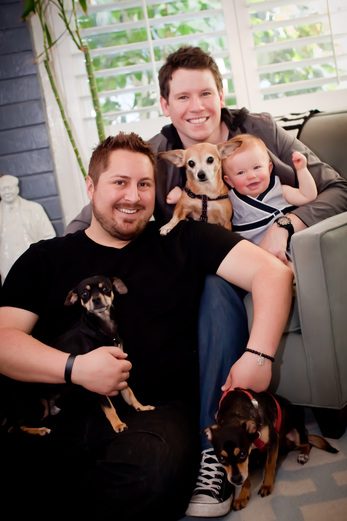 From left to right – Harvey, Jessica and Stanley Masterson-Horn

Being best friends with Tori Spelling and her husband Dean, in fact she gave you the name 'The Guncles' didn't she, you're currently appearing in their reality show, Tori & Dean: Home Sweet Hollywood. How has reality TV changed your life from walking down the street to opening new doors?

Yes, Tori did coin us “The Guncles” and it really just took off. So now, that’s how we’re known. The 6th season is currently airing (Tuesdays at 10PM on Oxygen) and we are officially the first gay family with a child to regularly appear on a reality TV show. Which is a pretty cool honor! It’s interesting. Almost 100% of our “fans” are women. The gays don’t know us. Ha! When we walk through Target we get stopped a lot. It’s always so fun to meet the show fans and also their families. Especially since we share our family with them!

You've recently launched your new ‘Hold My Hand’ adoption mentoring service helping other parents looking to adopt. Tell us a little about that.

Although we’ve been helping people with their adoption questions for quite a few months, during November’s “Adoption Month” we decided to officially launch our adoption mentoring service, Hold My Hand (more info at GunclesOnline.com). When we were going through our own adoption process, we wished there was another person we could talk to who had been through the things we were feeling and dealing with. Our family, friends and adoption agency were very supportive, but sometimes we just wished we had another place to discuss stuff away from our situation. So that’s what we do.

We offer our advice on everything from how to start the adoption process to setting up the nursery! As it’s set up now, we don’t have an official office yet or charge for the service, since we’re doing it in our spare time. But someday soon we hope to devote a lot more of our time to helping others through the Hold My Hand service.

Do you have a motto that you live your life by? What would you say Jessica, Stanley and Harvey's motto might be?

We live life to the fullest and we don’t sweat the small stuff. We must believe everything happens for a reason. Jessica would say “stay in bed as long as you can each day”, Stanley would say “don’t worry about what you eat - live and love life!” and Harvey would say “love one, love all”.

If you were to swap roles with either Jessica, Stanley and Harvey for a day, how do you think they'd cope being you and what would you most love about being them?

We think Jessica would be fantastic working in our office and dealing with clients. She has a very matter of fact personality and seems super efficient. As for us being Stanley and Harvey - Well, it would be nice just to lift our legs and pee wherever!

Big dogs or little dogs – Little dogs. Easier to cuddle in bed with. Pedigree dogs or cross-breeds – cross-breeds because of their unique-ness Days off or days at work – Days off with our family - of course!

Describe the last time you laughed outloud because of something you saw Jessica, Stanley and Harvey, or another dog do.

The day we adopted Harvey, we took him for a little walk around the strip mall where the rescue organization was set up that day. On the walk he stopped at a trash can (the metal kind they use at outdoor malls). He leaned up against it, stood on his FRONT LEGS and started to poop. At that moment, we KNEW he was meant to be a part of our family!

What is your current favorite...?

Book - Glitz, Glamour & Style by Jacquie Bennett (Scout’s Mom - It was her life dream to write and publish a book and she accomplished that this past summer. So proud!)

We feel like the dogs make our house a home. They’re an important part of our lives.

Finish the following sentence, my dogs are... sometimes crazy, but always lovable!

And finally, this is always a tough question and often requires a fair degree of thinking time but....If Jessica, Stanley and Harvey had the ability to speak and answer one question and one question only, what would you ask them and what do you think that they would say?

We think we treat them pretty well with the meals we feed them. Sometimes we’ll bake a chicken for them or make a special dish. So that one question would be - “What do you think of our cooking?”
And we think they'd say - “Pretty good. But nothing beats a McDonald’s cheeseburger!!”

Many Thanks The Guncles!

Bill and Scout Were Speaking With Kim O'Meara