There are many myths about dogs who have been abandoned and are in need of a second chance. Equally, you may have formed opinions of those who are serving life sentences in prison. What happens when you marry the two is karma in effect.

California is home to many things. Sun, sand, sea and Arnold Schwarzenegger to name but a few.

It's also home to California State Prison in LA County, which is a maximum-security facility and was the first institution in the state to allow inmates serving lifetime sentences to train rescue dogs. 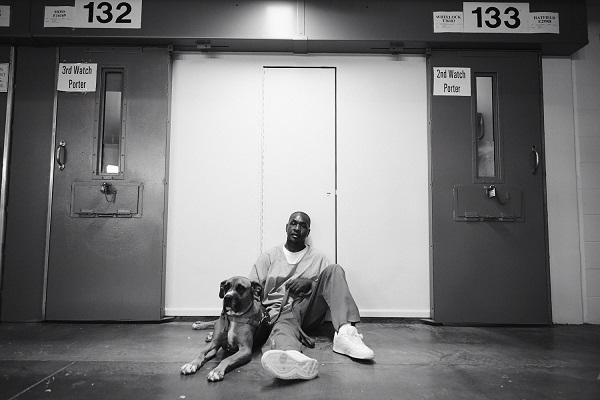 Paws for Life is a program developed by Karma Rescue, a non-profit organisation based in LA who rescue at-risk dogs from high-kill shelters across Southern California.

The rescue first launched the program in 2014 with the help of Captain Wood at the Lancaster State Prison. In that period together they have run seven rounds of the 12-week program with over 60 dogs certified as Good Citizens and 30 inmates now taking part in both training dogs and mentoring other inmates. 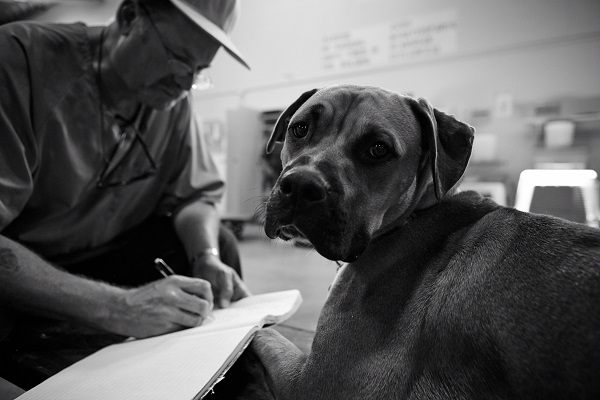 Captain Wood, an avid animal lover, took us back to the beginning of the journey and June 2014 telling us why she approached the rescue with the idea, 'I have always been an avid lover of animal especially dogs. Over the years I had seen where Prisons in other states were running dog programs. I had told myself years ago if I ever have the opportunity to start a dog program I am going to because so many animals could be saved and the men could give back to the community.' 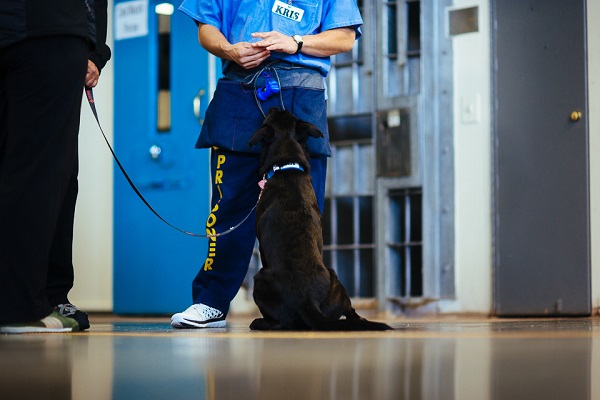 She continued, 'When I arrived at CSP-LAC (California State Prison, Los Angeles County) I was assigned to Facility A where the inmate population was very different in that there was very little violence on the facility and the men worked together regardless of race. I knew this would be the perfect place to start a dog program. The men were willing to work so hard to get it started and knew the sacrifice’s that it would take to have a successful program. I spoke the Warden at the time, Mr. J. Soto, asking him if he would allow a dog program on Facility A. His response was 'sure figure it out'. So I set off researching as many other dog programs around the nation to see how they were run.' 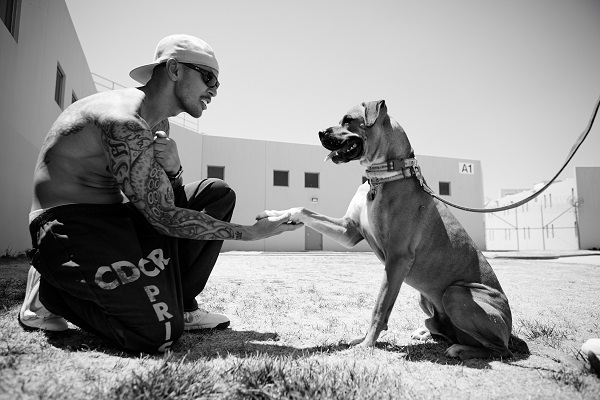 Captain Wood knew she had to find a rescue which was a good fit and could run the program at a maximum security prison.

'When Karma Rescue said that they would be the rescue to run and pay for the program, I was beyond excited. A lifelong dream of saving so many dogs was going to come true! The first meeting I had with the volunteers from Karma my heart was rising and I wanted to make sure I did everything perfect to show them how much the program meant to me.' 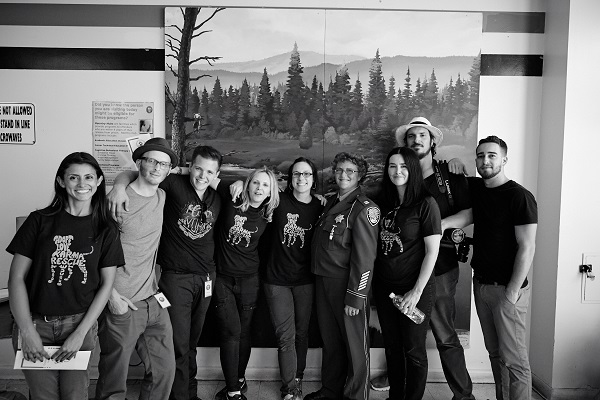 'I still get excited every time I speak to anyone about the program and what an impact it is making on so many lives. The staff at the facility who are there day in and day out love the program. They make sure that everything runs smooth and the dogs are always taken care of.' 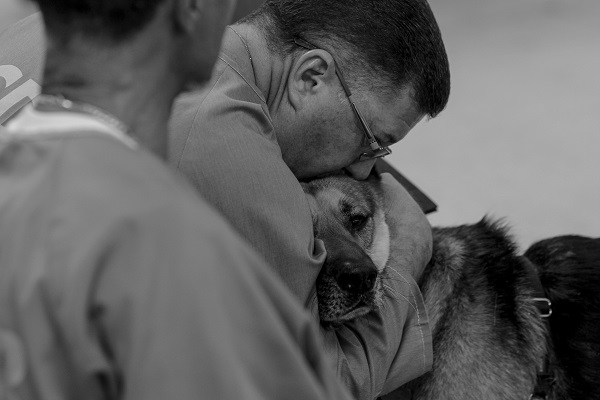 Before being accepted to the program inmates undergo a rigorous application process which includes written essays and interviews.

With over 30 inmates now participating in the program to train the dogs and mentor other inmates, Captain Wood concludes, 'the men in the program are still after two years in love with what they are doing and how they are able to give back to society and save the lives of these amazing creatures.' 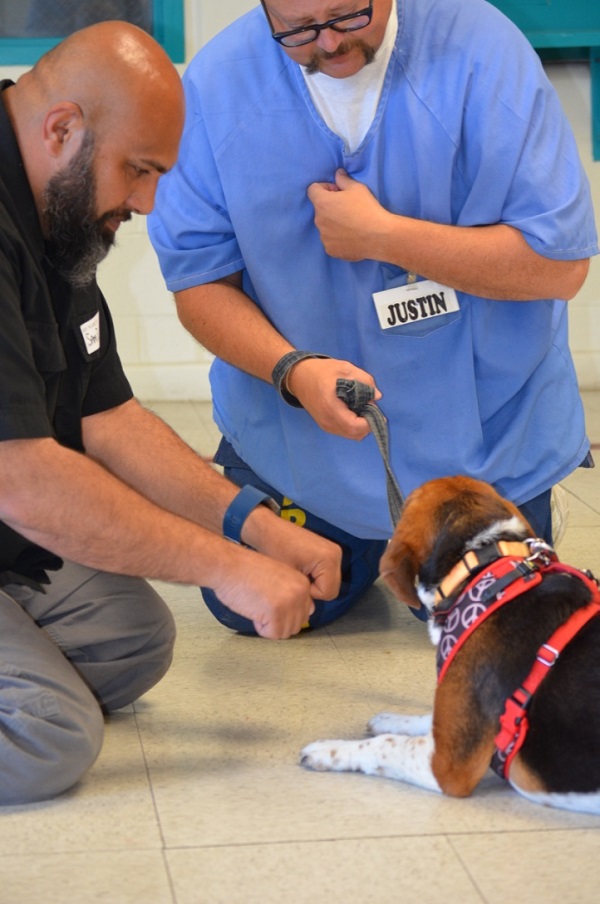 The program is having a tangible and positive impact on the future of the dogs who take part.

Alex Tonner is the Director Of Operations at Karma Rescue and Paws for Life. She became joined the rescue after adopting her Pitbull from them and has been involved in the evolution of Paws for Life since day one.

She told us as a result of the initiative there has been an increase in adoptions with more than 60 dogs becoming Canine Good Citizens (CGC) certified and successfully placed in new homes. 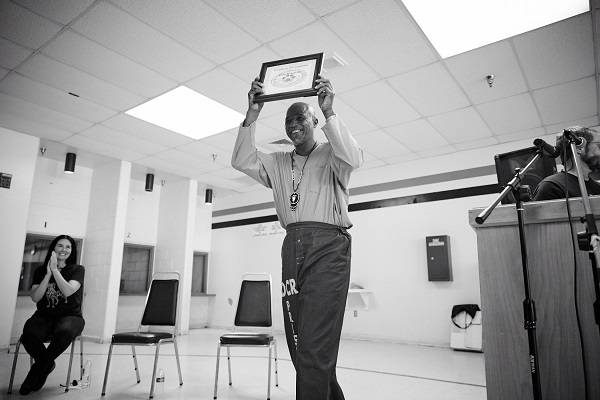 It is also saving more lives than ever before.

Karma Rescue saves at-risk dogs from high-kill local shelters. This means dogs who may not be given a future are given a second chance by the rescue, and as a result of the Paws for Life program 50 more dogs are being saved each year and given a chance at a future. 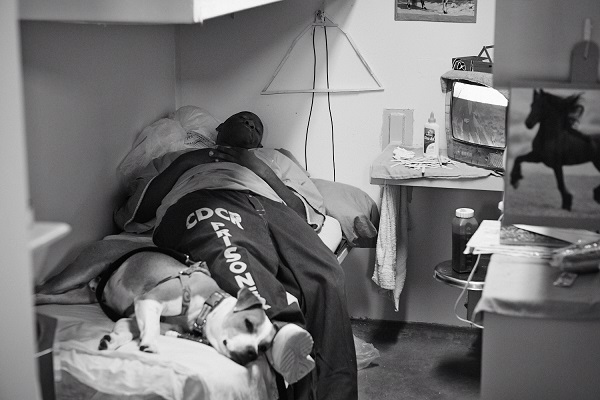 Reflecting on the program, Alex recalled one particular dog named Boris, pictured below, who took part in round 2 of the program which had a lasting impact on her. 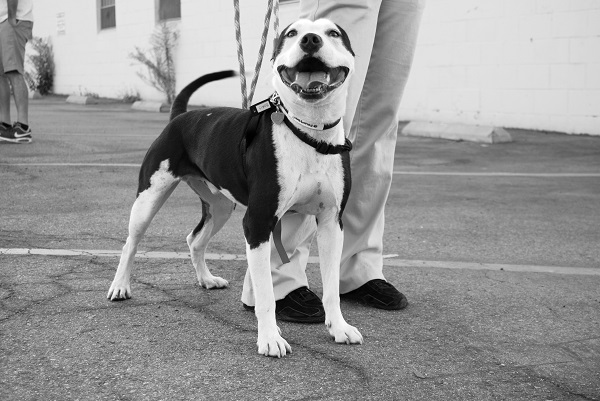 'Boris was red listed at South LA Shelter as he had been there for over 5 months and was a little rambunctious, but amazingly dog social. I visited with this rambunctious boy every time I was there; often using him to test other dogs in the play yard. Once we got the green light on the program, Boris was in no doubt one of our top choices to participate in the program.' 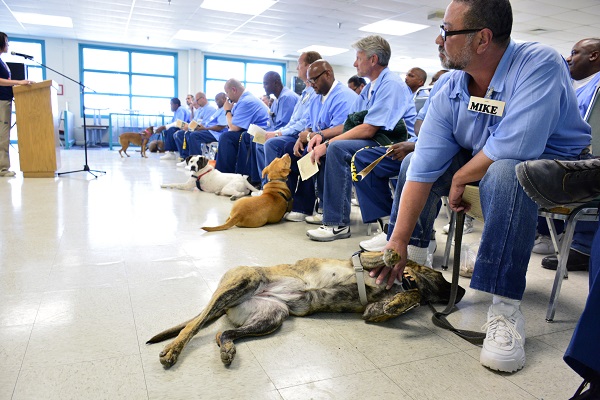 She continued, 'During the second round, the program was visited by a veterans group - the person who was assisting was Sergeant Major Jesse Acosta who was blinded in action and needed the assistance of a person as well as his own dog. The person that was assisting Sergeant Major Acosta that day fell in love with Boris and ended up adopting him once he graduated the program. She continues to write updates to the guys and support the program.' 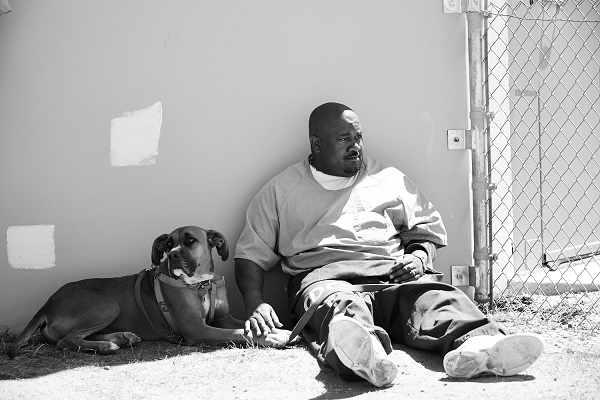 But Paws for Life initiative also aims to teach new skills to the inmates involved and has brought about a new future for one of its participants as Alex told us.

She said 'we had an inmate who was paroled after 27 years who had been a part of the Paws for Life program. Not only does this person work for Karma Rescue, he is also about to enrol in a 10-month long program to further his dog training skills and get his dog training certification.' 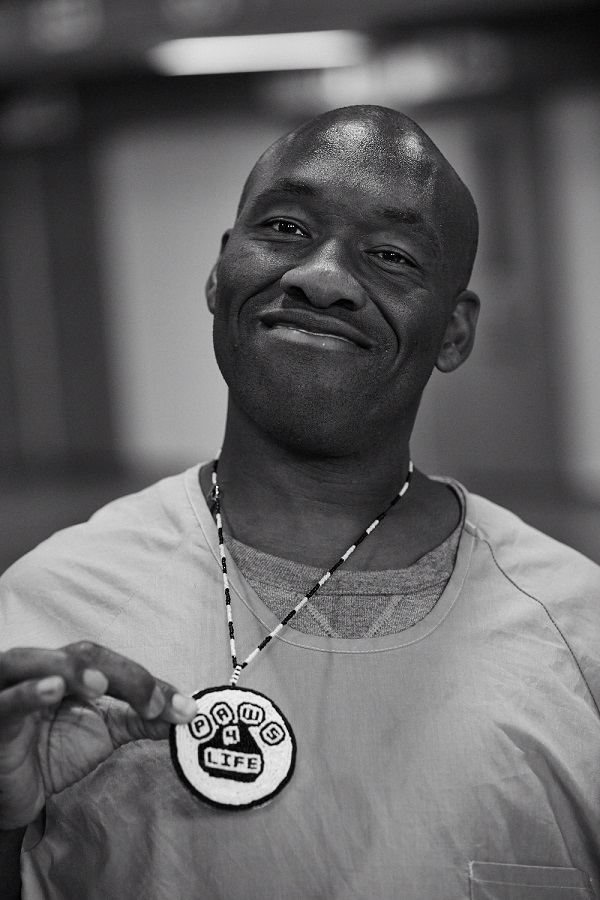 Part of the scheme's success has to be down to the support from the 'powers that be', who were, by and large, all for the program as Captain Wood explained earlier. Those who needed a little convincing soon came around as the first round of the program concluded, even wanting to adopt some of the dogs themselves. 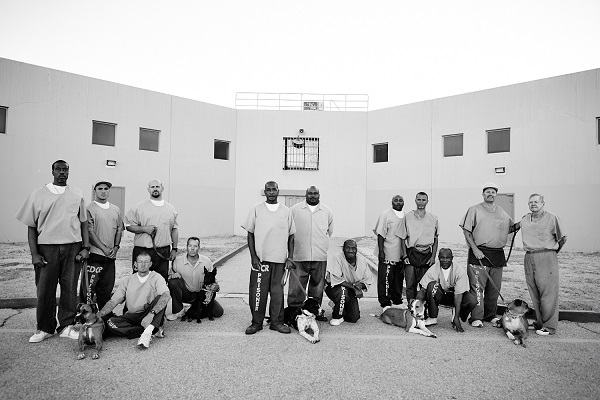 From bringing the idea to Karma Rescue to working with the inmates to give support from within, Alex told us Paws for Life is all about teamwork, even in a place as tough as a prison. 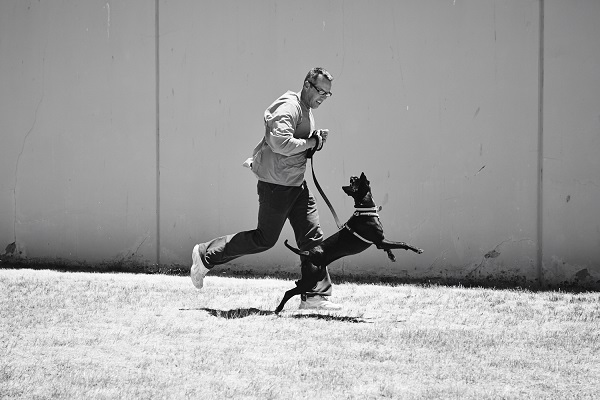 She told us all of the inmates who have been a part of the Paws for Life work have shared stories about the positive impact this program has had on them.

'It has shown them how to care about something again, how to care about another life. The dogs have made it possible for them to have love and compassion in their hearts again. They talk about how this program has given them a purpose and drive that has been gone for a long time.' 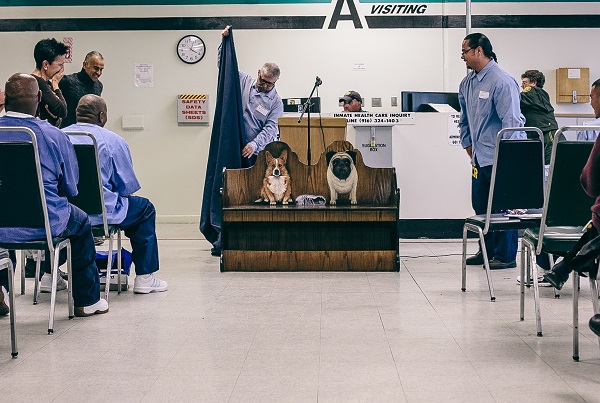 She continued, 'They relate to these dogs being left in shelters (prison) to die and know they can make a difference for them by training them and allowing these dogs to have a second chance at life.

On the effects of karma Alex concludes, 'They are helping to save lives now and that's something they never imagined they would be able to do or even want to do from prison. This program means a lot to these men. It's showed them responsibility, compassion, love, teamwork, discipline, and has ultimately allowed them to feel human again. The one conversation that has always stuck with me, was when I talked to one of the men who participate in this program, he said “these dogs don’t judge us, they see us for who we are, and that is a beautiful thing for us as inmates”.' 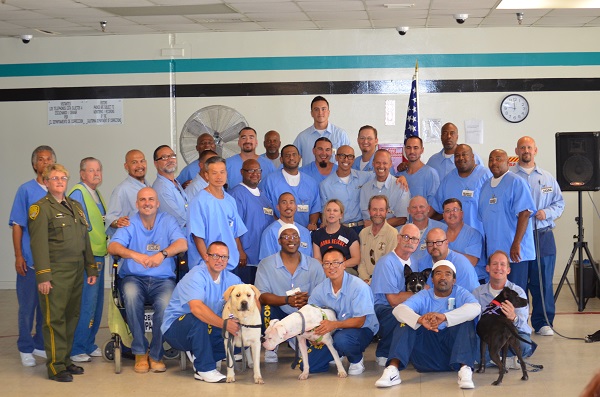 The initiative has just launched in its third California State Prison, Mule Creek Prison showing the power of karma as it continues to spread the positive message to change the future for the better for man and his best friend.

Create Karma … Save a Life.

Find out more about the Paws for Life program and the work of Karma Rescue online at www.karmarescue.org