Holly Madison is a well known American TV personality known for shows such as The Girls Next Door and Holly's World. After spending some years headlining her own show in Las Vegas, she decided 2012 was time for a new challenge and will soon launch her own pet range, Lucky Pet Products.

Kim O'Meara caught up with Holly to find out all about three of the big loves in her life, her rescue dogs.

I have three dogs, all rescues from Las Vegas. The oldest is Napoleon, then I have Josephine and Louis. They're all little yellow cross-breeds and are so cute.

I'm a big advocate of rescuing dogs. I think buying from a pet store is such a bad idea, it's unethical and the dogs are so unhealthy because of how they've been bred. I would only ever rescue because there's so many in rescues looking for new homes.

I grew up with dogs and cats, I've have had my own since I was in my twenties.

You're about to embark on a really exciting new launch with your range of Lucky Pet Products. Tell us a little about the sentiment behind their development.

I'm super excited about it! This season to launch we have some fantastic pet toys, treats, bowls and fashion, t-shirts. I love them all! I was really lucky to be hands on working with a great team to develop them. A portion of the profit will also go to Lied Animal Center (also known as The Animal Foundation) in Las Vegas.

We spent a lot of time getting the range just right, getting products that will last and are durable. I'm excited about next season range as well – we'll do more.

In fact one of the products we have is an au natural ball and my dogs took it apart so we've worked on it and made it especially for cats, so Napoleon, Josephine and Louis had a really important role. 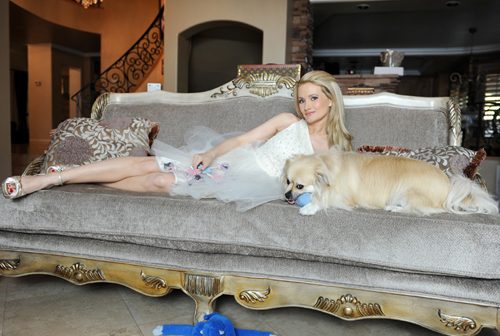 Your job must mean you travel quite a lot. Where is the most pet friendly place you've visited?

Many readers will remember you fondly from your time on E!'s The Girls Next Door show before you moved onto your own show, Holly's World. Both were popular and The Girls Next Door was a hugely pet friendly show thinking about Hef's zoo and Kendra and Bridget's own dogs. What's your favourite memory from the show?

It has to be the time I got to spend, bond and learn so much about Coco the monkey in the zoo. I feel privileged to have spent the time I did with her and build up a good rapport. I loved learning all about the animals.

I also really loved seeing the moments I wasn't there for at the time, like Bridget dressing her dog, Wednesday, up. All of those fun moments.

One thing people might remember about your time on both shows is your involvement in the business side of things, from the magazine, to co-producing the shows themselves. You seem to be someone who likes variety in what you do. Do you think that's pretty fair to say?

Definitely. I like to have new projects to work on every couple of years that take me in a new direction to learn something completely different and have lots of fun along the way.

I've spent the last few years headlining my own show in Las Vegas and two years of that filming Holly's World. This year I wanted to go in a completely new direction and learn new experiences along the way.

Do you have a motto that you live your life by? What would you say your dogs may be?

I don't really have a motto to be honest, I really like changing things up every so often.

However I think Napoleon's motto would be 'take control'. He's like the boss, he can be a bit of a bully. My old room mate used to call him the fun police. I think Josephine's would be 'boy crazy', she just loves boys. She loves my boyfriend – she's super sweet. And I think Louis' would be 'live to have fun' – he's so playful.

If you were to swap roles with one of your dogs for a day, who would you choose to swap with firstly, and how do you think they'd cope being you and what would you most love about being them?

(Laughs) I'd love to see the world as they see it! They have this amazing house in the backyard, it's air conditioned and so amazing. They're totally pampered. When I'm not there, they're checked on regularly and they have the run of the house. I sometimes think that when they're on their own they must have these wild parties inviting all the neighbourhood dogs – if I was one of them, I'd do that.

I think Napoleon would do really well as me. He'd get lots of business done, he's very smart.

For this question, we ask our celebs to match up the following people’s personality to a breed of dog, for example, Winston Churchill = Bulldog or J.Lo = Afghan Hound, Frank Bruno = Boxer etc. If the following celebrities, and your co-stars from The Girls Next Door were breeds of dogs, based on their personalities alone, what type of breed do you think they'd be...

Kendra Wilkinson – She'd be a Jack Russell Terrier because she's so active and sporty, just like them.

Bridget Marquardt – Well she owns a Pekingese, Wednesday, I don't want to say one of those, but she'd definitely be a small breed. One you could dress up and make them like you.

Big dogs or little dogs – Just for me, I prefer little dogs because I think they're easier to manage. You don't need to go on the long hikes you would with a larger dog for example, but I love all dogs.

Pedigree dogs or cross-breeds – I really love cross-breeds. I think they have so much personality! For example, I love trying to work out what mine are crossed with. We think one is a Pekingese cross Pug, another is possible a Pekingese cross Bichon maybe and we just can't work the little one out!

Days off or days at work – It's a draw! I love working, I love what I do. I also love time off and spending it with my boyfriend, taking a trip to Disney world or going out to a club, or going for a Chinese. It has to be a draw, I couldn't pick!

Describe the last time you laughed out loud because of something you saw one of your own dogs, or another dog do.

(Laughs) Well I wasn't sure the first time I saw this but I also have two ferrets and Josephine grabbed one of them by the tail once and dragged them across the floor. I panicked the first time I saw it worrying about what was going on, but the ferret kept going back for her to do it again so they seemed to love it! It's a regular thing now but makes me laugh every time. 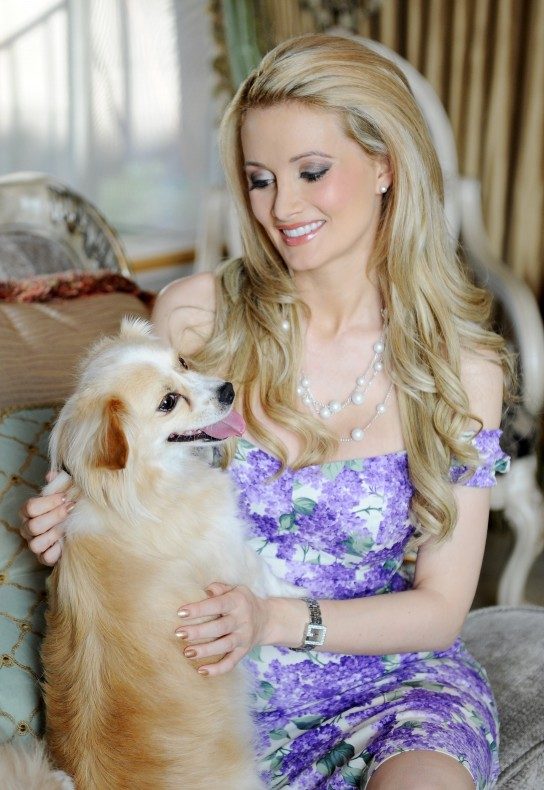 Well I'd invite people that I'm super curious about. I'd love to invite Marie Antoinette and Marilyn Monroe. I'd also invite Jesus because whether you believe the religious aspect or not, I think he'd be fascinating.

TV show – I don't really get a lot of time to watch much TV but when I do I like things like Pawn Stars on Bio or things that are fun and informative on the History channel.

Movie – My all time favourites are things like Casino with Robert De Niro, Moulin Rouge and Marie Antoinette. I really love Disney films though so I've seen Tangled and Brave.

Book – It's super hard to choose a favourite. I've read Marilyn Monroe's biography by Donald Spoto so many times. I'm also reading Tess of the d'Urbervilles, I like classics.

If you could sum it up, what do you think is the best thing about being a dog owner and appeals to millions and millions of people across the globe?

I think it's the companionship, there's a real dynamic in the bond between dogs and their owners. Cats are great, but they're more independent than dogs by nature, so I think the fact dogs are more attentive means they're as popular as they are.

Finish the following sentence, my dogs are... crazy!

Oh wow! We'll I'd ask Napoleon why he won't leave me alone at night. At night I put them in their air conditioned house to sleep. If Napoleon was inside he'd be constantly waking me up, at night he gets so hyper and I don't know why, so I'd love to ask him that but I've no idea what he'd say.

I'd ask Louis why he won't pee outside. He seems to choose to mark his territory inside rather than outside and so I'm constantly cleaning up behind him. I'd love to know why.

And, well it's not so much a question more a favour, but I'd ask Josephine to keep the boys in line.