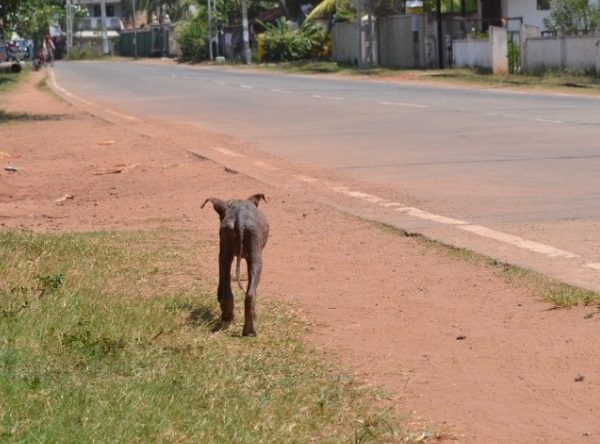 A tiny island nation in the Indian Ocean, Sri Lanka is a diverse land of endless beaches, lush jungles, and timeless ruins. Though, with a population of over 20 million people, Sri Lanka has struggled to manage both its street dog overpopulation problem and its community education programs that help prevent animal welfare abuses and the spread of animal-borne diseases such as rabies, says Natalie Kyriacou.

Sri Lanka is home to millions of roaming street dogs and cats who suffer immeasurable pain from diseases, vehicle accidents, and cruelty. Overpopulation of street dogs (and cats) has been an issue that societies have dealt with in a variety of ways, many inhumane. The welfare of the animals has rarely been considered, and as a result, campaigns of poisoning, shooting, electrocution, drowning, starvation and other cruel methods have been used to 'dispose' of unwanted animals. Such activities are not only brutal; they are ineffective because, although they may serve as methods for 'immediate' results, they are not long-term solutions.

The life of an uncared for street dog can be wretched. Entire lives spent without any positive human contact, basic shelter or veterinary care. Suffering hunger, constant torment from preventable and treatable skin conditions or parasitic infections. Dogs and cats are at constant risk of being trapped in illegal snares, injured in fights over territory, contracting sexually transmitted diseases or being exposed to fatal diseases, like rabies.

In Sri Lanka and across the globe, the most effective way to deal with the street dog overpopulation crisis is through education, sterilisation, and vaccination. But how do you change the habits and actions in a country where they are so culturally embedded?

Over the last 10 years, the Dogstar Foundation has focused on transforming animal welfare in Sri Lanka working closely with its communities and vets to provide sterilisations, vaccinations, veterinary treatment, education leading to attitude change and the development of veterinary practice. Through these efforts, 20,161 dogs have been vaccinated and 12,409 animals have been sterilised.

Dogstar Foundation uses the World Health Organisation (WHO) model, which asserts that mass canine vaccination programmes are the most effective measure for controlling rabies and that vaccinating 70% of the dogs in an area is necessary to control the disease in both humans and dogs. Thus, we work throughout Sri Lanka and carefully map locations weeks in advance of our campaigns, and we vaccinate/sterilise at least 70% of the animals in any given region.

Being based in a Sri Lankan village and working within small communities, they are able to bring about real change and witness transformations. All of Dogstar’s work is outreach-based from mobile clinics to home visits and education sessions.

Education is a fundamental part of Dogstar’s plan to develop community responsibility for animal welfare and health. By challenging and developing concepts of ownership, Dogstar is transforming the way that companion animals are viewed and cared for in Sri Lanka. Dogstar works with schools and communities to teach children and adults of all ages about safe and kind interactions with animals.

In the United Kingdom, dog management is quite simple; owned dogs have clearly defined owners and don’t go out unaccompanied. Dogs alone on the street are stray/lost and will be collected by local authorities, taken to rescue centres or pounds, reunited with their owner, rehomed or euthanised if they can't be placed with a rescue or reclaimed by their owners. In many Asian countries, including Sri Lanka things are not so clear.

The World Health Organisation (WHO) categorises dogs depending on the level of restriction by a person and the intended provision of food/shelter/resources:

In Sri Lanka, Category 1 (restricted) dogs are in the minority, as most houses don’t have physical boundaries. Sadly, most Category 1 dogs in Sri Lanka would be permanently chained or kenneled, and are generally 'pedigree' dogs, guard dogs or dogs whose owners have a complete lack of understanding in animal’s basic needs.

The vast majority of dogs in Sri Lanka fall in a range between Category 2 and 4 and are usually semi-independent, with many of them moving from one category to another in their lifetime.

Thus, very often, people think that an owned dog in Sri Lanka is safer than being a street dog, however, the reality is not so distinct. Thousands of owned dogs in Sri Lanka are confined to tiny cages, with little or no access to food, water or veterinary care. All dogs, regardless of whether they are owned or not, must have both their physical and emotional needs met. Dogstar’s education programs ensure that both children and adults are given compassionate advice on how to care for owned dogs while their spay/neuter campaigns and data collection program through Mission Rabies assist in managing and recording the street dog population in an ethical, humane way.

The Dogstar Foundation began in 2006 when Samantha Green was vacationing in Sri Lanka. It was there that she came across a street dog that seemed minutes away from death. Lying lifeless on the chalky grounds of a village temple, the dog was riddled with mange and mites and was severely emaciated. Samantha, a UK citizen working in the transport industry at the time was taken aback by the sight of this creature, who was barely recognisable atop the torrid dirt piles.

Unable to walk away from this wounded street dog, Samantha quickly got to work, contacting vets and animal experts, and paying for the dog to receive the medical attention it needed.

But the problem was far worse than Samantha ever could have imagined. At every street crossing, every corner, and outside every shopfront was a roaming street dog. Most often, they were riddled with mange, a parasitic skin disease, and starved beyond belief. Thousands upon thousands of dogs were in urgent need of medical attention, scattered across the worn streets of Sri Lanka, and nobody was helping them.

The Sri Lankan government’s reputation for street dog maintenance was shameful, alternating between poisoning or shooting dogs and relocating them (or, dumping them in rural areas).

Standing with the wasted dog in her arms, in a politically volatile and foreign country, Samantha had just, unbeknownst to her, committed to the biggest project of her life. Having no veterinary experience, limited knowledge of Sri Lanka, and no contacts whatsoever in the country, Samantha did the only thing she could. She saved the dog’s life and named him Mango. Then, she uplifted her entire life and moved to Sri Lanka.

Ten years on, Samantha lives in Negombo, a fishing village on the west coast of Sri Lanka, roughly 35km north of the country’s capital. There, with her husband Mark, she runs the Dogstar Foundation, which is now one of the leading animal welfare charities in Sri Lanka. Giving up their illustrious careers in the transport industry in both the UK and Australia, Samantha and Mark work without salaries, providing much needed care to Sri Lanka’s forgotten street animals.

Just last week, Samantha and Mark were driving through Sri Lanka’s main fishing port of Negombo, when they came across a small puppy staggering along the street in temperatures of nearly 40 degrees. He was in appalling condition. His skin was in such a bad state that the fur on his back had been replaced my wounds and scabs. He was terrified, starved, dehydrated and was very close to death. Dogstar Foundation has named him Rylie and has taken him into foster care to ensure that he receives the care he requires.

Watch the video below:

Every day, the Dogstar Foundation are faced with gargantuan issues that seem impossible to tackle. From abuse, neglect and overpopulation, to government misinformation and compassion fatigue, the Dogstar Foundation relies heavily on the generosity of the public, particularly through their UK base, through donations and public awareness and engagement.

Since 2006, Dogstar Foundation has vaccinated over 20,000 dogs and cats against rabies and spayed/neutered over 12,000. The team runs monthly spay and neuter campaigns in their mobile veterinary unit, making sure to gather much-needed data on street dogs and cats in Sri Lanka through a Mission Rabies phone app, which will allow the charity to compile data and trends on street dog overpopulation in Sri Lanka so that both NGO’s and governments can work toward a more sustainable animal management and welfare system.

Dogstar Foundation uses the World Health Organisation (WHO) model, which asserts that mass canine vaccination programmes are the most effective measure for controlling rabies and that vaccinating 70% of the dogs in an area is necessary to control the disease in both humans and dogs. Thus, the organisation works throughout Sri Lanka and carefully map locations weeks in advance of campaigns with the aim of vaccinating/sterilising at least 70% of the animals in any given region.

Natalie Kyriacou is the Founding Director of My Green World and a Trustee of Dogstar Foundation. Dogstar Foundation was founded by Samantha and Mark Green in 2006 and has been working with communities and vets to transform animal welfare in Sri Lanka.

To find out more about the work of the Dogstar Foundation and get involved in their campaigns visit online at www.dogstarfoundation.com or Facebook.com/DogstarFoundation.

You can also support their work and donate online at: www.dogstarfoundation.com/donate

Anouska Lancaster: ‘I Couldn’t Imagine Life Without My Dogs’

WATCH: Does Your Dog Know Who His Best Friend Is?

Meet Benji. His owner decided to test him and ask him to identify his best friend with adorable consequences. We won't say any more,...

Talking Point: I Wanna Be Your Dog - a Rock 'N' Roll Approach to Rescue Book Club: Arthur - The Story of One Man...

Carrie Preston is an American actress who has established herself on stage and screen both in front of and behind the camera. Having starred...