Sybille Fleischmann and her husband, former solder and aviation mechanic Michael have embarked on the journey of their lives. They’re still out there now, travelling across Asia to raise funds to reduce poverty. There’s one crucial difference between this and the many other worthy fund-raising causes - the dogs are joining in.

Since childhood I already knew I wanted to see the world! I finished school, and my study of Social Pedagogy, and before the ink on my Diploma was even dry, I found myself accompanying Michael on our overland drive in a V.W.-van to India. Since then everything has been different. I already knew that other people are not as privileged as us. But seeing poverty, suffering and oppression with my own eyes, inspired a feeling of wanting to do something to help alleviate the burden of the poor. 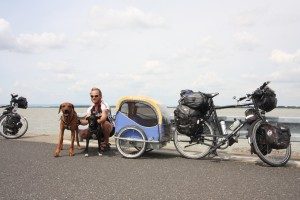 We were ever-vigilant of the hardships faced by the local communities we passed on our way, and we set aside a small amount of our travel budget to ease their hardships a little. Now I see that the time has come to start out on an even larger project. This time we’re taking our dogs with us.

When the dream “Bicycle Travel” appeared in our minds, we were already proud owners of Gomolf, a male Rhodesian Ridgeback and Diu, a female Mix that we picked up from an Indian beach three years ago. This is why we knew from the beginning: If we do that trip, the dogs will come with us. But is that practical?

We had more questions than answers. How far can a dog run per day? Do we need bicycle trailers for them? What do we have to keep in mind for border crossings? We searched in the Internet, read books, asked dog specialists and vets to gather enough information. What we found out was not very encouraging:

The dogs would not stand such exertion, “you are cruel to the animals” I thought to myself.

But nobody tried it before, this is why we did not want to give up so fast. So there was just one real option: prepare as best we could – and then just start.

Our first stage was from Munich to the Coast of the Black Sea in Romania. Most of that, we cycled on the Danube Cycle Way, which brought us via Austria, Hungary and Serbia to Romania. Especially in Serbia, we got a lot of attention. When we passed through small villages, the people waved to us with a broad smile on their face. Many of them invited us on a coffee or beer, sometimes we were even invited to sleep is someone’s house or garden. 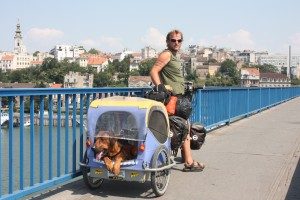 Fortunately, the Serbian hospitality turned out to be very robust. When we camped a couple of days in the garden of a guy called Milan. He a very friendly young man, we also made the acquaintance of his mother who lived next door. On the third day, we woke up from her surprised shouting. Yesterday, she had a roast duck in her oven. Where did it go?!

Diu, our little Indian street dog, had slinked into the kitchen last night and tugged the whole roast out of the oven. Ashamed, we solved the mystery about the vanished duck. Milan, who stayed in Asia for a long time, explained: “My mother is from India, she can't help it!” There the woman nodded sympathetically and disappeared in her kitchen. She came back with a hand full of meat pieces, that she all threw to the dog. Diu swooped greedily for it. Education effect – negative. But we were glad that Milan’s mother was not angry.

To find out more about Sybille Fleischmann's journey and support their social project for homeless kids in Cambodia, visit www.cycle-for-a-better-world.org