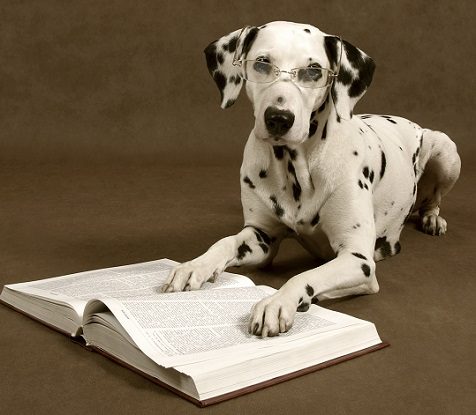 Continuing our series giving names to the unusual habits and behaviours of our dogs, this month K9 Magazine's Dogosaurus features some particularly common habits, guaranteed to bring a smile to the face of any dog lover.

The act of vigorously rubbing one’s chin on the ground usually to squeals of extreme pleasure and most often following the consumption of a good meal.

Excited act normally brought about by confusion which leads the dog to appear to be dancing. Common dance moves include ‘doing a twirl’ (spinning round wildly on the spot), ‘doing the River Dance’ (front feet shuffle) or ‘break dance’ (acrobatic jumping).

All acts of auditioning for River Dance may occasionally be accompanied with the dog’s own unique vocal performance.

We’ve all seen them. The big screen hard men who, in reality couldn’t and wouldn’t fight their way out of a wet paper bag. Say hello to my little friend… The Canine Hollywood tough guy. Meet the dog who makes all the right noises when danger approaches. The dog that really looks the part when springing to the defence of their pack mates, growling, snarling, posturing. The dog who rattles of threats as if reading from a slick Tarantino film script. The dog who turns and runs an absolute mile in the opposite direction when they realise their enemy is actually genuine and not just some poor chap delivering mail before making their way to the next house. The Hollywood tough guy; learn to love them for all their bravado and entertainment factor but don’t ever expect them to pull you from a burning building or defend your honour when faced with your arch nemesis for real.

Sufferers of China Shop Syndrome can often be large breed dogs which possess enormous levels of physical power but very little knowledge of how to channel or control it. The condition manifests itself in situations where a degree of delicacy is required but is instead met by sufferers propelling themselves at full tilt without emphasis on stealth, balance, cornering or even avoiding valuable ornaments and/or people unfortunate enough to get in their way. Dogs suffering with China Shop syndrome should ALWAYS be insured as breakages are guaranteed throughout their lives.

Dogs who are able to enter a sweep-steak need to be good planners, dextrous and swift. The act of ‘sweeping the steak’ requires the dog to judge the time it will take between a person leaving an un-guarded plate of food at the dinner table before being able to jump up, ‘sweep-the-steak’, consume it and return themselves to their exact starting position before the human returns. The human loses the sweep-steak if the dog has eaten their food but was not spotted committing the act and is now returned to the same starting position as they were before the person left the dinner table. In cases where the dog wins the sweep-steak they cannot be punished or even shouted at as the deed has already been done and they were not caught doing it. The dog loses the sweep-steak however if they are caught in the act of jumping up, sweeping or consuming and can be penalised by being shouted at, going without their own dinner or in serious cases, can be ‘sin-binned’ in a locked room for a short period ‘to think about what they have done’.

(SIDENOTE: Sufferers of ‘China Shop Syndrome’ should never attempt to enter a sweep-steak as they are more likely to destroy the plate they are trying to sweep from and in some cases they will cause an entire dining table to be written off as a result of a badly executed sweep-steak.)

Stay tuned for our next edition and more from K9 Magazine's 'Dogosaurus' – in the meantime please share your own canine's antics with stories, photos and videos to submit your own entry!

Talking Point: Are These The Best 10 Dog Selfies On The Internet? We Think So! Lifestyle: Interview with Bitsie Tulloch Review: Best Dog Products of...

Well hello, as always we're thrilled to be here bringing you a selection of some of the latest and best dog products! We hope...

It's been quite a year for new product launches and successes in the pet industry, continuing our series finding the best dog products around...