In Science, the road to discovery is a long and crooked one. To this I can testify. It is filled with many more failures than successes and these failures are significant because they can guide us towards our goal. My work over the past 50 years is evidence of this, says John W Pilley, author of the new book 'Chaser: Unlocking the Genius of the Dog Who Knows a Thousand Words'.

As a behavioural psychology professor at Wofford College in Spartanburg, South Carolina, I began my experimental career with rats and pigeons. But it was our family dog Yasha that inspired me to transition to dogs, which was infinitely more fun for the students and myself. Yasha was a brilliant Border Collie/German shepherd mix with a bold spirit and fearless passion for accompanying me on my outdoor adventures, such as rock climbing and body surfing white water rivers. He was able to learn behaviours at lighting speed, and because of this I was convinced his intelligence would shine in our laboratory.

Unfortunately, while Yasha was brilliant, I was not. I had been barking up the wrong tree. My goal was to teach dogs proper nouns and I was miserably unsuccessful for over 10 years. Yasha and other dogs could not learn nouns independent of actions. For example, if I told Yasha to go get the “paper” in the morning, he would race out the door almost before I could speak the words to retrieve it. However, once the “paper” was in the house and I asked him to find it in the room, he was confused. It made no sense to him; he wasn't able to identify the paper without it being associated with the yard. 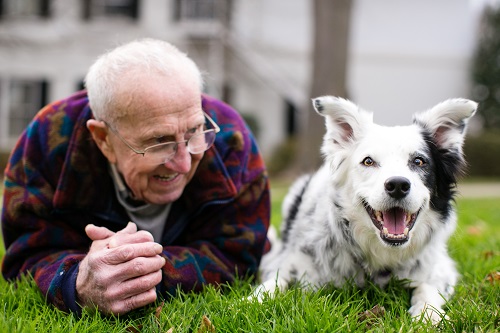 John and Chaser, pictured above

Where we did succeed was in teaching a series of complex behaviours. For instance, having Yasha figure out how to reach a treat on a very high shelf. He would have to open a door and push a chair over to a desk, so that he could climb on top of it to reach his reward. This displayed reasoning as well as memory. But to my dismay, all of our findings consistently showed that dogs only identified nouns coupled with behaviours. Entering into my retirement, I reluctantly concluded that dogs could not learn nouns.

It was during my retirement that I became slightly obsessed with Border Collie exhibitions. Surrounding a campfire one evening with about 5 of these farmers and their dogs, I boldly espoused “You know, science tells us that your dogs don't even know their names, it's simply a signal to pay attention. They cannot learn common nouns.” I was met with stone cold stares and silence.

After a few long and awkward moments, one crusty farmer drawled out “So that's what science says, hunh?” Another farmer slowly chimed in “I'd appreciate it if you and the other scientists that have looked into this could explain something to me. If Rascal here” - he nodded at the mostly black Border Collie lying at his feet - “doesn't understand words or names, how come I can ask him to herd sheep out of the flock by their names and he'll do it without a hitch every time?”

I was significantly humbled and realised I had been barking up the wrong tree. My methods were seriously flawed and I needed to start listening to the people who worked with dogs in traditional ways, channeling the dogs instinctive nature.

This was the game plan when we adopted Chaser from my mentor and legendary Border Collie breeder Wayne West. For centuries, Border Collies have been breed to give their eye to the sheep and their ear to the farmer. I would use her natural gifts and internal drive to teach her the names of objects. Her flock of sheep would be her toys.

My wife Sally and I adopted Chaser when she was two months old. She had a very sweet and gentle disposition. Although much different from Yasha's bold gregarious personality, she had the same intensity of attention and curious drive. But before I taught her words she needed to know the ABCs of the basic obedience commands, which she aced very quickly.

My plan was to teach Chaser proper nouns, using an implicit conceptual understanding of words, by playing with her. Play would give the object value in her mind, and by extension value to the words. It would also release innate instinctive drives like chasing and catching, that Chaser loved. I began very simply with one object on the floor. This was critically important because it created error-less learning and enabled Chaser to accumulate many small successes. I never wanted her to feel bad about her performance.

For a period of 3 days I showed her a blue racquet ball that I called “blue”, repeating “Chaser, this is blue, find blue”, “catch blue”, “where's blue”, etc. I would keep the sessions to about 5 minutes in length. They were highly energetic in order to sustain focused concentration and a positive mood for Chaser and myself. I used a very soft excited voice, and constantly using positive reinforcement, I repeated this many times throughout the day. 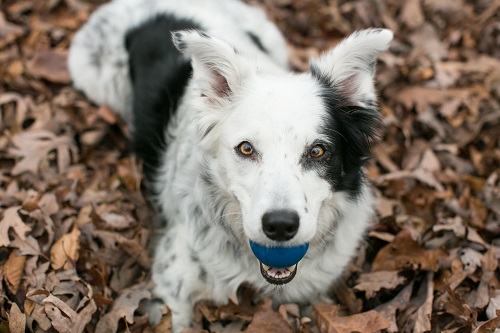 After 3 days, Chaser was able to retrieve “blue” from another room without being in my presence. I was super excited that she had successfully logged this object into her long term memory. We were ready to repeat the process with a new toy. After a couple of months and approximately 200 toys, she had that “aha moment” understanding that objects have names. She was now able to learn the name of a new toy on one trial. For her to maintain the toy in her long term memory, she needed repetition, which is necessary with all learning. At this point, her learning became extremely fast and she was to understand categories of objects; common nouns. She knew her Frisbees by name, but also made the connection that anything round, flat, and flew through the air was a “frisbee.” Other categories included trees, rocks, cars, sticks and pine cones.

By teaching Chaser through play that objects have names, we have set the stage for her to move onto more complicated grammar; she comprehends combinatorial learning, elements of syntax, adverbs as well as imitation. And her working memory appears to exceed my own.
Thus, learning builds on learning.

Some people wonder why I did all of this. I did it to test the boundaries of the canine mind and demonstrate to the scientific community that our dogs ARE as smart as we think. I have been very surprised with the depth of Chaser's intelligence and her mental processes. When we ask her if she “wants to go”, she shows her interest by locking her eyes on mine and tilting her head. I know she is asking “Where are we going?” She won't move until she knows. If we are going to the store, she sulks away uninterested, knowing she will have to sit in the car alone. If we are going to Nora's house, she leaps towards the door. Chaser also has to clean up her toys, which she does reluctantly, only when asked. And like a child, she's as sloppy as she can get away with, unless I tell her “clean up and then we'll play chuck-it”. Then she moves quickly and with purpose!

Chaser has not simply been my research subject; she has been my research partner and has taught me infinitely more than I have taught her. She is a member of our family and I am hugely grateful for the joy she has brought into our home. My biggest hope is that there will be a world filled with Chasers. If you respect your pet as an individual and play games that make your dog happy, using lots of positive reinforcement, you'll be amazed at how many words your dog can learn and how enriched your communication and relationship will become.
Now go play with your dog!

John Pilley is the author of CHASER: UNLOCKING THE GENIUS OF THE DOG WHO KNOWS 1000 WORDS, published by Oneworld 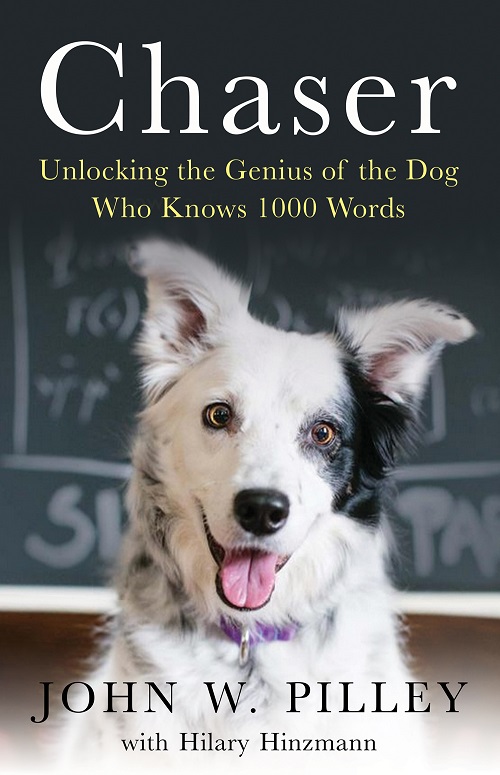