The easy, simple way to crate training a dog.

Training a dog or a young puppy to accept a crate as part of life can be a good idea. As more and more people discover the benefits of having a dog that is crate trained. There are also the people that think that crate training your dog is somehow cruel or seen by the dog as a punishment. There is nothing cruel about it. Young dogs can get themselves into an awful lot of trouble if you just leave them to their own devises when you go out. Natalka Jacyszyn explains why crate training is such a good idea. 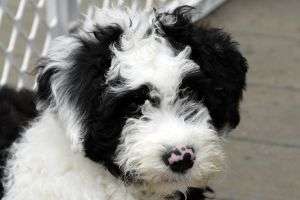 An Introduction to Crate Training a Dog

If you introduce the crate to your dog gradually then you will find that the dog will use it as his bed and will be very comfortable in there.

As with most things, it is much easier to crate train a puppy than an older dog that has never seen a crate before.

You should never put your dog into a crate for punishment, otherwise you will end up with a dog that won't go anywhere near the crate, which is the opposite of what you are trying to achieve. Always make sure that you use the crate in positive circumstances rather than negative. Do not try to force your dog into the crate as the dog will become fearful, most dogs do actually like crates as they like to make dens so they will view their crate as a safe and secure place to be. Also do not leave any dog or puppy in a crate for extended periods, unless you have someone, maybe a member of your family or a neighbour that can come and let your dog out to go to the toilet or just to stretch its legs. You shouldn't really leave a dog in a crate for more than four hours at any one time.

When you first purchase a crate, you should make sure that you get the right size, the crate should be big enough for your dog to stand up and turn around and lay down in. If you have a puppy that is going to grow into a large dog then you should get a crate that will fit the size of the adult dog and let the puppy grow into it. If you do this though, do try and block off part of the crate as it will be too big for the puppy to begin with, and you don't want the puppy soiling at one end and sleeping in the other.

Crates are really useful as you can use them for travelling in the car, or at night when you go to bed and when you have to go out. They are also great for house training as a dog will tend not to want to soil near its sleeping area, so as long as you let the dog out at regular intervals then this method should be fine.

There are a few types of dog crates on the market, these are: wire cages, plastic type pet carriers, soft sided crates and nylon crates. However the wire crates are the most popular and therefore are the ones that are the most commonly used. People generally like these as you can see through them and if you do want to block out any light then you can always put a blanket over them. These crates are also collapsible and have a plastic tray in the bottom that slides out and is easily cleaned.

Try and place the crate in a room where there is going to be people, as if you hide it in a corner somewhere, the dog may feel like it has done something wrong as it has been isolated from the rest of the house.

When you first introduce a crate you should leave the door open and just let the dog go in or out as he pleases. You can put a nice comfy blanket in there and toys, you can even give meals and treats in the crate as this will accustom your dog to the crate without pushing or forcing him in there. However do not put a water bowl in the crate as if it gets knocked over everything will be wet and soggy.

Do not put the dog in the crate with the door shut until you feel that he is at a stage where he is comfortable being in the crate.

By just leaving the crate door open you will probably find that he will go in there himself, as most dogs do actually like crates, they like having their own little den to sleep in.

You can go in and out of the room and just go about your business and not take any notice of the dog.

Gradually lengthen the time that the dog is in the crate, and then when you think he is happy in there you can shut the door, but when you do make sure you open it straight away, keep doing this at intervals during the day.

The next stage is to shut the door and go out of the room, come straight back in and open the crate door, this is so that the dog starts to realise that when the door is shut, you are going to come back and not just leave him in there.

Gradually lengthen the time you are away for until your dog is comfortable to be left in the crate on his own and is not barking or whining. If your dog does bark or whine then make sure that you don't let him out until he has stopped as he will think that by barking he will be let out and therefore he will keep doing it.

When your dog is comfortable with this stage, then you can move onto the next. Whenever you want to introduce something new to your dog or puppy always make sure that you don't move too fast as you risk having to go back to the last stage or worse still, right back to the beginning of the training, and ultimately this will take longer.

Eventually if you keep doing this very gradually, then you will have a dog that loves being in his crate, and will want to go in there whenever he wants to be on his own to just go to sleep. These days crates are quite a common sight in many homes.

This training is great as you can go out and leave your dog and you won't find destruction anywhere ever again!