Sitting in an office at the Greater Manchester Police dogs unit, waiting for Sergeant Gary Mitchell, I noticed something rather inspiring. On the wall was a badly photocopied piece of paper bearing a picture of a German Shepherd. Underneath the picture were details of some sort of party, meeting place, dress code, start time and so on.

It turns out the dog in the picture is Monty and it’s his leaving do, all are welcome.

They obviously do things properly in Manchester. Having a leaving party for a retiring police dog (who would be spending his retirement in Canada incidentally) is just one of the things I picked up on during my day at Hough End training centre, which illustrated just how much respect and affection the dogs have from their handlers and the unit. 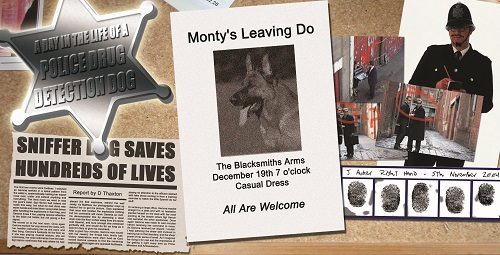 Upon meeting Sgt Gary Mitchell, explosives detection and patrol dog handler of sixteen years and now continuation training Sergeant, I am prepared to ask a few key questions, take a few snaps and leave with enough information to piece together Gary’s average day. Little did I know that I would soon be handling enough Semtex to destroy the entire building, coming face to face with some of the most impressive and yes I admit, scary looking patrol dogs I have ever seen, before witnessing the most impressive feat performed by a dog since Lassie rescued little Timmy from the mine shaft.

As we walked to the kennels to meet some of his ‘colleagues’, Gary explained how he came to be paired up with one of his current partners in crime prevention. “Gemma was a gift dog who came in just before Christmas about five years ago. She’s an English Springer Spaniel. I got a call asking me if I could take her home over Christmas, because we don’t like to leave young dogs on their own. During that time a vacancy came up in the explosives detection department, so I put Gemma on the course and she passed with flying colours. She was a complete natural. She’s lived and worked with me ever since and she’s now coming up to her sixth birthday”

As Gary waxed eloquent about Gemma, I couldn’t help wondering how hard it must be putting your best friend through manoeuvres where one wrong step could end up in tragedy. 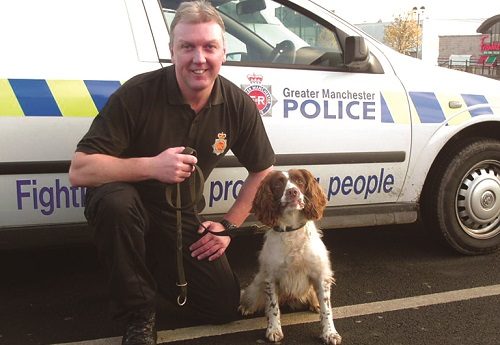 “You do worry about these things. Even with my patrol dog Kane. You’re out there with your best friend, and when it gets dark it is hard not to think about what could go wrong. If they are tracking a person, you don’t know whether that person could hurt the dog. But the dog is trained to follow instructions, so as long as the handler is sensible the risk of harm is always lower. Recently an inmate at Strangeways prison threatened to kill one dog that found his stash of drugs, and this is always a concern. If a person finds out where you live, they could throw a piece of poisoned meat over the fence and that’s it, you have to be a lot more careful when your pet is a police dog. That dog is willing to die for you”

As a layman it was hard for me to discern between all of the different dogs in the kennels and what they were best at. Gary explained what he needs in a police dog. “The first thing I look for is a dog that wants to play. Whether it is for patrol or explosives detection, I need a dog with high energy, he or she needs to have a spark. Also they must want to do the exercises. We look out for dogs that are instantly aggressive, that is something we don’t want. Obviously we need controlled aggression, but naturally aggressive dogs become hard to train. The dogs we look for are friendly, confident dogs, dogs that would happily walk into a room full of people or a dark, empty warehouse. The dog also should have a desire to please his handler. I find the best breeds for this are the German Shepherd and the Malinois. We have used Rottweilers, but they are not usually as sharp as the GSD.”

Upon meeting some of the patrol and protection dogs, it was a lot easier to appreciate why German Shepherds are the dog of choice for the police force. To touch the dogs is to go some way towards appreciating the sheer strength they posses. To feel the power of a playful nudge of their head against your leg is to sympathise with the fate of any troublemaker about to be apprehended by one of these guardian dogs.

Whilst detailing the pride of having his dog find a criminal that has evaded the officers, Sgt Mitchell inadvertently gave away something about himself. He is definitely a dog expert working with the police as opposed to a police officer who happens to work with dogs. A dog lover and dog owner long before a police officer, Sgt Mitchell, who holds the title for ‘overall criminal work’ at the National Police Dog Trials, is now in the position where he and his team of dogs are responsible for the safety of even the most important of visitors to Greater Manchester.

“When Tony Blair visited Manchester as Prime Minister, we had to ensure the area was safe. This exercise is typical of what I do with the explosives detection dogs when there are guaranteed big crowds. The Police Officer Search Advisor will asses the search that we need to do, the dogs are then instructed to perform a detailed search of a specific area and we report back our findings. It is comforting when the dogs signal at something that initially appears to be safe, but then is revealed to have come into contact with explosive material at some point. It demonstrates how sharp the dogs are”

What happened when Sgt Mitchell put his explosives detection dog to the test.

I couldn’t leave without seeing Gemma in action. Sgt Mitchell and his colleague Sgt Shaun Herron kindly agreed to set up a scenario in the training centre which would show off Gemma’s skills to their full potential. Sgt Herron took two, very small pieces of plastic explosive (which has no smell to a human nose) and hid them whilst I met up with Gemma in her kennel. Sgt Mitchell’s last words to Sgt Herron before he set up the search were “Don’t make it easy for her Shaun, this lad’s a journalist, he’ll know”

So off I went with Gary to meet Gemma, who was having a nap in her kennel. I was surprised by how overtly friendly and active she was, for some reason I expected her to be focussed and professional from the minute she woke up, after all this dog was only months ago responsible for the safety of the Prime Minister. Gary explained that for most of the time she is a pet dog, and even when she is working it is all a fun game to her where the prize is a tatty old tennis ball. As soon as I finished making a fuss of her and the special lead was clicked onto her collar, she knew it was show time. The nose hit the floor and all distractions were ignored. I followed as Gemma led the search.

The first two rooms were fruitless. I watched as Gemma worked in a spiral pattern from the walls in, systematically casting her expert nose over, under and behind anything and everything. The third room we went in was the gent’s toilet. Sgt Herron had indeed not made this easy, but what he had done was wash hands and dried them using toilet tissue after handling the explosives in their bag, and Gemma knew it too; paying special attention to the toilet roll holder but not giving a firm signal.

We moved on to the next room. Once again Gemma worked her way around the walls, with her handler instructing her as she went, and then bang. Gemma’s backside hit the floor as if she was playing musical statues, she sat motionless, her nose millimetres from the wall. Sgt Herron confirmed that was where he had placed the first explosive, behind the wall cavity. As Matthieu our photographer crept up behind her to get his picture, Gary explained that once she locates the explosives nothing but his command will move Gemma an inch. He demonstrated this by slamming a steel chair onto the floor inches away from the stone cold Spaniel, and sure enough she remained perfectly still, and would do for as long as it took for Gary to give his command.

After a good four minutes, Gemma was issued with her reward, the thread bare tennis ball. Victory celebrations were short lived as Gary moved Gemma onwards to find the remaining explosives. Once again she operated faultlessly, paying no attention to the officers stained with fake blood coming in from a training exercise to watch the little Spaniel do her stuff.

On entering a large office, Gemma headed straight for a desk and with no hesitation planted herself on the deck with her nose pointing at the drawer where Sgt Herron had secreted the other explosives. Once again Gemma was made to wait minutes before receiving her command to move. As Gemma received her reward, I couldn’t help admiring the sheer skill involved in training her to that standard, and the sheer power of her sense of smell. As I imagined her doing it for real and the importance of her getting it right every time as Prime Ministers and Ambassadors as well as the rest of us relied on her to do so, Sgt Herron explained it in Gemma’s terms.

“All of that for a bloody tennis ball”.

1. The dogs have been trained using live explosives. Semtex and plastic explosives have been routinely handled by the officers in the day to day training of the dogs.

2. Greater Manchester’s explosives detection dogs have never (at the time of original publishing), in the history of the police force, failed to detect live explosives in the public domain.

3. On average, a dog’s working life is seven years. Upon retirement the vast majority of the dogs continue to live with their handlers.

4. During the Commonwealth Games in Manchester, containers that had travelled around the globe were identified by sniffer dogs as having explosives on board. It was revealed after inspections that the containers had been used to move explosive material up to three years prior, and the dogs still picked up on the scent.

5. Explosives detection dogs are trained to remain entirely still the second they pick up a scent. This is so they do not disturb what could be a large explosive device. This is called passive indication and is also used by cadaver detection dogs.

K9 Magazine wishes to thank Sgt Gary Mitchell, Sgt Shaun Herron and all at Hough End training centre for their hospitality and help with this feature.