When we domesticated dogs, we limited their ability to explore and respond to the instincts that they once relied so heavily on. Shaping play and training to stimulate these instincts and urges is a good way to get the best out of a dog – as well as an excellent way to accelerate obedience training.

Breeds from the Gundog group, for example, tend to have a latent urge to retrieve, says Sam Lee, but games that stimulate retrieving from memory aren't limited solely to Gundogs. Most dogs will enjoy the following exercise and will benefit mentally from it too. Even if they never go hunting, many dogs love to learn the tricks of hunting retrievers.

A busy hunting retriever may have to remember where several birds fell and bring back every one. Hunters call this marking, but you don't have to go hunting to enjoy this challenging game. Warm up with a few throws where your dog can see exactly where the item lands. Then throw the retrieving item so it falls just out of sight, perhaps in tall grass or behind something. Your dog should have no problem finding and retrieving it. 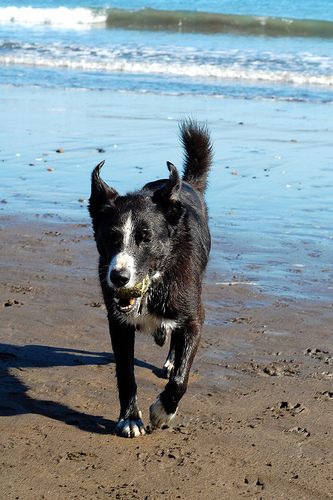 Next, hold him or have him sit and stay until the item has landed before sending him to retrieve it. As he gets better, make him wait slightly longer, up to 30 seconds. Now he is using his memory to find an item he saw land earlier but can't currently see. But can he find two such items? Probably not at first, unless he can cram them both in his mouth. More likely he will run to one and then take it to the other and either trade items or stand there and wonder what to do. You need to show him how to bring them both back to you, one at a time.

If you used the “hallway trick” to teach him to fetch, you have a head start. That's where you sit in the middle of your hallway and throw a toy one way and when he brings it back, you immediately throw another toy the other way. That way he already understands the concept of bringing back something and immediately leaving for something else. But the hallway doesn't work for big dogs; there's just not enough room. Besides, you'll be throwing both items before he brings one back, which makes a big difference.

Still, one concept remains: You need to make it impossible for him to get to the second item without going past you first. One easy way to do this is to stand at the corner of your house (or the outside corner of a fenced yard). Another, and more ambitious, way is to divide your backyard almost in half with temporary fencing and stand at one end of the fence.

In either case, you'll throw one item to one side of the corner or fence, and the other item to the other side. Let your dog watch both of them land. Send him first to get the item you threw second; this will make it easier for him. Encourage him to bring it back and, once he's given it to you, turn him to face the other object and send him for it.

You may have to run part of the way with him if he seems confused. As he gets more experienced you can back away from the fence or corner, leaving a gap between it and you. Call him toward you if he forgets and heads directly to the second item without first bringing the first one to you. It may take some practice - nobody said this was easy - but eventually he'll be able to do this in an open field. And that's when it's lots of fun.

The aim of the exercise is to stimulate the dog into using his own memory to succeed. The more times you perform this exercise, the more your dog will come to realise that using memory, even just short-term memory, will inevitably result in success, which always results in praise and fuss.

How did your dog do? Let us know - send your photos and videos to mail@k9magazine.com - we'd love to see your dogs taking part.