It is estimated that the pet industry in Hong Kong is less than twenty years old. Thirty or so years ago, the economy in Hong Kong would not have allowed for its population to be able to afford a dog. In the late eighties Hong Kong experienced a huge economic boom, and people’s disposable incomes rose from almost zero, meaning that the majority of the population could think beyond buying daily necessities and look to making lifestyle purchases.

Since the liberation of the Hong Kong wallet, people have looked to dogs as status symbols. Ex-pat residents such as Darren and Rachel Whitfield, approaching Hong Kong with a more traditional approach to dog ownership, have found it an interesting challenge to fit with Hong Kong’s unusual take on dog ownership.

Here is their story.

“We were sitting in a restaurant reading the local Hong Kong paper when the face of a cute puppy caught our eye. It was an advert for Hong Kong Dog Rescue trying to find a home for rescued dogs. Busta was advertised as a Shih Tzu-cross who had lost an eye in the rescue centre during a confrontation with a bigger dog.

My wife’s eyes swelled with tears reading the story. We had desperately wanted a pet since our move to Hong Kong a year before, and her compassion insisted that this had to be the one! We met Busta the next day amongst a pen of 35 excited small to medium dogs all abandoned and in need of homes. Another 35 large dogs barked desperately at us through the adjoining fence. Busta was a little dirty, and sad but we could see the heart of gold and calm personality. It was a little heartbreaking, but comfort came in knowing these were the dogs that have been rescued. 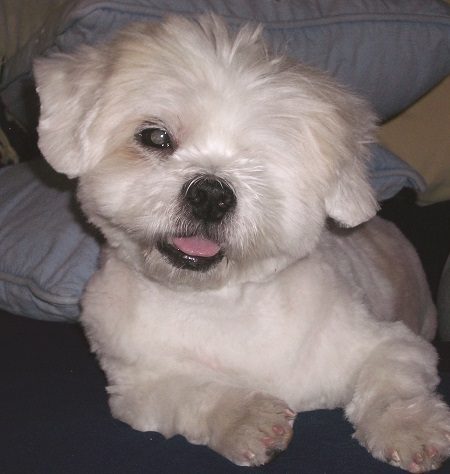 In Hong Kong alone over 40,000 dogs are abandoned each year and the government pound only allows 4 days for collection before putting them down! An astounding figure that ensured we would do our bit for one dog at least. It is quite common to see stray dogs lazing about in any non built up area they can find. There doesn’t seem to be the responsible attitude of spaying and neutering dogs here.

Owning a one-eyed dog can be a challenge in itself. With the loss of one eye you lose depth perception so it’s quite common for the little-man to cut corners a little too close. Glass doors become a daunting task and Busta quite commonly tries to walk through them! I also have to remember to throw the bone or toy on the seeing side of the dog or he’ll be waiting at your feet forever! This is also particularly useful when trying to keep him away from other dogs. If they pass down his left side he commonly will miss them!

Living in Hong Kong certainly has its disadvantages for the dog lover. Practically everybody lives in high-rise apartments and grassed areas are few and far between. Many people have smaller dogs like Pomeranians that are carried around as a fashion accessory in Burberry and Gucci dog bags. Also popular are Shih Tzu’s, Pekingese, mixes and Labradors. With the size of most apartments in Hong Kong (less than 1000sqft) I don’t know how practical a Labrador can be?

To make things worse for the dog owners nearly all of the urban public “parks” carry the sign “NO DOGS ALLOWED”. After living here a while I understand why this has happened, as many dog owners do not pick up after their dogs and leave “land mines” wherever they lay. This selfish attitude has forced local councils to ban dogs from the few grassed parks there are! As the majority of Hong Kong people don’t own a car, getting to a far away park can be difficult. You can take a dog in a taxi for an extra $5HKD (around 38p) and a small dog can be carried in a bag on the bus also. On the plus side there are plenty of good pet stores, grooming salons, and excellent Veterinarians.

As an expat living in Hong Kong travelling around Asia is just too tempting. It’s fortunate that most of our friends who would love to have a pet haven’t yet done so due to the small size of their apartments and their love for travel also. Hence finding a dog sitter for that special weekend away isn’t too difficult. We can’t help thinking how nice it would be to take the little-man away with us. Of course quarantine rules, exposure to disease and air travel always prohibit this.

Little Busta has come full circle now. From an abandoned, depressed, shabby one eyed dog to a pampered, adored little star that makes friends wherever we take him. We feel a sense of pride that we have done our bit to turn one little dogs life around and continually spread the word around Hong Kong that the best way to own a furry friend here is to adopt…they need love too!”

Do you have a view of dog ownership abroad? We'd love to hear from you!