As Emily Carter discovered, it is not considered a threat to livestock, which is unusual for a fox, but this is an unusual fox, so unusual in fact, that it is the only member of its genus, Cerdocyon. Living in a part of the world where bush often meets wetland affords an animal plenty of hunting opportunities as well as periods of hunger. As with all foxes, the Zorro is a smart hunter and not a fussy eater.

Frogs and small rodents join crabs on his shopping list, but anything else that takes his fancy is in danger of becoming prey very quickly, such is the opportunistic streak common to all foxes that allows them to stave of hunger.

They are omnivorous and will survive on fruit, vegetation and even scavenge from other kills. There aren’t many areas where civilisation and Zorro habitat collide, meaning the opportunity to become urbanised hasn’t presented itself to this particular species.

One unfortunate thing about the Zorro is that, although their numbers are healthy and manage to survive without too many problems, they are hunted in some areas of Botswana and Chile for their pelt, which is absolutely worthless. The threat of being hunted is driven purely by the fact that they resemble other foxes with slightly more ‘wearable’ fur and end up as a moving target for uninformed hunters. 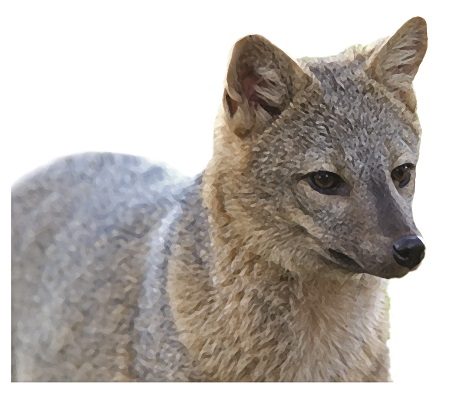 Physically, he is a medium sized canid, not too different to the Red Fox we occasionally glimpse in our own countryside. His coat is a darker shade often with purple hues, although sometimes a dull grey for parts of the year. His face is thinner and his tail less bushy more dog like than other foxes. The snout of the Zorro is short and stopped, almost like that of a Jackal, which didn’t escape the notice of the taxonomists that named him, Thous, which is Greek for Jackal, although the Zorro is substantially smaller than the Jackal.

To the casual observe, the Zorro should be easy to distinguish from other species, due to his colouration and face shape. Tinges of red, purple and dark black at the feet mark him out amongst other South American Foxes such as the Cupeo, who sports a more rusty coat.

Like most Foxes, the Zorro is nocturnal, coming out to hunt just as the sun sets. Remarkably, hunting patterns differ widely from region to region, mainly dependent on the type of prey which is most abundant in that particular area. Those living nearer to wetlands favour a lower risk hunt, focusing on frogs and crabs, whilst the Foxes living in drier land and on pampas land prefer to go for bigger prey such as rodents, but take the risk of being out run and going hungry for a while, usually until they can find some berries to tide them over.

His genus name, Cerdocyon means “crafty-dog”, which like most of his cousins across the globe, is still true today. The Zorro tends to be monogamous and it is not uncommon for small clusters of them to congregate and work in ‘family’ units throughout their range. It is gratifying to learn that throughout their range, especially in Northern parts of South America, they are abundant.

The female producers smaller litters than most of her European cousins, typically around three or four. She will do this on average twice a year, with the same partner usually. The young are mature at around eight months.

One problem that is posed to the happiness of the Zorro is the encroachment of feral dogs on to its habitat. Certain parts of Southern and Central America have high numbers of feral dogs and many are stronger and larger than the Zorro, meaning any disputes over territory are solved quickly and in the favour of the newcomer.

Farm land is gradually making its way towards the wetlands and woodland which are currently home to many families of Crab Eating Zorro, but there is no immediate threat or concern for the well being of the species.

Look out for the next installment to see who's up next! In the meantime, let us know who's your favourite of the canine cousins! We'd love to hear from you.