Looking after a dog that has an illness requires varying levels of care depending on the situation and severity.

Jess Buskirk had to take steps to alter her lifestyle to accommodate her dog, Luke, when she discovered he had epilepsy, a disease that affects up to 5% of the canine population, but only 1% of humans.

I stared at the paperwork in my hands. It was nearly midnight, and I could hear Luke in the back of the emergency animal clinic. He was howling inconsolably as my hand hovered above the signature line on the paper that would instruct the vet whether to resuscitate Luke if he flat lined.

I stared at the paperwork in my hands. It was nearly midnight, and I could hear Luke in the back of the emergency animal clinic. He was howling inconsolably as my hand hovered above the signature line on the paper that would instruct the vet whether to resuscitate Luke if he flat lined.

At that moment, all I could think about was my 96-pound Alaska Malamute mix falling to the kitchen floor, succumbing to the eighth seizure in less than an hour. I didn’t want him to suffer anymore than he already had.

I looked at my husband Wayne for guidance. There was no hesitation in his face. He told me to sign the line that said to use all life-saving measures, so I did, grateful to him for making the decision. 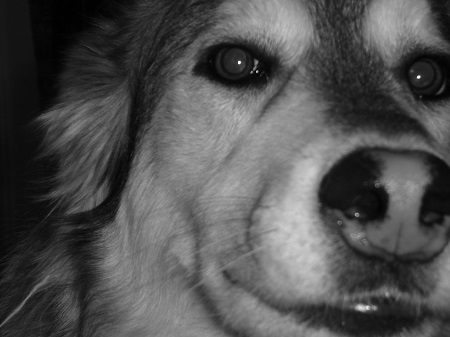 Wayne’s decision was right. Most of the time, Luke is healthy. But there are moments of terror, when Luke’s eyes go blank and his head begins to shake. His jaw locks open, drool pouring out, and his body stiffens. The seizures almost always happen in the middle of the night, waking us.

We nearly wrote off his first seizure as him having a bad dream. It was two years ago when Luke was 3 years old. He woke us up, paddling his legs against our bedroom wall. He didn’t respond when we called his name. After about 45 seconds, he was OK, though he had trouble walking after.

He had his second seizure the following morning and we took him to the vet. Luke was diagnosed with idiopathic epilepsy, a broad term for seizures that have an unknown cause. We put him on a minimal dose of Phenobarbital, a medicine that suppresses his nervous system. Twice a day, he took a pill and life returned to normal, although I never slept quite as soundly as I did before that first seizure.

Every six months, Luke gets his blood drawn to make sure the level of Phenobarbital is at a therapeutic level.

Luke did well for a year. He didn’t have another seizure until we moved to a different city, and we began to wonder if his seizures were triggered by stress. His new vet increased the level of Phenobarbital.

Since we moved to our new city, Luke has at least one seizure every two months. We are now up to eight pills, or 480 mg of Phenobarbital, a day, and we recently added Potassium Bromide in liquid form. The Potassium Bromide makes Luke’s hind legs weak and tastes so bad he gags when he catches a whiff. We mix it with half a can of wet food, which works well.

According to the Canine Epilepsy Network, a team of American researchers and vets, epilepsy is the most common neurological disease in canines but it’s unknown how many dogs are affected. Some studies estimate up to 4 percent of all canines are affected with that number rising within certain breeds.

We’re still not sure what triggers Luke’s seizures, although we’ve heard several theories. A few of the doctors in Luke’s veterinary practice believe the full moon triggers seizures in animals, but that hasn’t held true for Luke.

His seizures have worsened and become more frequent since I became pregnant in January. Pregnancy is another theory we have encountered, and I’m hoping Luke’s condition improves when my son is born in a couple of weeks.

Some dogs develop epilepsy after a traumatic head injury, such as being involved in a car accident. We’ll probably never know the true cause of Luke’s seizures but we have found some tricks that help him come out of an episode.

Having a plan for when it happens helps keep us and our other dog calm, especially since the seizures typically bring us out of a sound sleep.

Some dogs recover from a seizure better with no stimulation, so their owners turn off the lights, television and radio, and softly speak to the dog until the episode is over. Luke does better with stimulation. Once he starts seizing, one of us grabs our other dog so he doesn’t step on Luke and accidentally get bit. We hold Luke’s head and loudly call his name.

Once he in conscious, we take him to the backyard so he can get fresh air. The Phenobarbital is given every 12 hours, but after a seizure we give him his dose, plus an extra pill as soon as he can swallow, no matter what time it is. I wouldn’t recommend an owner giving his or her dog extra medication without checking with the vet first. 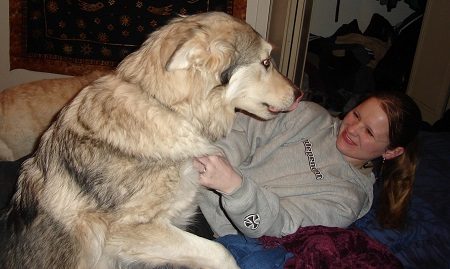 This routine has been fairly effective for us, but if something startles Luke while he’s outside, he will have another seizure. It’s a fine line between keeping him alert without overloading his nervous system.

If Luke’s seizures continue, we immediately take him to his vet or the emergency animal clinic. Dogs that have seizures lasting more than 10 minutes risk significant brain damage, according to the Canine Epilepsy Network, and a catheter may be needed to immediately inject the dog with medication.

After a seizure, dogs are clumsy and usually blind, so they need to be kept away from stairs and sharp objects.

Luke was clumsy for several days following his last episode of cluster seizures. He’s not the same energetic, rambunctious dog I brought home from the shelter, but he is still affectionate and wags his tail. He has many more good days than bad days.
Both of our dogs are 5 years old, but Luke looks and acts much older now. I’m not sure how much time we have with him, so my focus is making everyday comfortable and enjoyable for Luke.

I would be lying if I said our life doesn’t revolve around Luke’s epilepsy. We need to make sure we’re home in time for his medication everyday. There are few people we trust to watch him and we will never kennel him, which has put a stop to any vacations. I worry if Wayne has to go out of town because I can’t carry Luke to the car if he needs to be rushed to the vet.

Despite the sacrifices we have made to keep Luke healthy, they are all worth it as long as his good days continue to outnumber the bad.

For more information on the Canine Epilepsy Network, visit www.canine-epilepsy.net