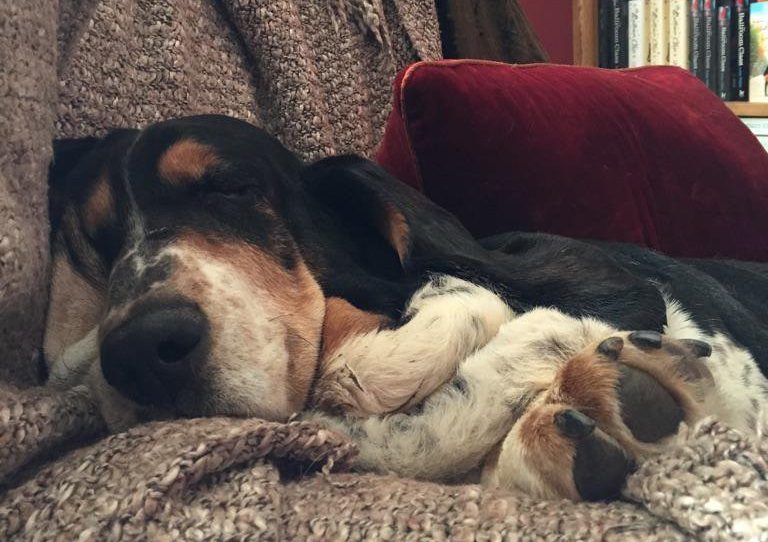 Lucy Dillon is one the UK’s most loved chicklit authors, especially among dog lovers.

With such well-defined canine characters throughout her books, Kim O'Meara caught up with the author to find out more about the dogs who’ve shaped her life and her books, while answering one of the biggest cliff hangers – what happened to Fido in ‘One Small Act of Kindness’ - I admit it, I've just read the book and had to know.

Hi Lucy, thanks for making the time to speak about dogs today. Please tell us about your own dogs.

Hello! At the moment, I just have the one dog in my life - a Border Terrier called Barney, who is technically my step-dog since he belongs to my boyfriend. He’s a typical Terrier: very bouncy, loves a ball, hates cats, and remains convinced he’s responsible for seeing off the postmen/DHL men/any visitors to the house with his ferocious barking.

Sadly, I lost both my Bassets within a few months of each other last summer; it was a shock and I decided to give myself a little time to grieve them properly, but we’re going to adopt a new pup when we’ve moved house, so I’m looking forward to that very much!

No, funnily enough, we were the only ones in my family who didn’t: my cousins variously grew up with a Border Collie, a rough-haired Collie, Cocker Spaniels, Lakeland Terriers and Whippets, but we had a cat called Vienna. I’d have loved a dog, but realistically we just weren’t home enough to give it the attention it would have needed, so retrospectively, Mum and Dad, yes, you were right not to give in to my nagging.

Which of your dogs has had the biggest influence on your life?

Probably my first Basset Hound, Violet. She was the most beautiful creature I’ve ever seen and she taught me how to be a dog owner, simply by being a very easy dog to live with. She was 3 when I adopted her, so well past puppy madness (I doubt Violet was ever very mad, to be honest, she was a duchess), and we coexisted with mutual devotion for the next seven years. I miss her very much, still.

I once read a quote online from someone who said, 'if you like dogs and you like chicklit, read Lucy Dillon'. Was it a conscious decision of yours from your first book to include them with a central role because of your love of dogs?

That’s such a lovely quote! No, it wasn’t intentional at all - in fact, there are no dogs in my first book, ‘The Ballroom Class’, although the main character does have a Yorkshire Terrier, so maybe the idea was planted there!

I decided to write about a rescue shelter when I adopted Violet, partly because I was learning so much about dog ownership (it’s much easier to write about something you’re already interested in) and also because I wanted to explore that relationship between people and dogs, and how it reflected on the characters in the story. I’d met some people involved in rescue and was bowled over by their dedication and compassion; it felt as if they had a hundred different storylines evolving every day - and every one of their dogs had their own story to tell too.

How important do you think dogs are in storytelling to shape a person’s character?

It’s always interesting to explore how people behave towards animals - not just whether they’re compassionate (although who could ever like a romantic hero who wasn’t?!), but whether they’re scared, or dismissive, or intuitive, or codependent.

Which character in your books do you think has most benefited from having a canine sidekick?

Rachel, in ‘Lost Dogs and Lonely Hearts’, is someone who has lived quite a self-absorbed existence up to the point when she inherits Four Oaks Rescue, and learning to fit a dog’s requirements into that life teaches her a lot about herself, from better time management, to clearer communication, to allowing another creature to form an emotional bond that might require her to give up something of herself in return.

In ‘A Hundred Pieces of Me’, the heroine Gina has been through so much that she’s lost her sense of joy in life; she ends up adopting a Greyhound who has also been broken by circumstances, but together they slowly rediscover what it means to stretch out emotionally and find pleasure in the moment - Gina by falling in love again, and Buzz by running for pure exhilaration. I cried so much writing the final scenes. I still cry now reading them!

Of the dogs featured in your books, which is your favourite character and why?

I loved Gem in ‘Lost Dogs and Lonely Hearts’, because he’s that archetypal wise Border Collie - the cleverest dogs of all, with sharp eyes that see everything and a brain that never stops ticking - and writing Bumble and Bee, the two Pugs in ‘All I Ever Wanted’, was also very emotional.

Somehow, without quite knowing exactly what they’re doing, they help a little girl with selective mutism to communicate again, through their own non-verbal communication skills.

But Buzz, I think, will always have my heart; researching the Greyhound rescues for that book opened my eyes to just how badly some are treated but also how amazing the rescue charities are in trying to find them new lives. Hats off to Forever Hounds and all the other sighthound charities.

Do you think your readers have a favourite dog?

The dog I get most emails about is by far and away Lord Bob the Basset in ‘One Small Act of Kindness’. I have a soft spot for Lord Bob because he was based on my younger Basset Hound, Bonham, who was magnificent and somewhat unreliable, but very charismatic.

Lord Bob is a real pain at home, stealing food, climbing up on sofas, making terrible smells, but he’s a Pets as Therapy dog at the local hospital where he’s treated like a celebrity and is, of course, the model of exemplary behaviour to his legions of fans. Just not to his long-suffering humans at home.

Violet, pictured above awake and looking ahead, with Bonham asleep in front

Talking of Lord Bob and ‘One Small Act of Kindness’, the book ends on a cliff hanger about the other canine character, Fido. Can you tell us how the story ends for her?

Oh, I get so many queries about Fido and I feel terrible (and a bit stupid) every time - of course, she’s fine. I can’t believe I didn’t make it clearer. It often happens at the end of a story - I have such a vivid sense in my own mind of how it’s all tying up, that there’s always one thing I forget to write down. In this case, it was that Fido was absolutely safe in the magic hands of George Fenwick, the vet from ‘Lost Dogs and Lonely Hearts’ (and others!). I suppose that’s the good thing about writing stories set in the same place; I can drop hints in future books about how life’s going on for old friends.

Dogs’ capacity for trust and forgiveness puts humans to shame. They are very straightforward and simple in their needs and don’t lie or cheat, or post selfies with filters on to make their ears look cuter.

Finish the following sentence, my dog is…the reason I go walking in the rain.

And one final question, if you could ask Barney one question and one question only, what would you ask him and what do you think he’d say?

Ha! I would ask Barney what I could do to make him spiritually and emotionally satisfied for the rest of his life, and Barney would probably say, 'more tennis balls'.

Thanks Lucy! Having just read 'One Small Act of Kindness' I can't wait to binge on the others! Keep up to date with Lucy's news and new releases on www.lucydillon.co.uk

[Originally published September, 2017]
In this article: