For many years, dominance theory and the alpha dog concept has been used to explain dog behaviour.

This theory basically says that dogs have a very linear pack structure, with the alpha dog, or pack leader, at the top of the hierarchy and all other pack members below them, like rungs on a ladder. 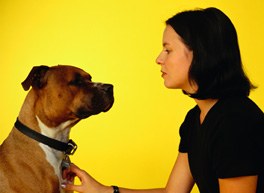 Each dog's behaviour, particularly any aggressive behaviour, can be explained by their efforts to move higher on the ladder, and push other dogs into a lower, subordinate position. Dogs that have a higher position in the pack eat before lower pack members, and are more likely to breed.

Followers of the alpha dog concept believe that you need to be the pack leader, or alpha dog, in your home because if you don't, your dog will. This will result in your dog not doing as he is told, and perhaps even growling at you when you ask him to do something.

The source of the alpha dog theory came from observing captive wolf packs – individual wolves were taken from a number of zoos and combined to form a new wolf pack. These wolves were adults, and certainly had to stand up for themselves amongst the others, and they developed a hierarchal structure to allow them to live in harmony.

It is a totally artificial way of housing wolves, and doesn't demonstrate natural wolf behaviour.

Alpha dog behaviours don't occur in a wild wolf pack, because there isn't usually a specific alpha wolf. There is no aggression between adult pairs, and when the youngsters are old enough to want to take charge, they move off to establish their own family group. Captive wolf packs don't have the ability to move away, so they have to stay where they are, bickering and squabbling for position.

There are many things wrong with this concept when it is applied to our pet dogs. We can't compare domestic dogs who evolved as scavengers, with wolves who were hunters and predators, and even less so with captive wolves living in artificial packs in un-natural environments.

Unfortunately, some people believe that to effectively be their dog's master, they have to demonstrate their dominance with techniques such as the “alpha roll” - forcing their dog into a subordinate position on their back.

The dominance/alpha dog theory of dog behaviour usually results in coercive training methods, and are often based on punishment. It does nothing to build a rapport and partnership between dog and owner, and can in fact permanently damage their relationship.

Does this mean that dogs don't use dominance in their interactions with each other? Not at all. Dogs, like people, have different personalities, and some are more assertive than others. Dominance can be used to describe the interaction between two individual dogs, which evolves over time.

As they meet each other again and again, for example at the dog park, they develop a pattern of interaction where one dog is more assertive, and the other is happier yielding to their bossier playmate. This means that if dogs are well socialized, and allowed to work out their own relationships, dog fights and aggressive behaviours are very unlikely.

The American Veterinary Society of Animal behaviour has released a policy statement which states that the concept of a dominance-based, alpha dog hierarchy is wrong, and should not be a basis for our interaction with our canine companions. Their sentiment is echoed by a wide variety of other dog training organisations in the UK.