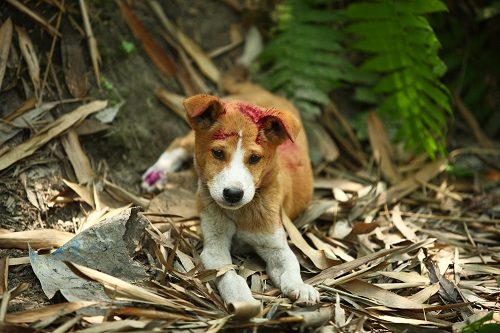 The most common method of killing dogs during these culls was to poison them with strychnine. Death by strychnine is slow and agonising, and as animal lovers reading this you are no doubt feeling the pain of those who have suffered previously. The chemical acts on the dog’s nervous system, resulting in painful muscle contractions and convulsions. In some rural areas, dogs suspected of having rabies could be beaten to death by villagers, in an effort to protect their communities against the disease, says Ellie Parravani.

The inhumane practice of culling dogs carried on in the country for decades. However, after lobbying by World Animal Protection and other animal welfare organisations, the government realised that their current efforts were fruitless. The dog population was not decreasing –and neither were cases of rabies.

In 2011, Bangladesh’s government drew up a strategy to eliminate rabies by the year 2020. Instead of culling, the ministry noted that vaccinating dogs against rabies was the way forward.

Studies show that by vaccinating 70% of dogs in an area against rabies, the disease can be successfully controlled in both dogs and humans. Vaccinating dogs also saves a lot of money, as treatment for rabies is costly – and so is repeated culling of dogs.

Vaccinating Bangladesh’s dog population is no mean feat, as some estimates suggest there are around 1.2 million dogs in the country. Dog ownership in towns and cities is rare, and many dogs are left to roam freely and fend for themselves. In some rural areas, dogs are looked after by the whole community.

Three years ago Abu Sayem trained as an animal handler and then worked across the country training local dog handlers on how to be as quick and gentle with the dogs to vaccinate avoiding stress and fear.

World Animal Protection supported the government in starting the programme by training up government staff and implementing a pilot vaccination programme in the tourist resort of Cox’s Bazaar. Staff who used to kill dogs for a living were trained up to be friendly dog handlers. They were trained to catch dogs as quickly and quietly as possible, so that dogs don’t get stressed or scared. Now Bangladesh’s dog handlers are so proficient at their job, they are able to catch dogs with just their hands without using any equipment.

Since the pilot project in Cox’s Bazaar, World Animal Protection has worked with the government of Bangladesh to vaccinate nearly 200,000 dogs, and the current statistics are already proving that this is the way forward, as human rabies deaths are rapidly falling. The organisation has secured agreements with many local governments that dog culling will not form a part of rabies control in their areas, meaning no dog will suffer a painful death in the name of rabies.

Local resident Kaosar Mondol tells us that “by vaccinating dogs against rabies, dogs can live with us as friends.”

During a recent vaccination drive, the team met eleven-year old Mohamad Bipul who lives with his large family of four brothers and three sisters, in a quiet rural village of Bangladesh, which is surrounded by paddy fields. Only a few people keep their dogs close, but the villagers are very affectionate and treat them as pets.

Rabies isn’t widespread in the area but the community is very wary of it because they have had cases of rabies in the past and they know how dangerous being bitten can be. Previously they have had no choice but to kill suspected rabid dogs, but now they are becoming more aware of a new way to combat the disease.

When we approached Mohamad Bipul, he proudly introduced us to Raja, his four-month old black and white puppy. He said he wanted Raja to be safe, his older brother told him that when a dog is vaccinated against rabies, it keeps him healthy. The little boy helped the team catch Raja so he could be vaccinated and marked with non-toxic paint for everyone in the village to see that Raja is a very healthy and happy puppy. Once vaccinated he couldn't wait to be released to go play with his young owner.

Mohamad Bipul tells us that Raja protects his family’s house and that everyone at home loves Raja and pets him. They look after the dog really well and feed him rice, lentils and biscuits. Even if allowed in the house, Raja prefers to stay with the cows in the barn at night.

Life for Bangladesh’s dogs is getting better and better. They are not threatened by an inhumane death anymore, and in turn are less threatening to the communities around them.

The next step will be to make sure dogs and humans continue to live a harmonious co-existence in Bangladesh, and to eliminate other conflicts they may experience in the communities they live in.

Puppies bring joy. Worrying about which food is best for puppy when they land in your home can be stressful. Never fear. Our puppy...

Ali Bastian, Molly and Mable Discover How Pet Friendly West Sussex Can Be

TV actress and dog lover, Ali Bastian has joined the K9 Magazine pack as our new pet friendly travel reporter. Alongside her two sidekicks, Molly and...

Have you ever wondered what dogs can achieve?We have dogs that can detect cancer, earthquakes, even bombs and the role they play in our lives...

Celebrity photographer Raquel Rischard made the move from starring in front of the camera to fulfil her true passion behind the lens. She now...