If you’re one of the lucky people who has recently acquired or are thinking of getting a new puppy, congratulations! You’ve done your homework, selected the breed that’s right for you and best matches your lifestyle. So now it’s the job of K9 Magazine’s puppy series to help you set your young bundle of fun on the path to becoming a perfect canine companion. 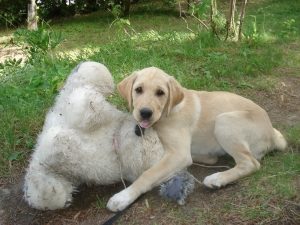 7) Try to make sure your puppy is entertained adequately for short but regular intervals during the day. Long periods of being left un-stimulated may lead to destructive or disruptive behaviour later in life. Little games playing ‘fetch’ with the pup’s favourite toy will have the beneficial affect of stimulating the pup, increasing his or her bond with you and allowing the pup to expend short, sharp bursts of energy.

6) Don’t over-train your puppy. Remember, a one-year old dog is, effectively, the same as a seven-year old person. It is a good rule of thumb to keep reminding yourself ‘would I expect a three, four, five or six-year old child to accomplish some of the tasks I am asking of my pup?’ Manners, house-cleanliness and the very basics (including socialisation) are all you should really seek to instil in your puppy until such a time, as they are mature enough to undergo a more formal training regime. Puppies can deceive you into thinking they are ready for training but will ultimately ‘rebel’ against discipline as they get older. Ensuring you have taught your puppy to respond to his or her name, what is and is not acceptable in terms of house-manners and establishing an uninhibited relationship with your pup is more important than any other discipline in the early stages of any dog’s life.

5) OWWWW! Teach your puppy that biting or nipping is not a pleasant experience for you by reacting as if in pain to their playful nips. Rather than scold the dog, let him or her know that nipping is not a pastime that you wish to engage in. Letting out an over-exaggerated expression of pain will more than likely shock the puppy into ceasing this behaviour. You will be glad you put an end to this behaviour early on instead of confronting a ‘playful’ 2-year-old with a full set of adult teeth!

4) Decide early on what is and is not acceptable in your house. If you don’t want your pup to use the living-room sofa as a raised dog bed when they get older then don’t encourage him or her to come up for fuss when they’re young just because they look sweetly at you and are small enough to pick up.

3) Jumping up. All puppies love to jump out when greeting anyone. Rather than reprimand the pup, simply ignore the behaviour and wait until he or she settles down and is not jumping up before lavishing any attention on them. Above all else, don’t encourage the behaviour by patting or praising the dog when they are in the ‘jump-position’ or you may run in to problems as the dog gets bigger and views jumping up as an easy way to receive attention.

2) The puppy’s name will be with them for life, make sure they know it by associating it with all things pleasant and fun. In the same way dog’s cotton on in a very positive way to words such as ‘walkies’, ‘biscuits’ or ‘dinner-time’ they should be given the same association with their own name. Too often the only time the puppy hears his or her name is when they have done something naughty. ‘Jasper, stop doing that!’ ‘Buster, leave that alone!’ It’s tough but try to ensure that you NEVER use the puppy’s name in a negative scenario only positive ones. Instead of ‘Jasper, leave that alone!’ simply, ‘Leave that alone!’ or better yet ‘No!’. And instead of ‘walkies’, biscuits or ‘dinner-time’ try ‘Jasper, biscuits!’, ‘Jasper, walkies!’, ‘Jasper, dinner-time!’ Golden rule. Your puppy should associate his or her own name with all that is pleasant and fun and nothing that is negative. The word ‘no’ is negative and it is enough to cover all undesirable behaviour.

1) From the moment your puppy comes into your life teach him that coming to you when called is nothing short of being the best thing in the world. Puppies can’t resist humans who sit down on the floor with legs spread apart so, while they’re easily persuaded to come by this very simple gesture, make the most of it by using their name, sparingly, but making a huge fuss when puppy arrives. Try it at times when pup is pre-occupied with something interesting and make coming back to you the most enjoyable and rewarding experience in the world for him or her. You will really see the benefits as the dog gets older. 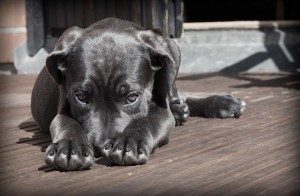 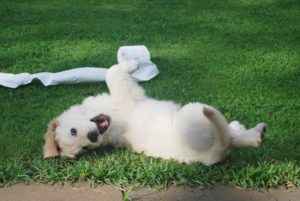 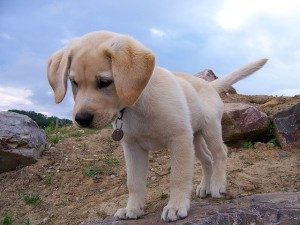 Training – The Early Years to ‘Terrible Teens’ & Beyond