We have lived with dogs for over 14,000 years, writes Simon Foden. As pets, protectors, farm hands, hunters and transport, but without dogs, the inspiration to change the world, the courage to fight and win battles and the people who made the most difference would have been missing. Read on and be amazed at just how many times the humble dog has lent his paw to the development of the human race. 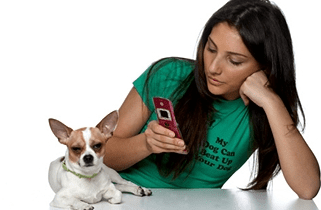 In a world without dogs…. would we have telephones?

Alexander Bell, long before he decided to add the name Graham into the mix, found fascination with the noises that emanated from the mouth of his family’s pet dogs. He would sit for hours, pressing his hand against the chest and throat of the dogs, whilst encouraging them to bark and growl. It was at this formative juncture in his life that he became obsessive about the relationship between sound and vibrations.

The young inventor moved to Boston, Massachusetts and with the help of a financial backer and his close friend Watson, he started work on developing the idea of the telegraph machine that could send multiple messages.

Still fascinated with the idea of transporting sounds as vibrations, he and Watson abandoned their initial plans and focussed on the idea of the telephone. One hot night in 1875, Bell communicated the following message to Watson via his device. “Watson, come over here, I need you” and the telephone was invented. But had Bell not grew up with pet dogs, would his interest in sound and vibration have been ignited?

In a world without dogs…. would Europeans have colonised the Americas?

Dogs have been endemic on the continents of North America and South America for thousands of years, many dogs had their homes in Indian settlements. But when the conquistadors arrived from Spain, the dogs they brought with them were not mere companions, but warriors. Bloodhounds were employed by the Spaniards to chase and capture any escaping natives as they began the process of colonising the newly found land. It was at this time that the idea of purebred dogs was introduced.

If the invaders had not had their dogs, it is believed that the Indians would have had a greater chance of defending themselves, and thus preventing America from being taken over by Europeans.

In a world without dogs…. would man have walked on the moon in 1969?

On July 21st 1969, Neil Armstrong became the first man to set foot on the moon. Eight years prior to this, Russia put Yuri Gagarin into space, making him the first human ever to do so. But this ‘giant leap for mankind’ could not have happened had it not been for Laika, the stray dog from Moscow who holds the title of being the first ever living thing to enter space, having been blasted into orbit on November 2nd 1957 she lead the human race into a new era of space travel.

In a world without dogs… would we all be speaking German?

The Second World War was one of the biggest turning points in the history of mankind. Had Hitler won, no doubt he would have executed all of his plans. This means as a nation we would now all be talking German, provided our Grandparents hadn’t been killed.

The red army trained and used over 50,000 dogs. A man lost in the middle of a Russian winter would simply perish, a wounded man would perish twice as fast, but the secret weapon that the Russians had up their sleeves, enabled them to locate and rescue many soldiers who would have otherwise died. Meaning that the conditions didn’t deplete their numbers as they travelled across to Germany, whilst the Nazi war machine ground to a halt coming in the opposite direction, leaving Hitler prone to capture.

During one battle, near the town of Duminichi, a German shepherd named Bob, located sixteen wounded men, who had crawled into the trenches. Bob, like all of the Red Army dogs would lay down beside a wounded man offering warmth, until he took some dressing from a medical kit strap on the dog's back.

A team of sled dogs in five weeks, carried 1,239 wounded men from the battlefield and hauled 327 tons of ammunition to where it was needed. White Samoyeds were used to pull Russian soldiers, dressed in white, behind enemy lines. Had the Russians been unable to penetrate their own unforgiving climate and conditions, the war could have taken a very different turn.

In a world without dogs… would we have fresh milk, wine or beer?

Louie Pasteur, the man responsible identifying the link between bacteria and disease, changed the world. Using a rabid dog in his experiments, Pasteur was able to find a cure for Rabies, which lead him to such fame and high regard that a public fund raising exercise enabled him to open the Pasteur Institute, a clinic for the research into infectious diseases. Also at the clinic, the process of pasteurisation for removing bacteria from perishable foods, methods for preserving wine and beer have all been developed.

In a world without dogs…. would we have Velcro?

One day in the summer of 1948, George De Mestral an amateur Swiss mountaineer took his dog for a nature hike. Upon returning, he noticed that his dog was covered in burrs, little plant seeds that stick to anything furry. Rather than combing the dog, he fetched his telescope and examined how the burrs were attaching themselves to his dog’s coat.

Upon realising the burrs had hooks and the fur formed a loop, he began to develop an idea of his own. Following a period of trial and error, the mountaineer turned inventor patented his design which now forms a multi billion dollar industry with over sixty million yards of Velcro produced each year.

K9 Magazine has been finding out how regular dog owners the world over imagine a world without dogs to be.

Leslie Darney, from Woodbridge, New Jersey, explained how her life would have turned out very differently if dogs hadn’t existed. “My husband passed away in February 2004 after a long illness. I went into a black hole of despair and depression, I was close to suicide and suddenly my life changed. My brother was taken ill, and I was the only person he trusted to care of his beloved Jack Russell. Clearly feeling lost and lonely, Muffin relied on me for comfort. For the first time since my husband’s death, I felt like I had a purpose for living and I dedicated my time to looking after Muffin, with whom I fell in love with. I am now a lot happier and have two Labradors of my own”

Julia James, from Ontario explained how her life would be without dogs. “I met my husband Roy because of my Black Labrador, Charlie. I had been walking Charlie in the woods and he was all muddy. On the way home, I tied him up outside a shop for a second whilst I went in. When I was in there I heard a man’s voice say ‘oh look at that you mucky boy’. I ran out and saw Roy standing there with mud all over his shirt. Charlie had jumped up to say hi to Roy, who was petting him, and he got him filthy. If Charlie hadn’t been so friendly, Roy could have walked right past and I would never have met him”