It’s often said that travel is good for the soul. It gives us a chance to expand our horizons, absorb new surroundings and recharge mentally and physically. With such easy access by land, sea and of course, sky, European cities lure millions of people from the UK every year.

In October we shared travel writer Paul Wojnicki’s latest European adventure with his family and their nine-year-old Jack Russell, Falco. We left the family in Strasbourg, France as they prepared to head towards Fussen, a small town situated in the Bavarian Alps on Germany’s border with Austria. 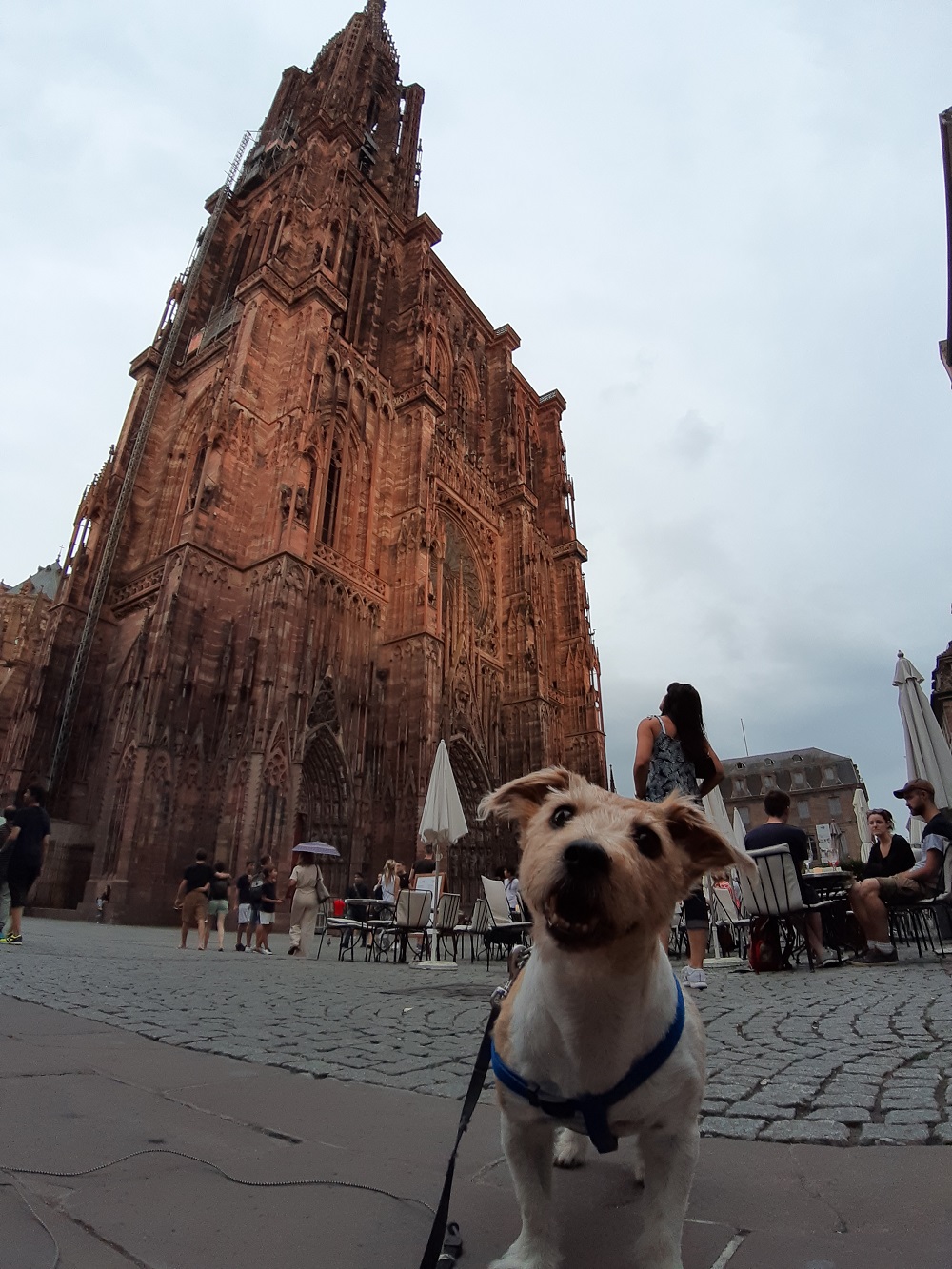 Here’s Paul to share the next leg of their trip.

After a cultural couple of days in Strasbourg, checking out the European institutions that Britain is about to leave behind, we hop in the car and make the three-hour drive to Fussen; a small Bavarian town situated on Germany’s border with Austria, approximately an hour’s drive from Innsbruck in Austria.

The most visited attraction in these parts is the world-famous Neuschwanstein Castle - said to be the template for Walt Disney’s castle - and it’s this fairy tale attraction that brings over 1.5 million visitors each year, many of which are day-trippers bussed in from further afield.

Neuschwanstein Castle is just one reason to visit this region if you love the great outdoors, and particularly if you have a four-legged friend in tow.

Baumkronenweg Ziegelwies is a novel collection of swing bridges strung between the trees, with views of the Bavarian Alps in every direction.

Falco is a little unsure at first as he’s never been fond of bridges with gaps in them, but he soon gets used to it, and besides it only takes five minutes or so to cross. 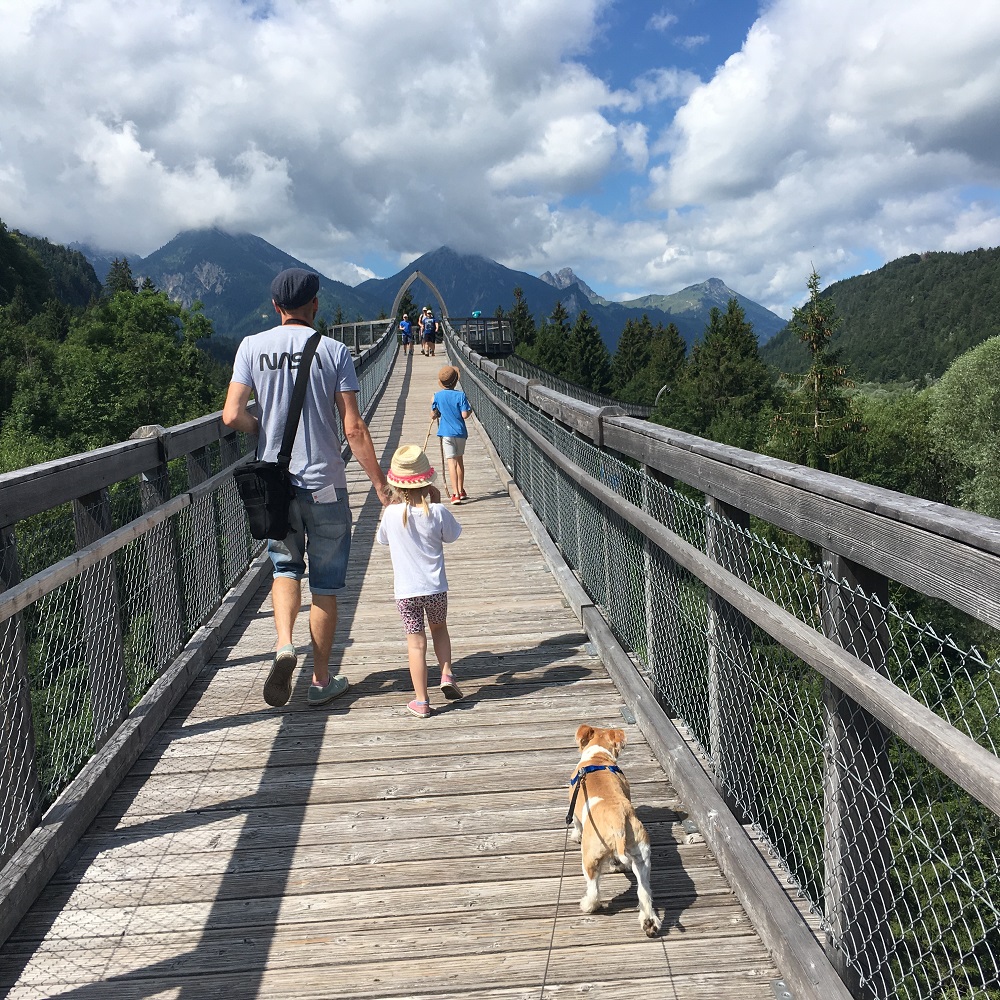 He’s happier at the ground level of the Baumkronenweg Ziegelwies where marked trails wind through the woods along the river to a narrow gorge with water rushing through in a beautiful waterfall. It’s unbelievably scenic, but also a little worrying when you’ve got a swimming maniac for a dog.

“No Falco!”, I have to tell him several dozen times as he tugs toward the rushing waters.

Turning back, we follow the trails further away from the river, where a series of eco-friendly obstacles have been set up for children, and a few streams are deep enough for Falco to safely swim in. It’s a really nice side trip, just a couple of miles from Fussen, and it only costs 5 Euros per adult, with the children and Falco being free.

Next, we head first to the nearby Tegelberg mountain, whose high-speed cable car is a breath-taking way of reaching the top, though admittedly not as breath-taking as actually walking up the mountain would be. At the foot of the mountain, a constant stream of paragliders seem to be coming in to land, before re-packing their chutes into a carry on tote bag for another ascent up the cable car.

Despite my fear of heights, the kids manage to talk me into a cable car ride, which is worth it for the stunning view of Neuschwanstein Castle alone, let alone the views of the Alps, the surrounding lakes, forests, river and countless paragliders soaring like eagles around us.

Again, dogs are more than welcome, and we’re accompanied by another two in our cable car; who Falco is only too keen to say hello to.

The views from the summit are amazing and we get to watch the paragliders launching themselves headlong from the mountain one after another.

Taking the last cable car down we decide to revisit Neuschwanstein Castle now that the day-trippers have all left on their coaches. 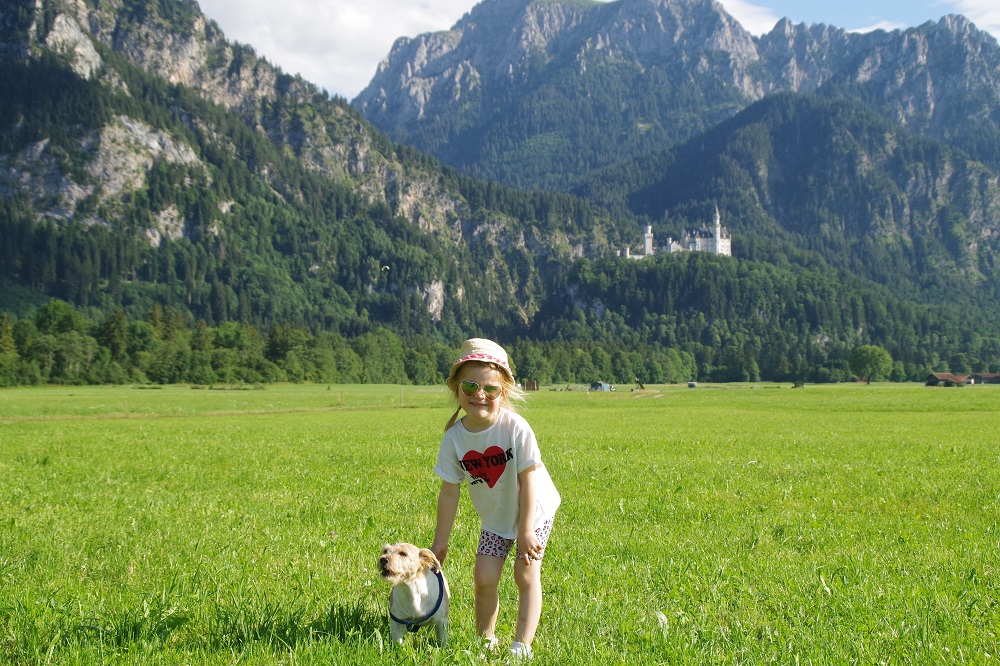 The village of Hohenschwangau at the foot of the mountain is all but empty and it’s only seven o’clock in the evening. It takes us around 40 minutes to climb the road that leads to the famous Marienbrucke, or Marian’s Bridge, which is even more stunning (and admittedly a little terrifying) than the Baumkronenweg Ziegelwies on the border.

It’s easy to see why this particular spot is consistently rated as the best view of Neuschwanstein Castle. There’s only ourselves and two well-equipped photographers on the bridge when we get there and it feels really special. 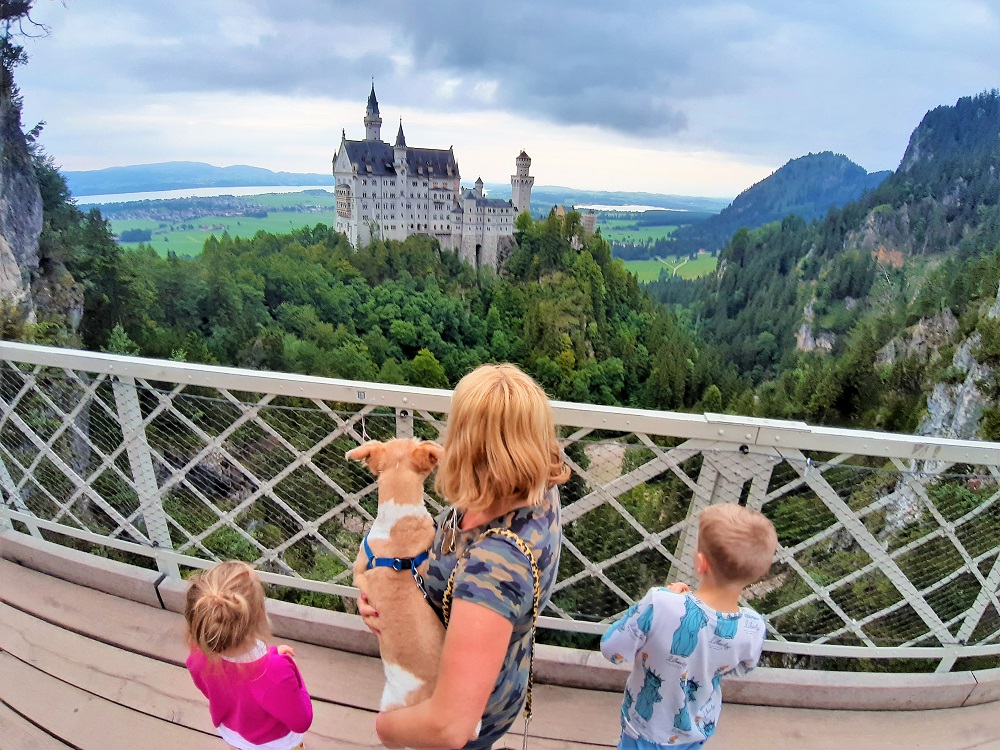 The last time we were on this bridge it was midday and like a rugby scrum and uncomfortable enough for us, let alone Falco. The wooden boards that hold you (and up to 399 other people at a time) 90 meters above the river, were literally bowing with the weight. Now that we’re alone we have an unobstructed view of the castle, and it’s probably the best view we’ve had so far.

The walk back down, as dusk falls is almost as romantic, with the village and castle of Hohenschwangau twinkling with fairy tale lights. 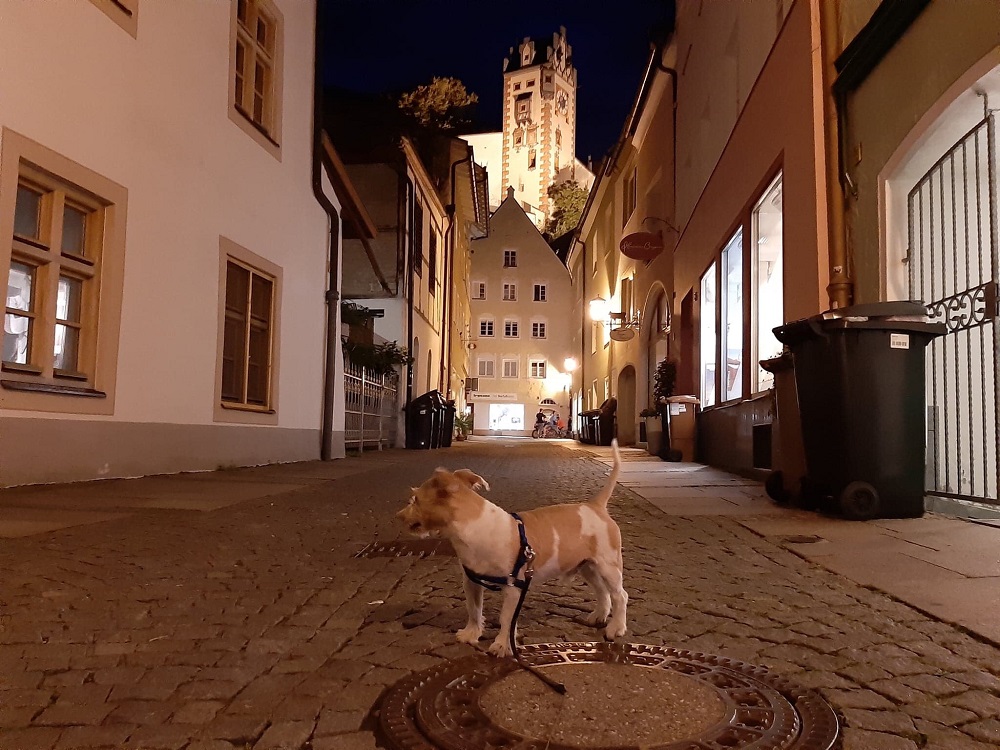 The following morning we’re up early enjoying our buffet at the Best Western and then heading straight for the Alpsee, a stunningly clear lake just steps away from the bus stop for Neuschwanstein Castle.

Amazingly only a handful of visitors bother with the lake and we virtually have it to ourselves when we arrive. The lake remains unused by 95% of the people we see being bussed in so we have no trouble finding a spot for Falco to dip his paws in, unimpeded by fellow tourists, and when we hire a pedalo later in the day, we’re virtually the only people admiring the two world-class castles and the Alps from the water. 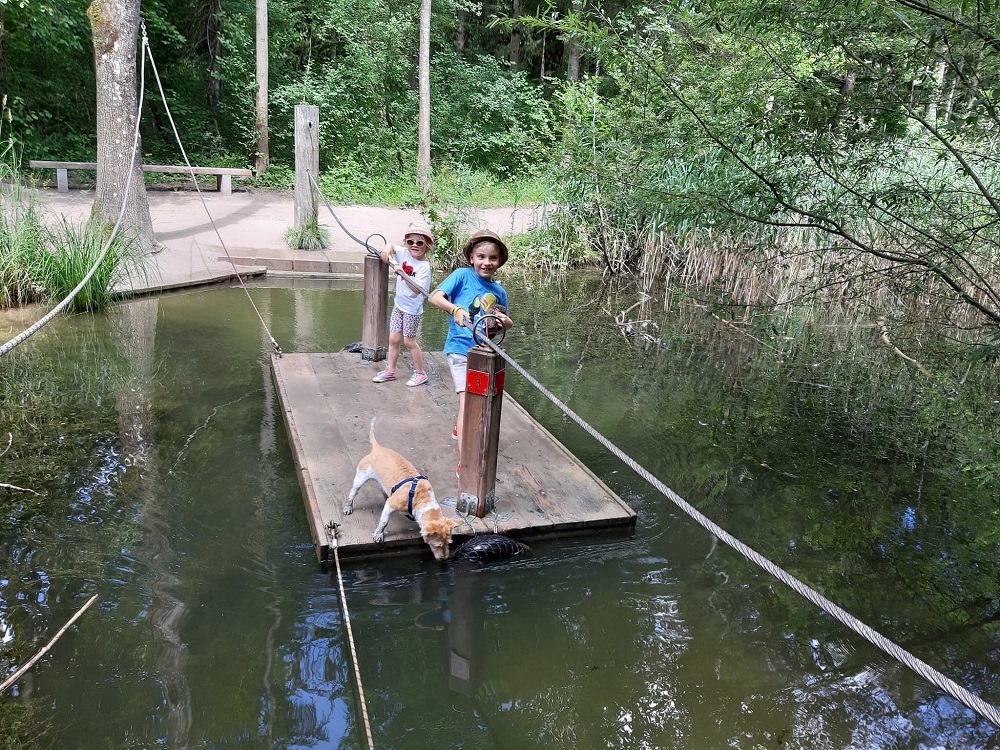 Practicalities of Visiting Fussen With Dogs

There is no shortage of accommodation in the region but Fussen is the best place to stay thanks to its abundance of restaurants, cafes and shops.

The Best Western has family rooms and accepts dogs. The medieval centre is extremely compact and easily navigated on foot. There is also another castle in the centre of Fussen along with a former abbey.

There are enough attractions to occupy outdoors enthusiasts in Fussen for weeks.

Families with dogs are particularly well catered for and most of the attractions are dog friendly and inexpensive.

The treetop walk between Austria and Germany only cost 5 Euros per adult (children, including teens, and dogs were free). Other dog friendly attractions we enjoyed in the area included paddle boarding, boat trips, hiking and swimming. Skiing and ice skating are also popular in winter.