Returning The West Highland White Terrier To Its Natural Habitat

This is the account of how one woman undertook a journey to take her dog back to its Scottish roots. Would 'Jock' be at home in his Highland heritage environment?

“I’ve taken a cottage in Achiltibuie, Wester Ross, for three weeks,” announced my younger son at the other end of the telephone. “Thought you might like to join me and bring Jock. He would be returning to his place of origin, wouldn’t he?” Yes he would, I mused to myself later, after accepting this welcome invitation. But how would Jock cope with such an environment? I could feel a project coming on, writes Elizabeth Everill.

Jock, a West Highland White terrier, first came into my life as a puppy in 1997, when his owners were going on holiday. Over the subsequent years he came to me regularly, and a bond, stronger than any experienced with the working spaniels I had owned in the past, was formed. 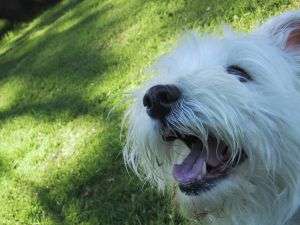 Jock, having been brought up as an urban dog, with nothing more being asked of him other than walking sedately to the local park and being a good house dog, had been trained well. This discipline stood him in good stead for living with us but the rural life added another dimension – freedom to express his intelligence and his natural joie de vivre.

Finally, in 2002, when Jock’s owners were moving house for the third time, Jock came to stay permanently.

I first took note of the West Highland White terrier when one vied for top rating with the actor, Robert Carlyle, in the BBC’s 1994 major drama series, ‘Hamish Macbeth’ set in the North West Highlands. Since then we’ve witnessed the deserved rise of Carlyle and the growing popularity throughout the world of this indomitable breed.

2005 sees the centenary of the founding of the West Highland White terrier. In the authoratitive book, ‘Stonehenge and the Dog’, published in 1887, there is no mention of the breed, only its ancestors, the Skye terrier and the Scottish terrier, both of which were kept as sporting dogs in the Western Highlands of Scotland, unsurpassed in their tenacity at hunting rats, rabbits, foxes and badgers. Towards the end of the 19th C., Colonel E.D.Malcolm of Poltalloch, Argyll, worked Scottish and Cairn terriers on his estate, and there gradually evolved a brown, beige or white dog he called the Poltalloch terrier. Previously, on working estates, any white puppies in a litter were considered weaklings and despatched, but the story goes that some of the dark coloured dogs were shot as they worked the under-growth in mistaken identity for vermin. So the white dogs became recognised as useful

In tandem with the evolvement of the Poltalloch terrier was the Roseneath terrier. This dog’s breeding came from the original Skye terrier, not the one we see to-day in shows, but the one worked in ancient times on the remote Western Isles. The Roseneath had evolved as white in colour and was considered an admirable pet.

In the book, ‘The West Highland White Terrier’ by D. Mary Dennis and Catherine Owen, research found that ships of the Spanish Armada, wrecked off the Western Isles’ had carried small white dogs to catch rats. It was, perhaps, the descendants of these found in Argyllshire in the 17th C. that prompted the Scottish King James I of England to send a present of ‘six little white ‘earth ‘ dogs to the King of France’.

Whatever the origin of the Westie, Mary Dennis suggests that in naming it the West Highland White terrier, a compromise was reached to include all the white dogs of the West Highlands. But , certainly, Colonel Malcolm of Poltalloch is credited with the development of the modern breed, leading to the first clubs in England and Scotland being formed in 1905.

With only 5 months to go before our departure for Achiltibuie, I set about planning a training schedule for Jock. The terrain of north west Scotland is vastly different from that of Wiltshire where we live. Anyone who has spent a day walking over heather, bog and rock, will testify to the required fitness. Jock was no exception and neither was I Early mornings were devoted to a mile walk on a private road with no traffic. The macadamed surface hardened his paw pads and kept his toe nails in trim. In the afternoons there were two or three mile hikes across Salisbury Plain, where the long tufted grass set challenges to Jock’s muscles.

We observed closely for any signs of fatigue, which could indicate a health hazard. There never were; indeed, Jock seemed livelier on his return by his racing round the garden, nosing his football with a skill that outshone George Best’s talent.

Within weeks, Jock’s little body was rock hard, but we maintained the regime. A month before our departure he had an M.O.T. with the vet. Heart,ears, eyes, teeth, coat were checked and he was pronounced fit.
“One word of warning”, said the vet, quite intrigued by the project, “the Highlands are thick with ticks and you already know that Jock has suffered infection from one of these in the past.”

He parted Jock’s hair at the neck and administered one drop of ‘Frontline’ from the phial. “Repeat this just before you go,” he advised. “ Should any ticks get into the skin, they will die pretty quickly, but keep checking.”
He was right. Two days after being in the heather, Jock had four ticks gorging on his blood, but they soon shrivelled and died.

An hour before we set off, to drive through the night, we gave Jock a prescribed tranquilizer and he slept for most of the 700 miles, but as he took so long to recover from the pill, we never repeated it. We took it in turns to drive, stopping every 3 of the 14 hours, to offer Jock water and the chance to relieve himself.

Achduart Cottage has an idyllic setting amidst moor and mountain, with the sea of Loch Broom lapping 50 yards from the door. Jock was speedily launched into this environment, but he took to it cautiously, even after the effects of the tranquilizer had worn off.

Negotiating the thick heather and bracken slowed him down and the pools and bog puzzled him. Strangely enough the rocky seashore proved no problem, for, once he had picked up the scent of a family of pine martens which scavenged there, his inexperience was forgotten. The afternoons were tougher when we crossed the moors, but after ten days, Jock was bounding through the heather, wading pools and leaping from rocks with an aptitude of which Colonel Malcolm would have been proud.

One day, on the lower slopes of Ben More Coigach, a pair of Golden eagles appeared above us, wheeling and soaring. With his white coat against the landscape, Jock was an easy target, and I decided to retreat with him, while my son continued to climb to the summit. Later, we found a sheep’s body torn to shreds.

The weather in Wester Ross can change in minutes and, although wet days were few, there were frequent gales bowling one over. Because of these we avoided precipitous areas, where Jock would have stood no chance. Half way through our stay, I introduced Jock to smaller hills, still steep and rocky, but not dangerous. He stuck close to me, sometimes moving a little way ahead, especially on the steepest parts, as if he were giving me encouragement, but mostly we climbed in tandem, which was thrilling.

On Jock’s first meeting with sheep, there was a stand-off, with Jock and the flock leader daring each other to move. Fearing future problems if the sheep backed down, I called Jock in and he came reluctantly, having lost face.

Among some sand dunes we discovered huge burrows at the entrance to which were fish bones signifying otters. The early West Highland White terrier was often used to flush out otters, which Jock promptly demonstrated by pushing his head well into the burrow or holt. Otters, however, being a protected species, we had to interrupt Jock’s fascination.

Three weeks flew by. As I walked Jock down towards the shore on the last morning, he nosed his way confidently through the heather and bracken, leaping the burn in his stride. No longer urban, but joyfully he had acquired the ancient skills from, perhaps, some far distant dream.

Elizabeth Everill, a graduate of Edinburgh University, spent much of her young adult life in the Middle East and Malaysia. She is an artist and writer, but has owned and trained gun dogs for some considerable years. Married, with two sons, she lives with her husband in Wiltshire.