K9 Magazine contributor and columnist Mike Deathe is a well respected animal trainer and behaviourist. He recently attended a seminar conducted by Dr. Ian Dunbar and has since redefined his entire approach to dog training. This feature is the second of three parts and details just how influential that seminar was on Mike Deathe.

As you can see in the example from the previous issue of K9 Magazine, by the time the child grows up and buys his/her own home, the behaviour of cleaning has become reliable, right? 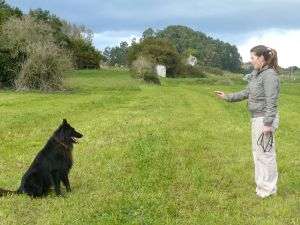 Well, this is the main reason for coming up with the 1-2-3-4 method. Over the last 25 years, Dr Dunbar had noticed that training (while becoming much more kind and gentle) with such dependence on luring and rewarding, was actually killing the reliability of behaviours.

While in the prior history of dog training, before positive reinforcement training, reliability might initially be stronger with the positive punishment methods, many of those dogs fell into learned helplessness due to the use of only those punishments. Remember the previous discussions on the extremes? Hopefully some of you are thinking HMMMMMMMMMMM?

Once again, the answer lies with the words punishment and reward. By definition, punishment means anything that decreases the frequency of a behaviour. Likewise, rewards are nothing more than something that increases the frequency of a behaviour. If you decide to follow only one or the other, then here’s a little baseball analogy to put it in perspective…try to hit a fastball with only one half of a baseball bat.

To me that sounds kind of like using your forehead to drive a nail, very painful and not very productive. This, in a matter of speaking, is the bottleneck I previously mentioned.

Positive Reinforcement training relies too much on food (lures and rewards), creating dogs that will only work when they see or smell food. Positive Punishment training uses only punishment, ending up with dogs that just give up. There has to be a middle ground to direct us to the 75% or Promised Land, and there is.

As I sat there in the seminar listening to Dr Dunbar explain the 1-2-3-4 method to teaching; it made me, as a psychology major, attempt to figure out where this idea would fit in learning theory. Then it dawned on me that it not only did not fit into my own mental constructs’ of learning theory it actually redefined it. It was like a splash of cold water in my face when I realised that using only one of the learning theories was now no longer an option.

The time of considering yourself classical, operant or a disciple of Thorndike was really not possible. But maybe, just maybe, combining them could be the answer. What if each of them was just a different way of describing the 1-2-3-4 method all of which should be taken into consideration when training?

Not to make light of Thorndike or the law of effect, but his theory is the broad, base of learning that we all understand at some intrinsic level. Let’s consider it to be the bottom layer, or foundation of a pyramid. We know that all decisions we make, we do out of some sense of survival…gaining pleasure or avoiding pain. In other words, things we like - we do more often and those we dislike - we do less often, if at all. But where do we go from there?

Next up we have Skinner and operant conditioning where we are using a reward to teach a behaviour. Finally we come to Pavlov and Classical Conditioning to associate the behaviour with something positive. Well according to the 1-2-3-4 method we first ask for or name (cue) the behaviour (let’s use “Sit”.) Then we lure a behaviour to teach the dog the “how- to” of the behaviour (for a sit we take a treat and move it over the top of the dog toward the tail…till the butt hits the ground (behaviour).

We then say thank you and give a treat (reward). Over time, the act of sitting on command becomes the reward itself because of the associations of the treat we have used in the past, as well as the “thank you”, other praise and pets.