When dogs become comfortable in their environment, there is a chance that they can become demanding or pushy. Whilst not as serious as aggression or nervousness, pushiness is something that disturb the relationship between an owner and their dog. Allowing a dog to get away with pushiness may lead to dominance issues which could lead on to problems with behaviour, training and socialising.

Read on to discover K9 Magazine’s 8 ways to reverse the role of a demanding dog.

Dominance aggression is a very common form of aggression because of its inherent nature. In order for the human owner to achieve and maintain dominance, he must understand the dog's urges and know how to diffuse them in a positive manner. It is important to note that dominant dogs generally escalate their aggression when physical corrections are administered via leash and collar. Overwhelming physical force has backed many of these dogs down yet often proved to be only a temporary solution.

Management generally consists of learning how not to trigger aggressive responses. If you call your dog and he will not come, leave him alone. If you want to pet him and you call him over with success, you may pet him; otherwise, do not go to him. Praise him only when he responds to your command to come. Do not go to him and stroke him when he will not come to you. Furthermore, remember not to pet him when he comes over, nudging you with his nose, pushing at your arm for some strokes. It is important that you don't acknowledge demanding behaviour in order not to encourage these demanding tendencies. 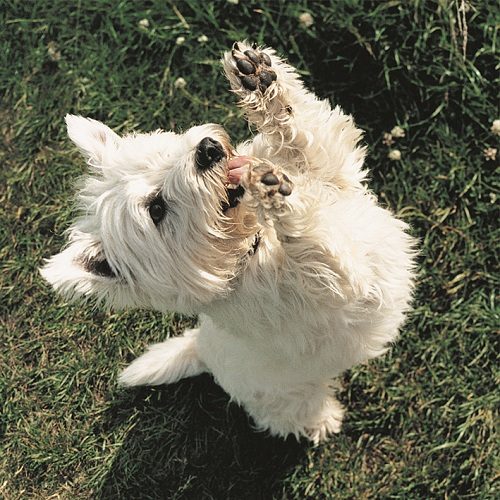 The common areas to recognize and control the hierarchical structure include:

1. Who sleeps in the best spot. The best spot is that area that is considered either most comfortable or closest to the dominant figure in the pack.

2. Who eats first. Survival of the fittest ensures that the strong eat before anyone else. Feed yourself first.

3. Who walks in front. He who is in front is the leader. If you are always following your dog, he is the leader and you are the follower. Commonly, dogs are walked on a lead, and they pull their owners constantly around the neighbourhood. Why would the dog think that the owner is in charge?

4. Who protects the pack. The strong protect the pack. When your dog has a hard time settling down when a visitor arrives at your door, and the barking appears to be somewhat aggressive, the dog assumes that it is his job to inspect and decide who can and who cannot enter his domain. This may be a manifestation of a protection or dominant drive. It is up to you to teach your dog that he is not to be involved in protection issues because you will take care of such problems for him.

5. Who owns the toys. The dog that can control his toys may be inadvertently trained to guard his toys. Leaving his toys around for him to play with at his will may suggest ownership of these toys. It is a good habit to take your dog's toys away when he is not using them and give them to him when you wish to play.

6. Who controls the play time. Dogs will almost throw their toys or balls in your lap in an attempt to elicit play from you. Although this can be a harmless act, it may also be a dominant act as well. Be sure to initiate play on your terms; it is amazing what a dog will do for his owner for a short play session. Use play as a reward for your dog's compliant behaviour.

7. One thing that leads to pushiness in dogs is begging. Allowing a dog to beg or even reinforcing begging can lead to more serious behavioural problems in the future. When you are tired of this behaviour and want to end it, when you get to the point that you can't stand the drooling, the whining, the pawing and the sad eyes staring at you, then you have to steel yourself for the cure. Using the positive approach, give him the command "Down” and have him do a long “Down” by your chair during dinner. Be prepared for many interruptions initially, while you reinforce his “Down.” Each time he gets up, repeat the command and replace it if necessary so that he remains down during your dinner.

With a truly persistent beggar, your first week of dinners may be quite a trial. Some dogs bark repeatedly and go through all manner of random actions to try to get you to feed them from the table. But once you have begun the training, stick with it. If you give in at any time, no matter how small the treat you sneak him, not only have you lost that battle, you may very well have lost the entire war. If you have made up your mind that you don't want begging, then it's just a matter of time before you have your dog resigned to the fact that the party is over, at least at the dinner table.

When your dog is steady enough to do the long “Down” away from your side during dinner, then establish his place where he stays while you eat. He should be put in his place every evening while you are eating, and praised when you release him at the end of the meal. It won't be too long before you will be eating dinner in the company of a well-trained, well- behaved dog lying quietly in the corner.

8. “Wait” is a very useful command that you can teach your dog. Teaching your pet how to wait is especially important if you are planning to work him all the way through to a reliable off-leash capability. It is one of the several safety commands that you can use to monitor him and keep him safe from potential danger.

There will be times when you need your dog to wait for you but not necessarily to be still. The “Stay” command would not be the appropriate command to use at those times. Also, there will be times when he will be in a hurry to have something or do something. “Wait” will be the right word to tell him that he can have what he wants, but not right away.

Because dogs live in the present moment, teaching them how to “Wait” not only adds an interesting and useful word to their vocabularies, but it also adds a concept that is very difficult for them to understand. However, your dog can understand the meaning of the word “Wait” on a short-term basis. The most effective way to train your dog to “Wait” is by tone of voice. Keep in mind that the tone of voice is one of the most effective tools that you can use in dog training. Your pet needs to be able to understand your tone to properly respond to it.

To understand how this kind of training works, keep in mind that your dog is a pack animal and that you are his pack leader. He looks to you for approval and direction. When he is doing something, anything at all, and you say a word, any word at all in a moderately disapproving tone, he will stop whatever it is he is doing because of your disapproval. For example, when you want him to wait at the bottom of the steps leading out of the park and you say “Wait” in a serious but not an angry tone, a trained dog will turn and look at you. At this point, say “Gooood dog” in a pleasant tone while he is waiting. If he continues up the steps, say “NO, WAIT!” in a firmer tone.

The difference between the command “Enough” and “Wait” is that “Enough means stopping the activity for now. On the other hand, “Wait” means a momentarily pause. In the example of the dog waiting to leave the park and jump into the car, the command “Wait” gives him the joy of anticipation. It lets him know that if he pauses for a moment, then he can continue going up the steps and that he has your approval.

He can also wait for you to go first through doorways and down flight of stairs. “Wait” must always be followed by the release word “Ok” to let your dog know it is ok for him to continue with the activity at hand.