Katie Cleary first hit our screens in season 1 of America’s Next Top Model. Since taking part on the show she’s had a varied career leading her to model on US TV’s Deal or No Deal and acting in films and shows such as The Break-Up, Rules of Engagement and Chuck.

Her passion for animal welfare led her to launch her own nonprofit, Peace 4 Animals, and she was instrumental in the banning of the sale of fur in the city of West Hollywood. Kim O’Meara caught up with Katie to find out all about her beloved dogs and what’s next for Peace 4 Animals.

I have four dogs that are all amazing rescues with such unique personalities. Charlie who is an Australian Shepherd/Terrier mix, who I rescued from the Pasadena Shelter, has the most adorable bandit markings on his face and has such an independent personality while always making sure that I’m there watching him, he is my heart.

My second is a little Chihuahua/Doxie mix I rescued from the streets, he was hit by a car and I found him in the middle of the road with a broken femur bone in his back leg. I took him to the vet and fixed him up and decided to keep him and name him Lucky. He is very sweet, always wants to sit on your lap and wants to be near you, he’s a lover.

My third is Butch, he is a German Shepherd/Labrador mix that was rescued by my husband in Compton with his brothers when he was a puppy. Butch is the grandpa of the bunch and always likes to regulate everything and make sure all of the other pups are in line. Butch is sweet but a bit more independent and loves his doggie bones.

And our fourth pup is Wolfie, I rescued him from the parking lot at the Baldwin Park Shelter, he is a beautiful Husky/Alaskan Malamute mix and was being given up at 3 months old by a family that couldn’t take care of him anymore. Thank god I was there to take him in and give him a loving home.

Wolfie is definitely the trouble maker of the bunch. He is now nine months old, he has so much energy and loves to run and chase everyone around the house. He loves to eat pillows, chew on everything and is just non-stop energy, but very lovable. They all get along very well with our three cats and sometimes all sleep together. I love that!

I'd say it came from when I was very young and my mom and I would rescue and bottle feed kittens that were abandoned that we had found in our neighborhood. We then started rescuing wildlife that was injured, like baby squirrels and birds, and feeding raccoons, cats and possums. 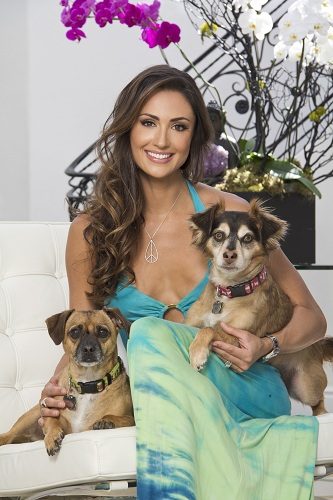 From then on, I knew that I wanted to work with animals for the rest of my life. There was such a bond and passion to help them, that I knew I had found my calling.

You're a big advocate of animal rights and in particular rescuing having rescued three of your dogs. Here in the UK we have around 100,000 dogs in rescue waiting for their new homes. What would you say to people thinking about getting a dog to encourage them to adopt wherever they are?

I would say to people who are looking to get a dog that that the most important thing they can do, is go to their local shelter to rescue one and be sure they are ready to commit to taking care of them. At least half of the animals in all shelters are pure breeds and you can find some amazing companions who are so deserving of a loving home.

At most shelters there are just not enough homes for the animals so most of the animals who are in the shelter are euthanized due to lack of space. It is very important to know that most dogs who you see in pet stores come from puppy mills. Here in the US, puppy mills are large breeding factories that have hundreds of pure breed dogs stuck in wire cages their whole life, never let out, living in their own mess. These dogs are just bred to supply puppies for pet stores. I tell people to never buy a dog from a pet store because then they are supporting the practice and inhumane treatment of animals.

Instead, there are so many dogs who need to be rescued at your local animal shelter with a great selection of all breeds to choose from.

Your career has been so varied to date since you first appeared on America's Next Top Model cycle 1, to the roles you've played in blockbuster hits such as Iron Man 2 and The Break-Up, and of course TV show Deal or No Deal in the US. Where would you like to see yourself in 5 years?

I see myself having my own TV Show on National Geographic or Animal Planet about animal rescue or traveling around the world educating people on animal issues. I would like my animal welfare organization, “Peace 4 Animals” to become a household name with our T-Shirt line coming out and dog and cat accessories, bowls, leashes, beds, that sort of thing, and when people buy something that says “Peace 4 Animals” they know a percentage of the sale is going towards charity and the animals that really need our help to survive.

I see myself filming more documentaries like the one I produced this year called “Give Me Shelter,” which focuses on important animal issues that are going on all around the world, and showing people what we can do to make a difference.

What, or perhaps who, inspired you to follow the career path you chose?

With my modeling career I was really inspired by Cindy Crawford because of her beauty, poise and strength as a powerful woman in the modeling world.

With my Philanthropy, I would say Jane Goodall because of her love for Chimpanzees and the passion she has to dedicate her life to helping them and giving them a voice in the wild.

Do you have a motto that you live your life by? What would you say your dogs mottos might be?

My motto would have to be "find your passion and purpose in this world and make a difference!" and I think my dogs motto would be “eat, sleep and play everyday as if it was your last!”.

If you were to swap roles with one of your dogs for a day, how do you think they'd cope being you and what would you love most about being them?

Oh wow! Well, I think they would find it being a big responsibility being me, many things to take care of and do and a lot of work all of the time. As for me having a day in the life of one of my dogs, I would  love being able to have no worries, play as much as I wanted, not have to take care of anything, sleep all day and eat whatever I wanted.

Tyra Banks (host of ANTM) – She'd definitely be a Boxer.

Donald Trump – I'd say he would be a Doberman Pincher.

Joanna Krupa (fellow supermodel and friend of Katie's) – (Laughs) Joanna would have to be a Weimaraner.

Justin Bieber – I think he would be a Komondor.

Big dogs or little dogs – Honestly, I love both.

Pedigree dogs or x breeds –  Definitely cross-breeds because they are so unique and are so deserving of a good home!

Days off or days at work  – Days off!

Describe the last time you laughed outloud because of something you saw one of your dogs, or another dog do.

(Laughs) The last time I laughed out loud was when all four of my dogs were sleeping on the couch laying on their backs in a row. It was the cutest thing I have ever seen. 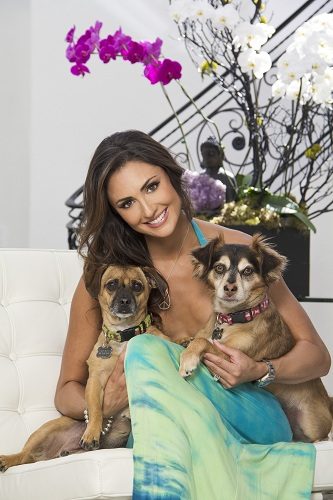 If you had the choice to arrange a dinner party taking three people (choosing from any era, past or present), who would you choose and why?

Oh, good question – let me think about this.

I would say Jesus and Moses because I love religious history and I would have so much to ask them that the dinner party would probably last a week. That would be amazing!

And thirdly I'd have to invite Einstein because of how amazingly smart he was and how much we could talk about and learn. It would be one unbelievable dinner party!

Film – I'd have to say Machine Gun Preacher.

I love exotic cars and go racing on the weekends with my husband every now and then.

The fact that you can have such an amazing connection with an animal without speaking and based solely on love, understanding, and compassion. That is truly what it’s all about for me.

I love how they are always by your side, don’t judge you and have an unconditional love that you can’t describe, that’s what makes having a dog one of the best experiences in my life.

Finish the following sentence, my dogs are...the most loved dogs in the world!

I'd ask them 'are you happy that I am your owner?' I think they would say YES!

Katie Was Speaking With Kim O'Meara