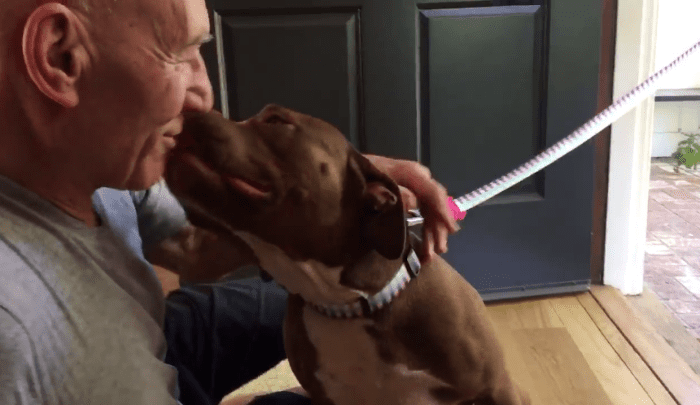 A homeless Pitbull in LA is discovering what love is in a foster home with Sir Patrick Stewart and wife Sunny Ozell, who is capturing the actor's special moments with their four-legged house guest named Ginger.

Stewart who has famously 'seen it all' over the years had the moment Ginger arrived from LA based rescue Wags and Walks and the ASPCA captured on camera by his wife, Sunny Ozell and it's clear it was love at first sight.

The X-Men actor revealed on a late night talk show during the week that Ginger would be his first dog in 50 years telling Conan excitedly "She only arrived a few hours ago at our house. I've longed for this moment to come."

Ginger will be staying with Stewart and his wife until a permanent home can be found. Being in a foster home will give her the chance to understand what home life is all about to help her settle better into her new home when she is matched with the right one for both her and her new family.

Clearly a very loving little dog, Stewart told Conan about his new foster dog's sad background saying she "comes from a pit bull fighting ring. She was a breeding dog for a fighting ring. They're all over the country, every state has these things and they're very cruel."

But even though this is what she has known of life, it is very clear to see that her future holds much better things.

Pitbulls are a much misunderstood and maligned breed across the world and are banned in Stewart's home country, the UK, which leads to dogs being targeted unnecessarily because of how they look, not act.

Head over to Sir Patrick Stewart's Twitter and Instagram pages to keep up to date with his adventures with Ginger at twitter.com/SirPatStew and twitter.com/sirpatstew where you can connect with Ginger's rescues if you're tempted to follow in the acting legend's footsteps.

Or if you're in the UK head to dogsblog.com where you can find over 500 animal rescues sharing details of their dogs looking to begin a new chapter. Bring joy, adopt a dog.

In this article:Featured, Issue 101

UK dog laws in 2021 are under constant review as new legislation is proposed and existing dog laws are sometimes ammended. One of the...

New trends show an increase in dog owners asking is fish good for dogs as a high quality diet and alternative to meat based...