Five dogs who were rejected for being "too ugly" have become the unlikely stars of a billboard campaign in New York City after posing with Wes Myron, who was ranked as the 'number one male model' in the world earlier this year.

Reasons like “she has droopy eyes”, “his smile is too wide”, and “his fur is too patchy” (for a Chihuahua whose previous owner had burned a hole in his back) were all given about the five dogs appearances when they were rejected by potential owners.

However, looking at the five dogs, the non-profit charity, Louie's Legacy, who is based in New York, saw nothing but beauty and so with the help of the former NHL pro turned model, the charity decided to put the five dogs on a fashion billboard with Wes to celebrate their beauty. 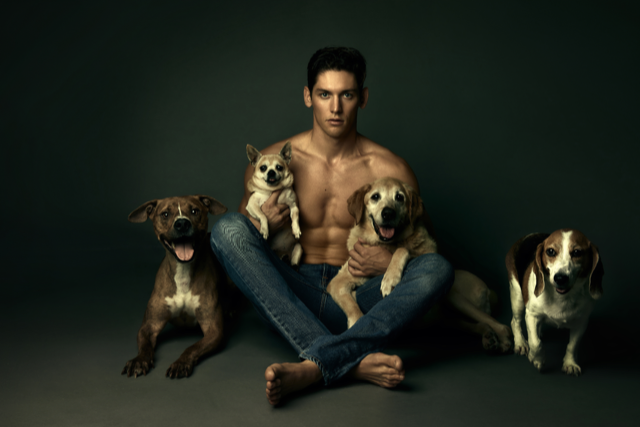 The charity’s founder Emily Gear met the model and fitness influencer in a chance meeting earlier this year, when dog-loving Myron agreed to do whatever he could to help. After hearing yet another potential rehomer rejecting a dog for not being attractive enough, she reached out to him to help show their beauty.

Emily said, “We have been rehoming pets for nine years now, saving over 15,000 animals, and it angered me when I heard these five dogs were being told they were too unattractive to love, over and over again. It was then I remembered how Wes had offered to help, so we created this campaign showing just how beautiful inside and out these dogs are. They look a million dollars on the billboards.” 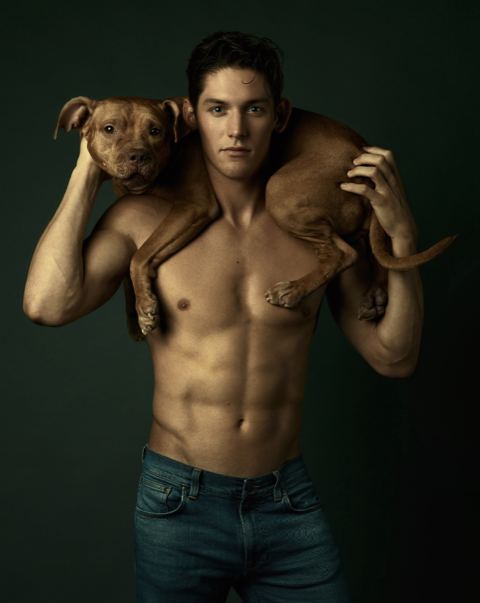 On why he was so keen to get involved Wes told us, "I’ve always grown up with dogs, and just connect with them. It’s still pretty raw, but we lost my family dog, Reggie recently, and I know the difference a dog brings to a home.

“It blows my mind that people would ever look at any dog, let alone these five, and criticize their appearance. When Emily got in touch it was easy to say yes, and it’s a real privilege to share a billboard with five genuine stars. I really hope this campaign finds homes for these awesome dogs, who deserve a great home!”

A foster based rescue, Louie's Legacy is named after Emily's first dog as an adult. She adopted him in 2006 and he helped her battle PTSD.

She tells us, "In helping him through the long and difficult treatment over the course of a month, I opened up in ways that I had shut down in other parts of my life. He was the gateway to my personal healing from incredible trauma, just as I was the gateway to his saving and healing.

"Louie had come from a shelter in South Carolina which, in 2006, had an over 90% kill rate. I realized that the chances of he and I ever crossing paths and of him having literally saved my life were so slim - it must have been fate. I also realized that 90% of that shelter's animals, who could also be saving the lives of other human beings, were ending up in trash bags in the county dump.

"This was the horrible realization which made me jump into action. I helped other rescues until I founded Louie's Legacy in 2009 after I lost him in a tragic accident. Because of his incredible legacy, we have saved over 15,000 animals since."

The charity hopes their latest high profile campaign will find homes for all five dogs posing with Wes, as well as raise awareness that all pets are deserving of a loving forever home, regardless of appearance.

Here's more about the five dogs who hope to steal the hearts of new owners after achieving billboard fame.

Jerry came into the shelter in a highly distressed state, after a former owner had burned a patch of fur off his back. The potential rehomer met gentle Jerry and said he looked “too patchy”.

Cash has two speeds - play, and play harder, and really aims to please his person. However, when the potential rehomer met Cash he said, “his smile is too wide - it looks weird”.

Helena is a puppy trapped in a senior's body - she has severe arthritis that limits her mobility, but still tries her best to play fetch. But when the potential rehomer met her, she was rejected because “her eyes are too droopy”.

Jeda is so kind and gentle, and loves sweet potato treats and belly rubs. However, when the potential rehomer met her she said “she looks too mean”.

Bessie’s hobbies include snuggling, napping, sniffing out unattended food, and daydreaming about who her future family is. She thought that may have been when the potential rehoming family came to meet her, until they said “she’s too fat”.

If you can give a home to one of these five wonderful dogs, please visit the Louie's Legacy Facebook page to find out more about any of the dogs featured here.

And if you're UK based, please consider adopting a dog from www.dogsblog.com.