Last year we shared the story of a dog named Sky who was seized by police. She hadn't done anything wrong. Quite the opposite, and yet her life was left hanging in the balance for years.

Eleanor and Barbara McCann met Sky in 2015. They fell in love with her and with the help of the non-profit organisation, DDA Watch they have been fighting for her life ever since - until now that is. 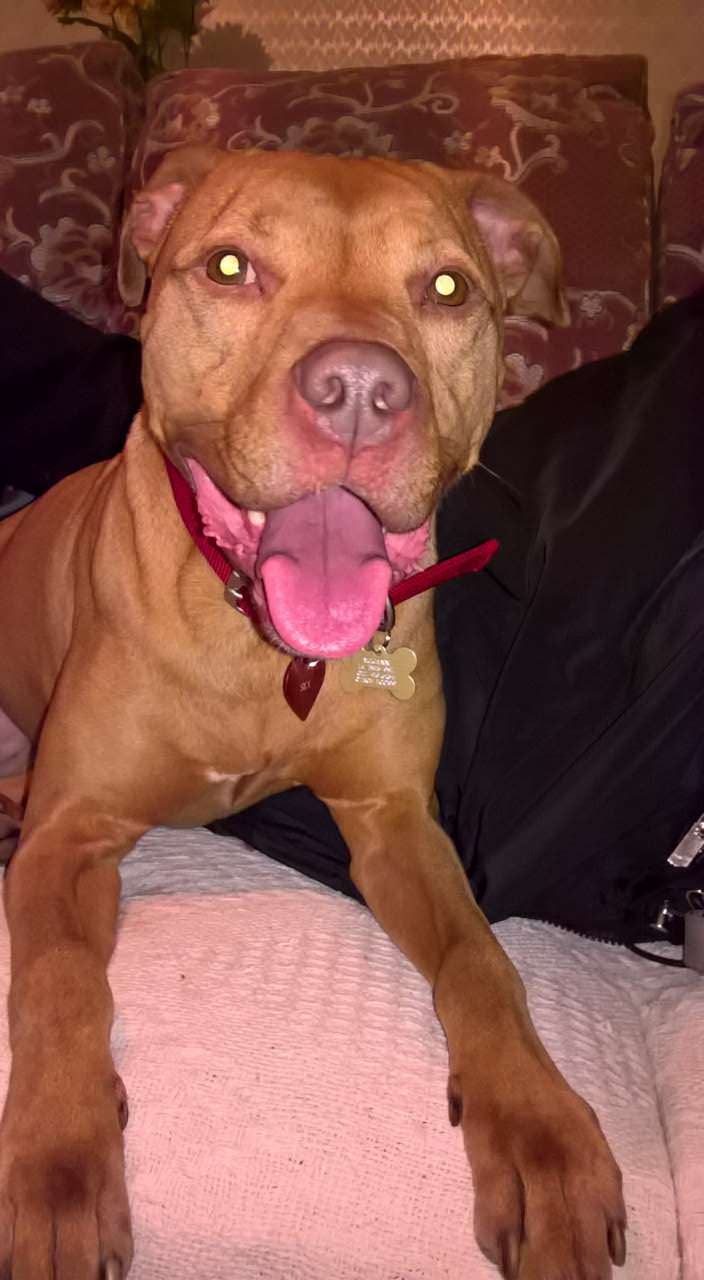 Sky, pictured in her new home with the McCanns after being saved

After spending nearly three years locked up, Sky was finally freed at the end of January. Eleanor tells us, "Sky has settled in so well and recognised us straight away it really is a dream come true for us."

Well, Sky had been left at the kennels by her young owner and it was here, while she was being cared for by staff and volunteers, that Eleanor and her mum, Barbara met the then four and a half year old cross-breed.

DDA Watch, who fought to save Sky's life told us she had previously been registered (exempted via court order) on the Index of Exempted Dogs some time ago.

This index effectively is a list of dogs who are deemed to be a banned breed, or 'type', and the court believes that the dog is not a danger to the public. By being on the list, they allow the dog's owner to register their dog and adhere to restrictions and guidelines in order to keep and save the dog's life.

The organisation tells us, "In 2015 her owner had placed Sky in kennels and did not return for her. This was when it was discovered he had moved to Australia and the kennels took care of Sky before she was seized by police under Breed Specific Legislation.

"The police then applied to the court for a destruction order which the magistrates’ court granted. Sky initially had no legal representation. Since then DDA Watch agreed to fund her case and Wheldon Law were instructed to act on her behalf and an appeal was then lodged."

The final year of Sky's fight to live

After fighting Sky's corner, she was granted a last-minute stay of execution and that's where our story ended last March.

Here's what happened since then leading up to Sky's release, and how her freedom could help to save others seized because of how they look, rather than act, in the future.

DDA Watch tell us, "As you will be aware, beautiful friendly Sky has never put a paw wrong and was ordered exempted within two calendar months in August 2016 by Bristol Crown Court who found she posed no danger to public safety.

"The court agreed that a new keeper could be appointed for Sky (this became Barbara McCann), but Avon and Somerset Police disputed the order and DEFRA refused to register Sky to her new keeper.

"Sky's dedicated legal team then worked away again tirelessly to put together and serve an application to state a case on Bristol Crown Court, the application was also served on Avon and Somerset police.

"Avon and Somerset Police tried to prevent a stay of execution from being extended which would have put Sky at immediate risk of destruction.

"The legal team worked on this and gained the CDO extension to the 5th April 2017 and after a lengthy court hearing on the 4th April 2017, the judge at Bristol Crown Court agreed to state a case.

"This meant that a higher court would now consider Sky's case and an important outcome for Sky and a legal ruling which would affect other dogs was expected."

As the months passed, fundraising and awareness of Sky’s case continued.

"As there was no legal aid possible throughout Sky’s exhaustive legal battle and her case was supported by DDA Watch and Team Sky who organised many fundraising activities for Sky including auctions, raffles, stalls, tombola, table top sales, car boot sales, competitions, sales of donated items including t-shirts, wristbands, keyrings, books, CD’s and so on"

"It was a very long day, as we all waited for the news with our stomachs in knots, the High Court reserved judgment and we then had to wait once again."

"On November 10th London’s High Court heard the case of Sky – a dog whose owners, the police and DEFRA all agreed was well behaved, yet who was at risk of being put down just for ‘looking like’ a pit bull.

"Her owners had always complied with the required conditions to keep her, yet when they went to Australia and left Sky in kennels, police attempted to put her down without reason. It’s only because the kennel owners challenged this in court that Sky is still alive.

"Breed Specific Legislation was rushed through Parliament without proper consideration of its potential impacts. It continues to target harmless family dogs for just looking similar to banned breeds – whilst failing to protect the public from violent dog attacks, as the number of dog attacks has risen consistently since the legislation was introduced.

"The Government needs to ensure that cases like Sky do not continue to happen. This requires switching to an approach that focuses on better training for dog owners, clamping down on owners who breed their dogs to fight, and intervening better when any type of dog is seen to have behavioural problems.”

The organisation tell us that what happened next could help to save more dogs in the future.

"On the 20th December 2017, we were able to confirm we had fantastic news in for Sky - the case-stated appeal was allowed by the High Court who was to send Sky’s case back to the Crown Court and we had a High Court Judgment which would save other dogs lives! The Crown Court was to decide on whether the proposed keeper satisfies the definition of a “person for the time being in charge.”

How Sky's legacy could save other dogs seized

DDA Watch tell us that Sky's case had huge implications.

They tell us that there are certain things that make Sky's case significant for her and potentially other dogs caught up in the failed breed specific legislation.

1. More than one person can be the person for the time being in charge.

2. “For the time being in charge” doesn’t have to be at the time the dog was seized or at the time of the court hearing but the proposed keeper must have been in charge of the dog at some point past or present. It cannot extend to include proposed future contact.

3. The concept of being in charge relates to whether a person has responsibility for the dog.

By way of background, Statutory Instrument 138 of 2015 closed the door on “stranger keepers” by introducing the requirement that a dog could only be exempted to the owner or a person for the time being in charge of the dog.

DEFRA and Avon and Somerset Police did not accept that Sky’s proposed keeper satisfied the definition of the person for the time being in charge.

This judgement gives clear indication that a volunteer at a kennels can be capable of being deemed to be a person for the time being in charge.

Although the judgement doesn’t go as far as allowing a "stranger keeper", it still clarifies who can qualify as being in charge and will result in many more innocent dogs being saved from destruction.

Sky's legal team worked to bring Sky’s case before the Crown Court as soon as possible and a hearing took place before Bristol Crown Court on the 22nd January 2018.

The court made a contingent destruction order meaning that Sky could live with her new keeper as an exempted dog.

The Crown Court said it was “as plain as a pikestaff” that they had been in charge of Sky at the relevant time, a necessary requirement for someone to be appointed as a keeper, the court was also critical of the police who had said before Christmas that Sky would be released but then reneged on that promise.

Sky completed the exemption process very quickly and was released to her loving family who had fought so hard to save her; DDA Watch was delighted to share the news of her long-awaited release the 30th January 2018. 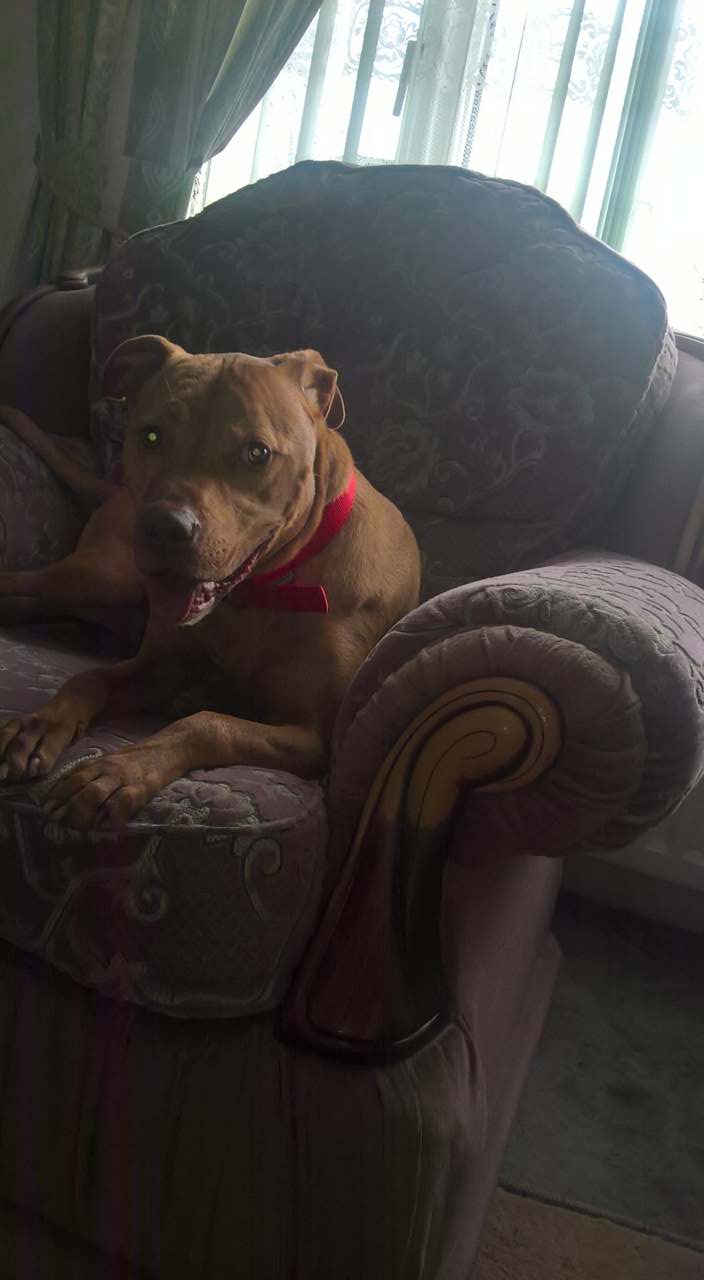 We wish Sky and her new family all the best for the future and congratulate DDA Watch and Wheldon Law for their hard work to save her.