Stephanie Davis is best known for her role playing Sinead O'Connor in Channel 4's soap Hollyoaks. Some readers might also remember her from her time competing in BBC's 'Over The Rainbow' talent search in 2010.

With some exciting storylines ahead with her soap-mum Alex Fletcher, we caught up with Stephanie to hear all about her time in Hollyoaks, plans for the future and most importantly of all, her beloved dog Romeo.

Romeo is a 8 ½ month old Bichon Frise boy. I'd always wanted a dog but have always been allergic to them so when Alex (Fletcher) had Zuko, a Bichon Frise boy, and I met him and found out he was hypoallergenic I literally went out almost straight away and found a breeder and chose him as a puppy when he was 6 weeks old.

He's still really young and completely different to Zuko. He has these mad spells at around 9pm every night where he just zooms around.

He's brilliant and I love him to bits but he's put me off having kids, he's hard work! 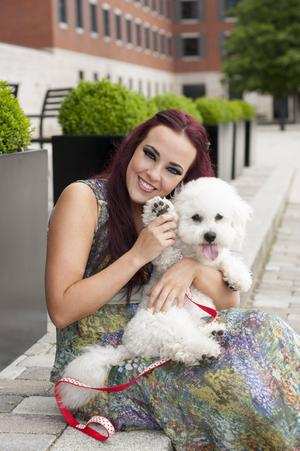 I've always loved animals but because of my allergy – I'm even allergic to fish – I couldn't have any, so meeting Zuko and finding out about hypoallergenic dog breeds and breeds with coats that won't affect my allergies was life-changing.

You've been playing Sinead O'Connor on our screens since September 2010 in Hollyoaks, what do you love most about the Sinead? She's had some huge storylines, with more to come, so she must be a great challenge!

I like her feisty nature although she's gone quiet recently. I love working with Alex who plays my mum, Diane, we're like real-life mum and daughter.

I'm loving Hollyoaks, the people I work with and the storylines I get to work on, it's just brilliant and although I'd love to try lots of different things, I love it here and I'll stay as long as they'll have me.

But I'm still young so I think 'take time to enjoy it'.

Did you always want to go into acting?

Acting and performing always been a huge passion, it's all I can remember ever wanting to do when I was growing up.

Before you appeared on our screens in Hollyoaks, readers will remember you from the BBC's search for Dorothy in 'Over The Rainbow'. Is theatre a big love of yours?

I did get a few offers after 'Over The Rainbow' but around the same time I got the offer from Hollyoaks and I chatted things through with my mum and dad and they were a great help. I've always dreamed about walking on the cobbled stones in Hollyoaks.

Do you have a motto that you live your life by? What would you say Romeo's motto might be?

(Laughs) Mine would be 'you only live once', I have it tattooed on my foot and Romeo's would probably be 'don't leave me behind'.

If you were to swap roles with Romeo for a day, how do you think he'd cope being you and what would you most love about being him?

(Laughs) Wow! Well, I'd love to sit around all day, sleeping, eating and being cuddled. I could chill and sleep all day, I'd really love that.

But Romeo as me? I think he'd freak out a bit. He jumps on everyone.

Jonny Clarke (plays Bart McQueen in Hollyoaks) – He'd definitely be a Bulldog. He has those droopy eyes, woofs and he does have one and they do say dogs look like their owners, don't they!

Dame Judi Dench – She'd definitely be a Maltese, I could imagine her as a white and fluffy dog. Very elegant.

Andrew Lloyd Webber – (Laughs) He'd have to be the Toto dog! He was obsessed with Over The Rainbow (in a good way!).

Sheree Murphy – She'd be a Cocker Spaniel with her glossy, curly black hair.

Big dogs or little dogs – I'd have to choose little dogs, mainly because I'm a bit scared of big dogs though.

Pedigree dogs or x breeds – I'm honestly not fussed, that said some pedigrees have class.

Days off or days at work – Days at work! (Laughs) Does that sound sad? I love the people I work with, we have such a laugh together whether onset or chilling out in the green room.

Describe the last time you laughed outloud because of something you saw Romeo, or another dog do.

The last time had to be when he went to the toilet in the kitchen. He had such an expression on his face like he knew he was a naughty boy. 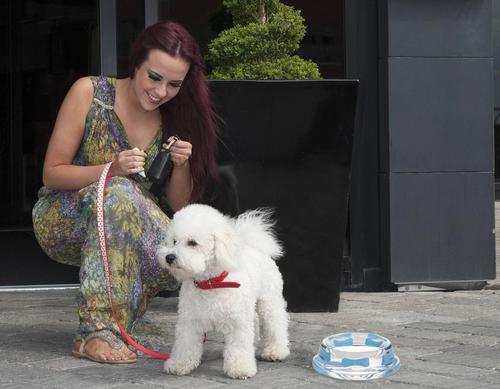 (Laughs) Oh, who to choose! Firstly I'd have to ask Alfie Moon from EastEnders, I think he'd be a proper good laugh.

Secondly I'd have to invite Sophie Webster from Corrie so we could talk about girly things!

Lastly I'd have to invite Dennis Savage from Hollyoaks because I think he's unbelievably funny. He always has me in stitches.

TV show – Friends, I'm addicted! I've also gotten into Keeping Up With The Kardashians and I'm fascinated by them.

Film – My all time favourite film is 'Legend of the Fall' with Brad Pitt, it's just brilliant.

There's so much, but I think the best thing has to be the unconditional love.

Finish the following sentence, my dog is... absolutely mental. Lovely – but mental.

And finally, this is always a tough question and often requires a fair degree of thinking time but….If Romeo had the ability to speak and answer one question and one question only, what would you ask him and what do you think that he would say?

Oh good question! You know, I think I'd ask him if he could see in black and white or in colour and I'd also ask under normal circumstances 'can you understand what I say?'

I've no idea what he'd say to either question but I'd love to hear the answers!

Stephanie Was Speaking With Kim O'Meara

And last but not least, The Malmaison Liverpool (Summer rates online from £69 or see their fabulous offer of the Summer Beatles Package which is £199bb for two nights based on two people and includes tickets for the Beatles Story. Don’t miss out! Find out more by clicking here)