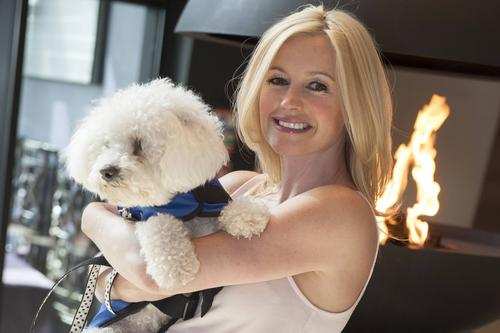 Alex Fletcher is perhaps best known for playing Jacqui Farnham (née Dixon) in Channel 4's Brookside. A Liverpool girl, it's no surprise we now see her in Chester's very own soap opera, Hollyoaks, where she plays Diane O'Connor, soap-mum to Stephanie Davis.

We caught up with busy mum Alex to talk about everything from Celebrity Masterchef, the future of her character in Hollyoaks and her best friend, Zuko.

Zuko is a Bichon Frise boy who's just turned 3 years old. We decided to get a dog after a weekend away, we went to see Grease and we stayed with a family and they had dogs. My little girl, Yasmin, is 7 years old and she didn't move from their sides. She absolutely loved being in their company so when we got home my husband Neil said 'let's get a dog'.

Zuko is little but frisky. He's so obedient, so clever but he combines that with being a looney bin. He has this breed trait called a 'Bichon Blitz' where he has spells having masses of energy and just goes mad running around but he's a brilliant dog.

He's such a good little companion, he comes out running with me – we went for a big long run this morning. Yasmin doesn't have any brothers or sisters and she'll just sit and play with him, she loves him to bits.

I'm not really a cat person, I think it's the welcome you get from a dog that's brilliant. When you've been out all day and they're made up to see you.

I don't think we could have picked a better boy for us.

I've always loved dogs and had some growing up with a couple which passed away sadly. My mum has a dog and he gets on really well with Zuko.

You've been playing Diane O'Connor on our screens since Summer 2010 in Hollyoaks, what do you love most about the character you play compared to other characters you've been most known for, such as Jacqui Farnham (née Dixon) in Brookside?

Diane is a totally different character to play from Jacqui so it's a lot of fun. Diane and Jacqui both have scouse accents, I think I do that one best (laughs) but that's probably where the similarities start and end.

Jacqui was really bossy and a young entrepreneur. Diane is a mum and I can connect with her now that I'm a mum myself so I can play her differently. She's a really caring person but a bit nosey with it! She keeps a beady eye on her daughter, Sinead (played by Stephanie Davis).

The thing that I love most is that the production company for Brookie was Lime Pictures and they're the production company for Hollyoaks aswell so it really feels like I've come home because some of the same people are still here so it doesn't feel like much has changed although the cast is a lot younger than Brookie – a bit depressing really (laughs) now I feel like one of the older members.

It's really brilliant to have a regular job again – and to go to the Soap Awards again!

Especially in this line of work having a steady job is pretty rare in itself, let alone one just down the road from where you live. I was at Brookie for 15 years, it's where I met my husband Neil (he played Robbie Moffatt in the show) so it was a huge part of my life.

Now I have Hollyoaks, my dog, my daughter and my husband and I feel really lucky.

I think their storylines with Silas have been amazing and it's not over yet! We have had lots of new people coming in such as the new family, the Savages, who bring a lot of talent with them.

The show is definitely back on track, there's a family feel back on the show. Hollyoaks has always been different tackling lots of issues which affect young people before other shows have.

Do you have a motto that you live your life by? What would you say Zuko's motto might be?

Oh let me think! Mine would probably have to be 'always be yourself', you have to be true to yourself otherwise you'll be found out.

(Laughs) As for Zuko, he's such a funny little boy I don't think he'd have one – I honestly don't think he'd care what a motto even was but I'd encourage him to have one like 'be kind, mix well with others and be honest'.

You took part in Celebrity Masterchef a couple of years ago, following in the footsteps of other Brookside cast members. Dancing On Ice always seems to be popular with the Hollyoaks cast, would that appeal to you at some point?

I'd give my right leg to do Dancing On Ice, honestly I would! I auditioned about 4 years ago in fact, so they've got my audition tape. It's a really popular show, always lots of interest in taking part so it's really competitive, I'm sure a lot of people would love to take part but I'd love to put my skates on and put 110% into it.

I'm a fitness freak to be honest, running, dance, step classes anything! I love learning a new skill which is what appealed about Celebrity Masterchef.

If you were to swap roles with Zuko for a day, how do you think he'd cope being you and what would you most love about being him?

He's so happy in his own shell, he's a dead cool dog so I'd love to be him but I think he'd get fed up being me.

I'm not sure he'd cope, particularly with my step class to be honest, saying that he will happily go for a run with me. I'm always doing something, whether on my phone or on Twitter or something.

Matthew Wright (Morning TV presenter) – He'd definitely be a feisty Jack Russell Terrier. I was on his show some months ago and I was really quite nervous, he's so quick witted isn't he. He's a lovely man.

Tricia Penrose – She'd have to be a Yorkshire Terrier – little, soft, cute and smiley!

John Bishop – We're dead proud of him in Liverpool! I think he'd be a Boston Terrier, it's in the eyes – they're quite big aren't they. My friend has one who's adorable.

Sue Johnston (played Sheila Grant in Brookside) – Ah, she'd be a really nice Labrador. She has quite a soft nature and is easy going.

Big dogs or little dogs – I'm not really into big dogs to be honest, nothing against them really, it's just I think little ones can be a bit lower maintenance, for example Zuko doesn't moult.

Pedigree dogs or x breeds – I honestly wouldn't care, it's all about the personality. We did consider rescuing, it was just because we didn't know their backgrounds fully we were put off a little because of Yasmin.

Days off or days at work – I really like to be busy, I go stir crazy otherwise so I think I'd have to say days at work.

Describe the last time you laughed outloud because of something you saw Zuko, or another dog do.

(Laughs) It was so funny. Zuko has a plastic bowl that he gets fed in and he picked it up and took it into the kitchen and just dropped it as if to say 'get me my dinner'. He's very clever – and cheeky!

Could I invite Keith Lemon aswell? He's a huge Brookie fan and so funny, he could keep us all entertained.

Zuko is dead cuddly, I sneak him on the bed when Neil's not around. They don't want for much do they – love, walks and food, and they give so much.

Finish the following sentence, my dog is... my little pal!

And finally, this is always a tough question and often requires a fair degree of thinking time but….If Zuko had the ability to speak and answer one question and one question only, what would you ask them and what do you think that they would say?

I'd ask him 'do you miss your family'? I often wonder if he misses his siblings and I think he'd say 'yeah', he was really good friends with his brother.

Notforpussys.com – For their I Bone Hoodie & Go Walk Raincoat

And last but not least, The Malmaison Liverpool (Summer rates online from £69 or see their fabulous offer of the Summer Beatles Package which is £199bb for two nights based on two people and includes tickets for the Beatles Story. Don’t miss out! Find out more by clicking here)

Inside this edition of K9 Magazine.... Talking Point: Love Your Life With Dogs (even more!) Interview With Hollyoaks Girls Alex Fletcher & Stephanie Davis...

Stephanie Davis is best known for her role playing Sinead O'Connor in Channel 4's soap Hollyoaks. Some readers might also remember her from her...

The UK’s Most Pet Friendly Places To Visit

A recent survey released by Confused.com revealed that 27% of dog owners are planning a round trip of up to 101 miles to give...

The Seven Most Influential Dogs Of All Time

This isn’t homage to dogs that did good things, K9 Magazine has plenty of those in the archives. This is a reflection on which...