Continuing our series discovering more about our canine’s cousins, this issue we delve into the history of The Raccoon Dog or Tanuki as it’s referred to in Japanese. The species could pass as a Raccoon, to whom it only has a distant relationship, rather than as a Canid, hence the name, Raccoon Dog.

The animal is quite well distributed around Asia and parts of Europe, but its heritage and history are inextricably linked to Japan and its culture.

As Patrick Ellis discovered, Raccoon Dogs are native to Japan, parts of Southern Siberia and other parts of Asia. However, the species ranges as far as Scandinavia and even France.

They do exist in China, but are often killed for their fur. They favour hilly areas with dense woodland but are often seen in and around villages. Although they are related to the domestic dog, they do have many striking similarities to other animals such as Raccoons and Bears. 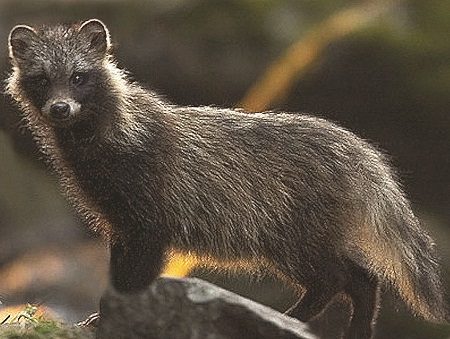 They feed on a diverse range of prey as well as being perfectly adapted to surviving on a diet of berries, seeds and other vegetation if needs be. Their prey is usually dictated by what is available in each separate habitat, but Frogs, Lizards, Rats, Mice and Birds are all tempting snacks for the Raccoon Dog. Some Raccoon Dogs can hunt in shallow water, adding Crabs and even dead marine creatures to the menu. The main similarity they have to Bears is their tendency to hibernate throughout Winter, the only member of the dog family to do so. Throughout the year the Raccoon Dog lives in a shallow, dug out burrow, where the young are reared and couples hibernate.

They are fairly robust, sturdy mammals, with an average length of around 2ft and weight of up to 22lb. They usually live no longer than 4 years in the wild but can survive well past 10 years in captivity. The average litter contains around 5 pups. At present the scientific community is debating whether or not to establish different subspecies of the Raccoon Dog, such are some of the discrepancies in size between those living in Japan and elsewhere.

The Raccoon Dog has short legs and a dense back coat. The hairs of the coat have a yellow tip, which in certain lights looks particularly striking, even if only for a fleeting glance. The teeth are blunt, unlike most other canines. Shy and cautious are two words that accurately describe almost all of the behaviours demonstrated by Raccoon Dogs. When feeling threatened they sometimes scream or even pretend to be dead and will only fight either as a last resort or if it is with other Raccoon Dogs over a female mate. Once couples are established, they remain monogamous and the male plays a large part in rearing the young.

One thing that is striking about the Raccoon Dog is that the male has unusually large testicles. This, amongst other unusual features has placed the Raccoon Dog very firmly in Japanese folklore. Referred to as Tanuki, the animal and his rather impressive appendages are featured in many, often comical scenarios.

Statues of Tanuki feature outside many Japanese temples and restaurants. He is often featured wearing a pointy hat and carrying a note in his hand, which is said to be an ‘I owe you’ that he never actually pays. He always has a fat stomach and often has his large ‘symbols of fertility and plenty’ on display. The Japanese see this as a symbol of good luck rather than anything crude or sexual.

The Raccoon Dog is positively prominent in Japanese culture, contrasting his elusive and furtive role in natural life. Tanuki has appeared in many Japanese cartoons and computer games, including Mario Bros. 3 and a popular anime cartoon where once again, a certain part of his body is used to ‘swipe’ at police officers. It is thought that the prominence of Tanuki dates back to the Kamakura and Muromachi eras.

The early portrayals of the creature hinted at a more sinister animal, which in legend murders a woman with a club and then feeds her to her husband. As the legend transcended further generations, Tanuki became less and less evil and more and more accessible for Japanese pop culture.

Stay tuned for the next in our Canine Cousins series!