Recently, inspired by a conversation in our offices, I took a quiz and it turns out I'm a 'pet parent'. Perhaps not a surprise, I have three dogs, a house cat and a cat who lives in our garage, who I've nicknamed Gary.

I change plans to suit my pets. I try to make as few unflexible plans in the Winter time as possible in case of unexpected fireworks because my middle dog, Danny suffers from anxiety and since my oldest dog, Mia got ill this Summer and her mobility suffered, my routine has completely changed to suit her needs too. I am where she is, essentially. But if work or life calls me away, I regularly call home to check in using one of our pet treat dispensing cameras. 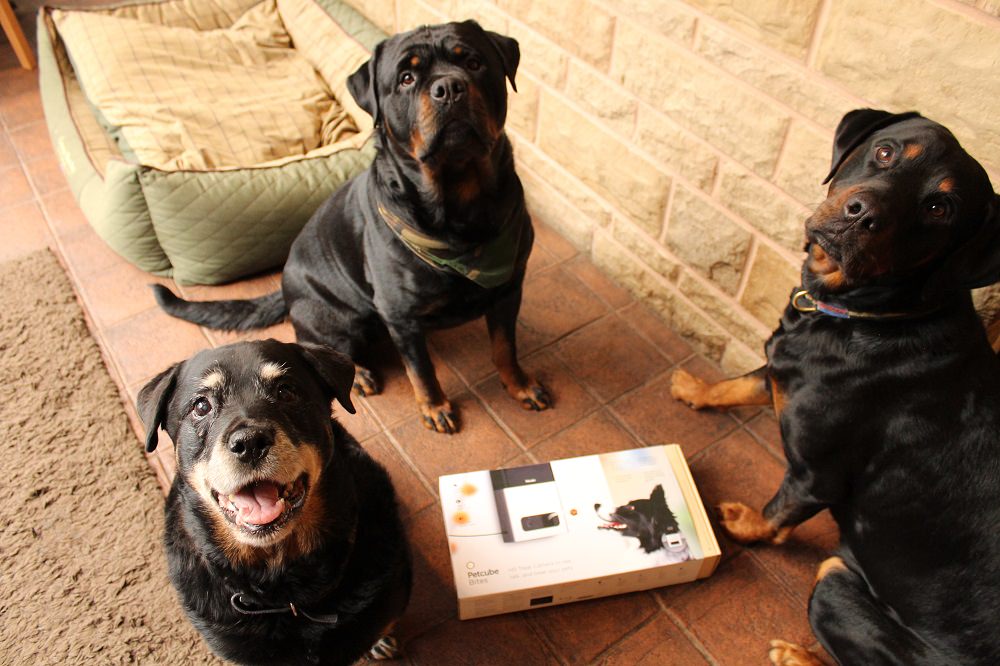 I used to say it was for my dogs' benefit because I knew they enjoy being treated, but really, it's as much for my benefit as theirs. I like, perhaps need, to feel connected because they're a big part of my world.

Over the last two years more pet dispensing treat cameras have come onto the market, updating what once was the status quo for a pet treat camera, making use of technology's advancements.

A couple of months ago I was given the chance to put the Petcubes Bites (£219) to the test. Here's how I, and my dogs, got on. 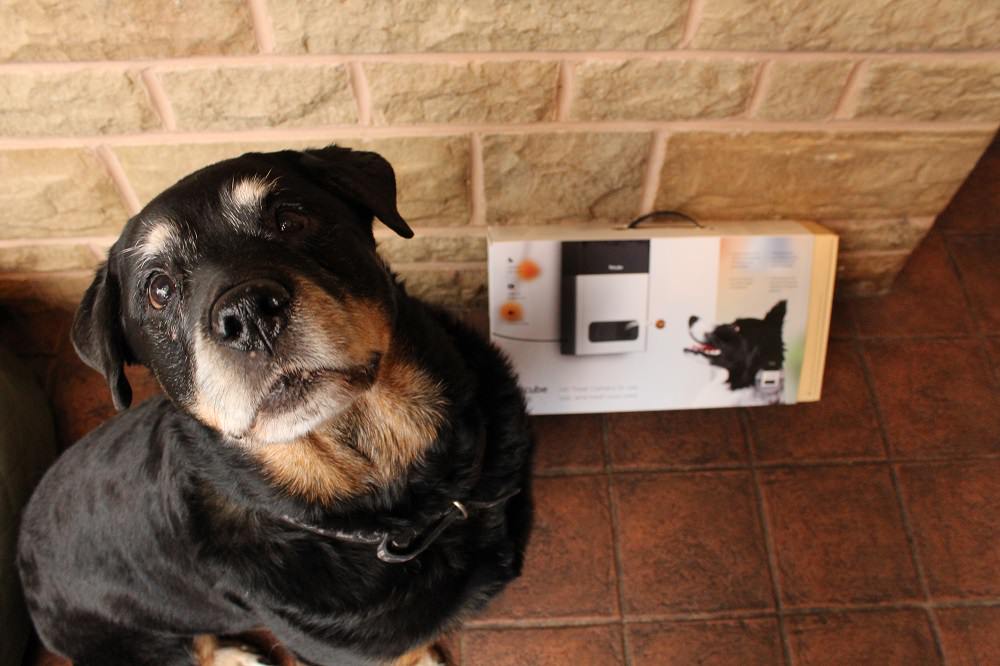 When the Petcube Bites pet camera arrived, I was excited to give it a try.

However, it arrived just as Mia got ill and so I decided to wait until she was on the mend. After all, she's our pet treat cam connoisseur and anything else would have felt unfair. 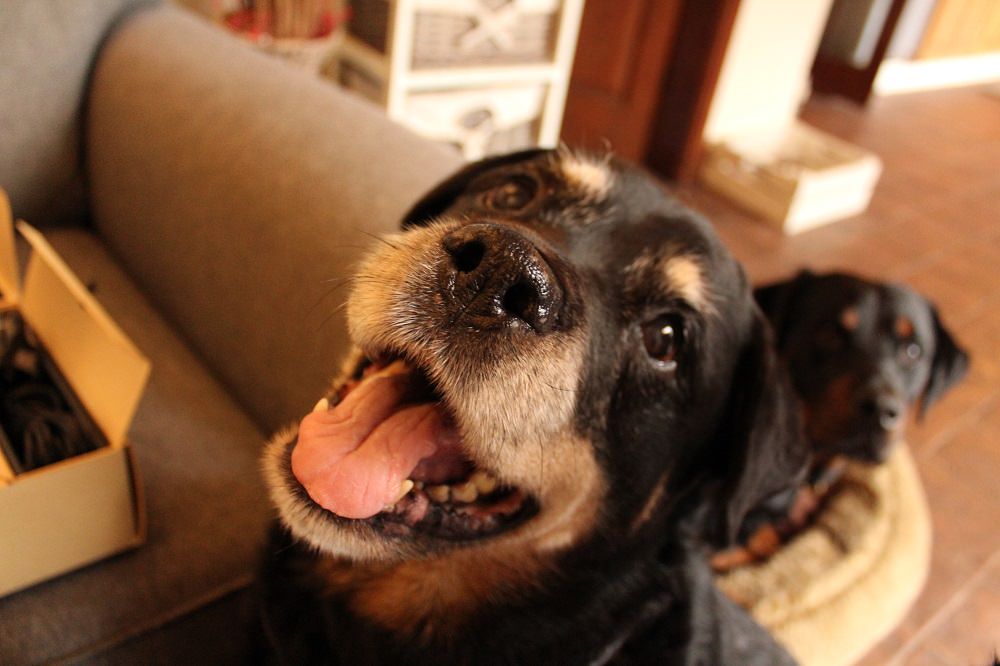 After unboxing, my first impressions were good. It's clear it has been designed with modern dog owners in mind, with a style that will subtly fit into homes. 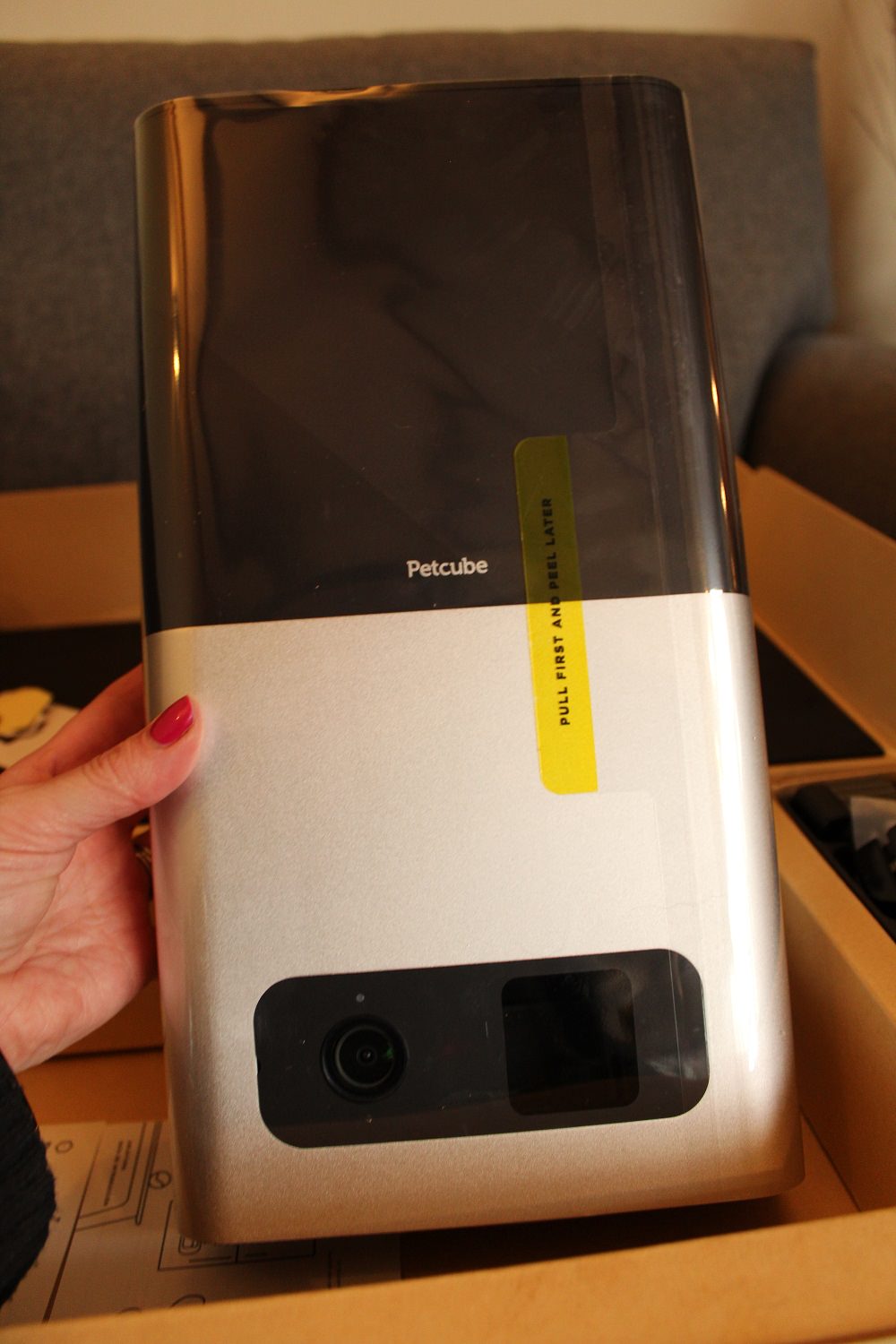 The plug is universal and comes with two different socket fixtures. 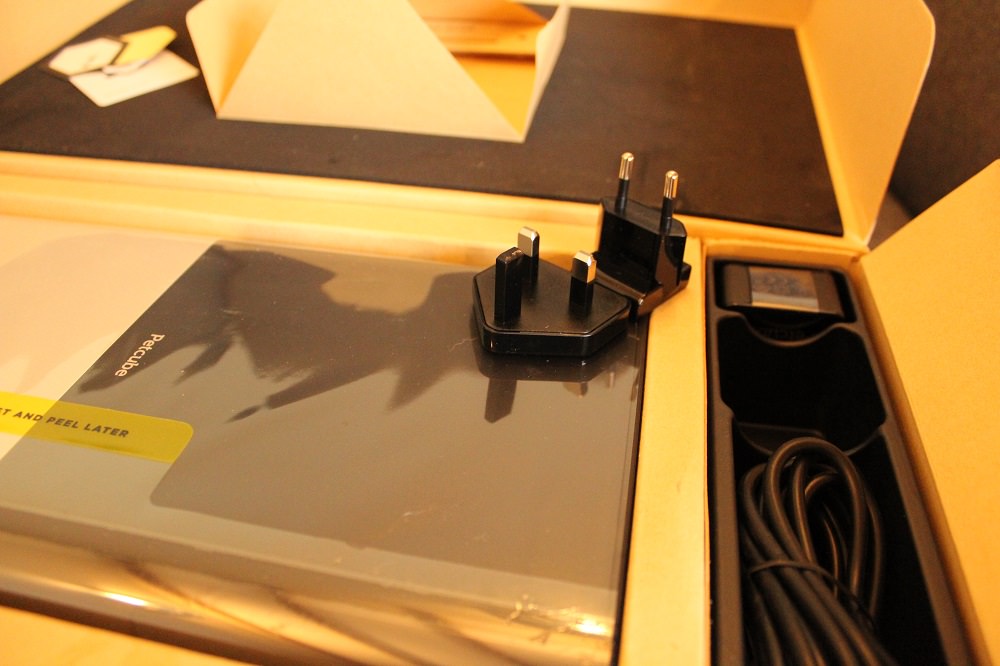 You don't need to put a lot of time into the setup, but the instructions are helpful if you want to fit it to a wall or unit. 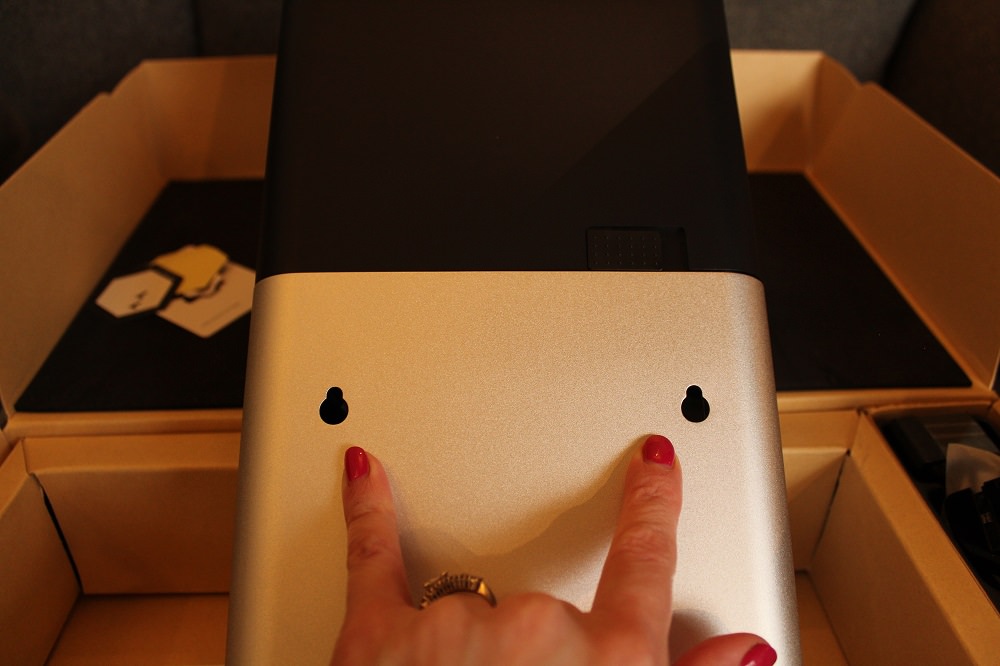 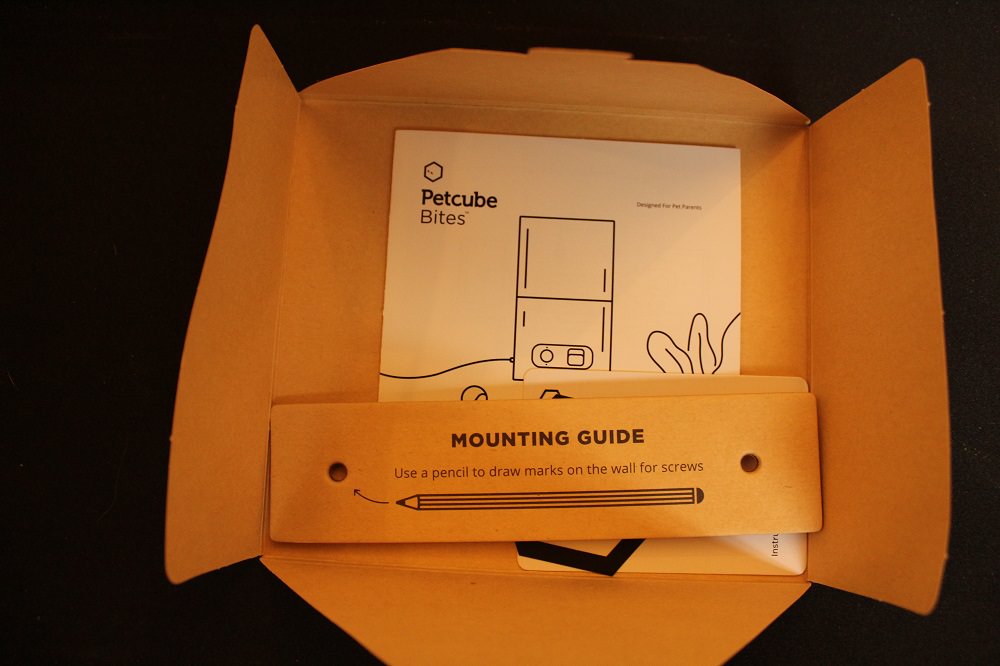 I wanted to have it free standing because my three dogs are all different heights and I wasn't really sure which height it would have needed to be at for maximum use for all three, to be honest.

The non-stick bottom makes this perfectly do-able - and it really does stay in place thanks to the rubber mat bottom. 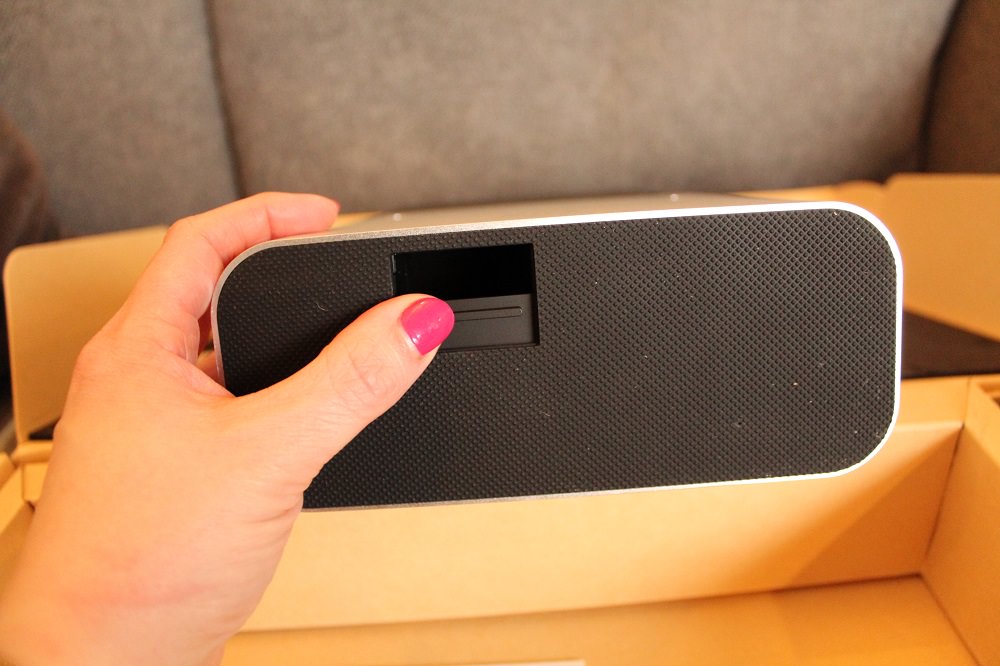 The Petcube Bites hold 100 treat pieces and the instructions also give good guidance on the best type of treats needed. As with all pet cameras, go for small, hard treats. Anything soft or too big just won't work. 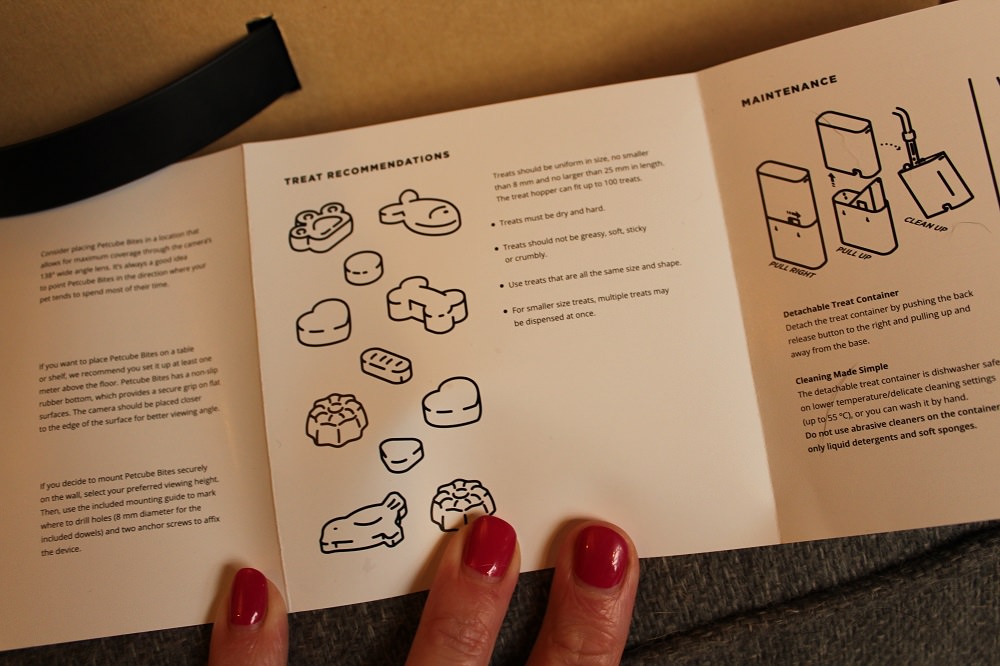 To refill, all you do is take the black lid off, pushing in the two springs at the top, or you can take the black part off entirely to correct or refill by pushing the spring at the back across and lifting up. 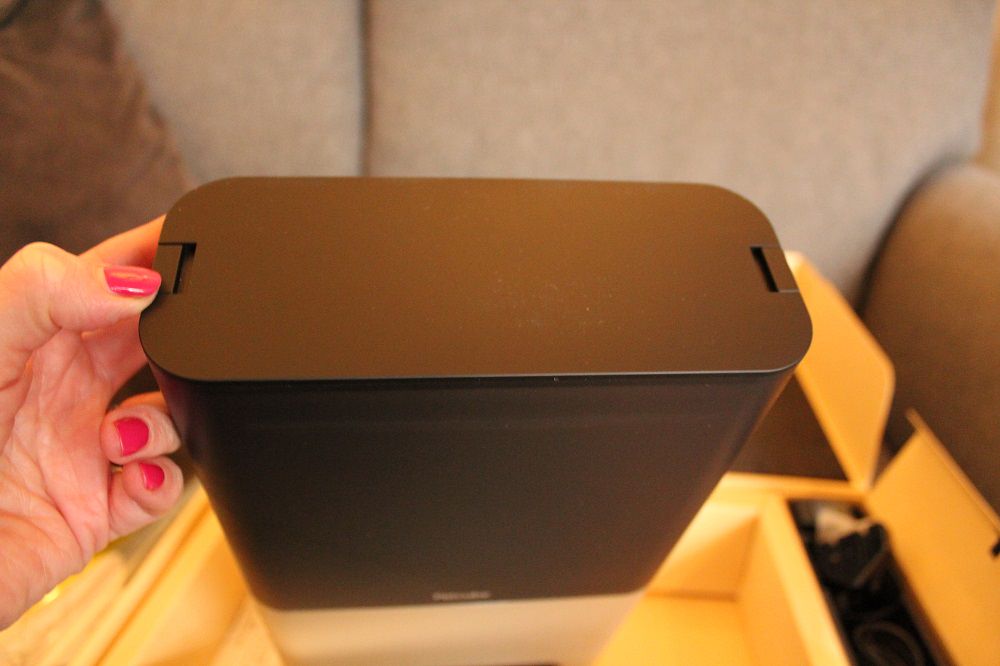 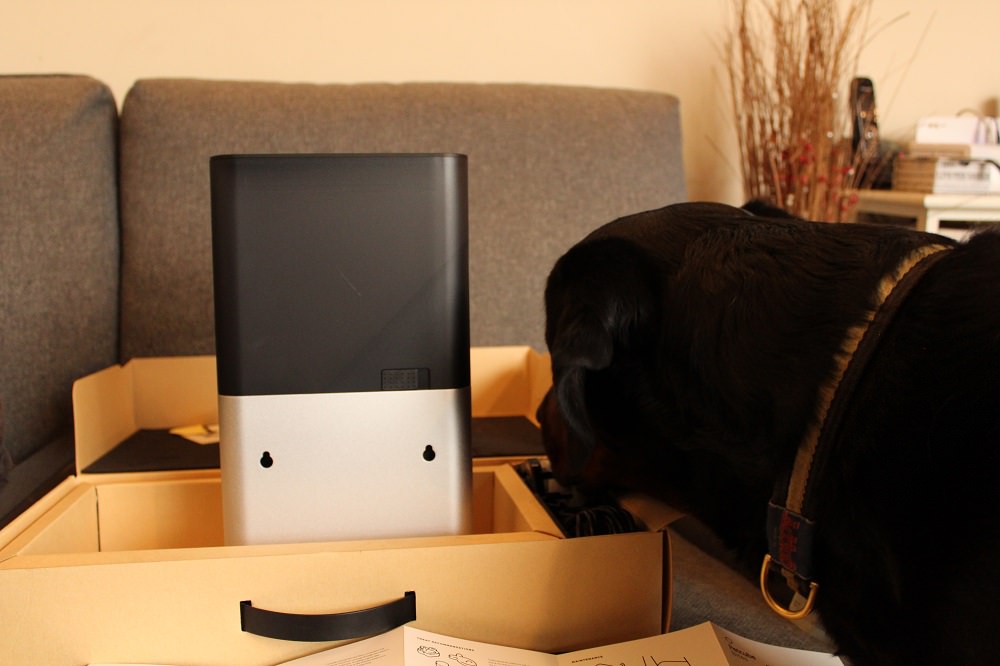 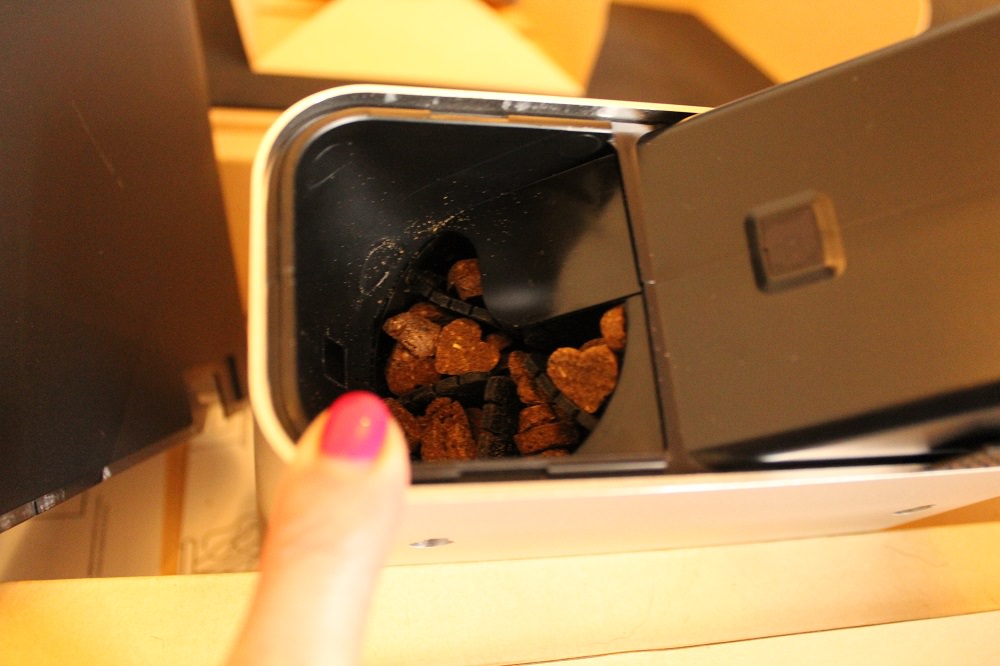 Once I had set up, chosen my 'Petcube Spot' and filled with treats, I downloaded the app.

The app is free and makes the whole process pretty straightforward. It's all fairly intuitive but helpful hints and tips on how to operate come up when you first use so you can get to grips with how it works. 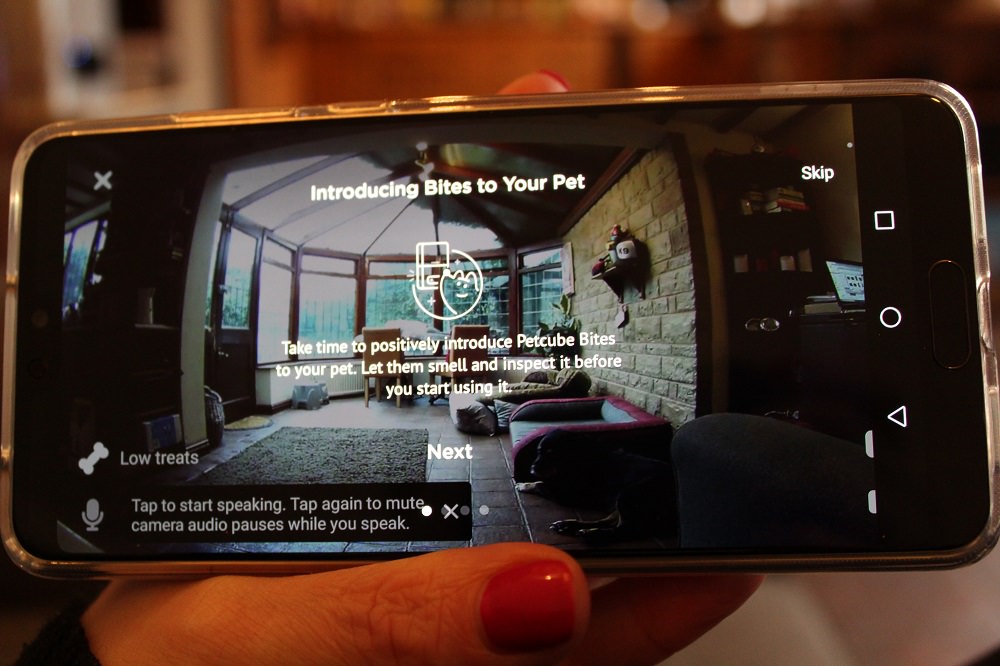 The audio function that you use to talk to your pets works well and you can set the distance you dispense treats to, to a maximum of 6 feet so if like me you have multiple dogs, you can set it as far as possible to make sure that each dog gets the best opportunity possible to get involved.

I really like the Petcube Bites. It has two-way audio so you can hear your pet and they can hear you.

The app has never once crashed, so it's stable to use, which is a big bonus. You can also set up your pet's profile so you can introduce your pets, share photos and stories via the app. 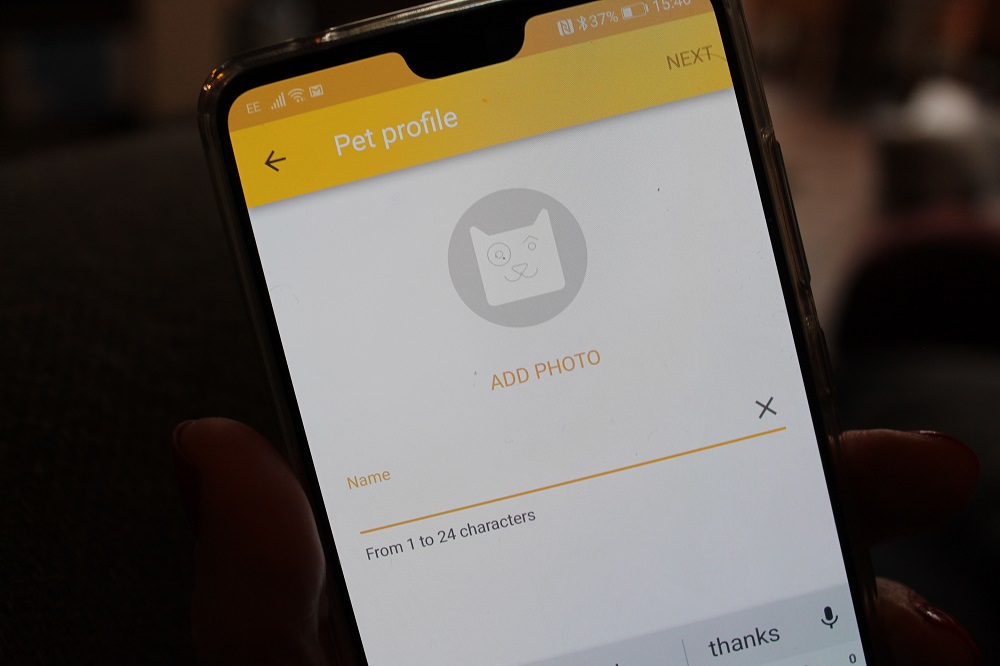 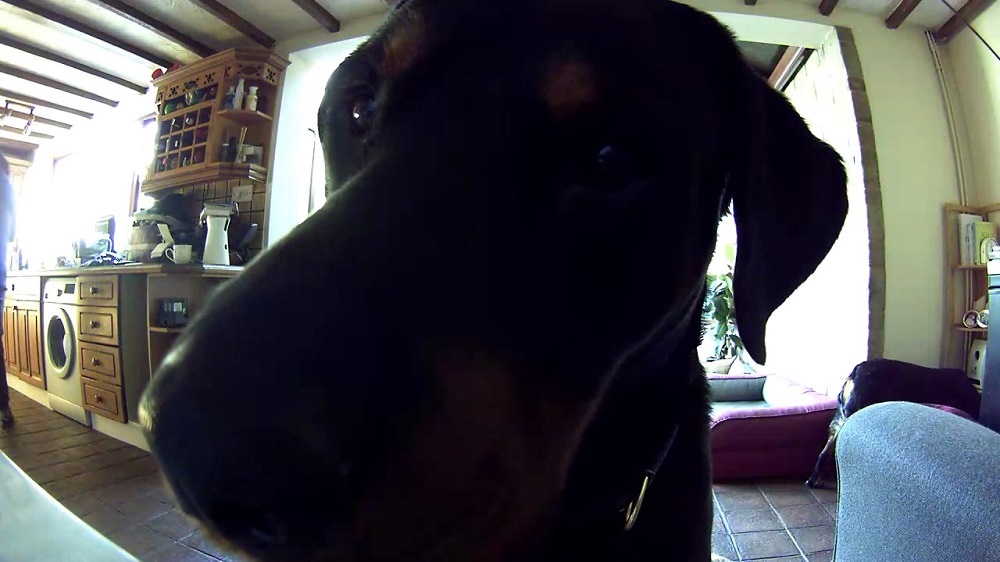 Meet Danny - and his Petcube face

It is stylish, so it will look at home wherever you place it.

The non-slip bottom works well and gives a good grip to the surface it's sitting on without needing to fix it to a wall. The non-slip bottom even holds firm when Danny's mimicking Mia's bucket mouth moves (ever since she got her Petzi treat cam she developed this move), while trying to force more treats out. 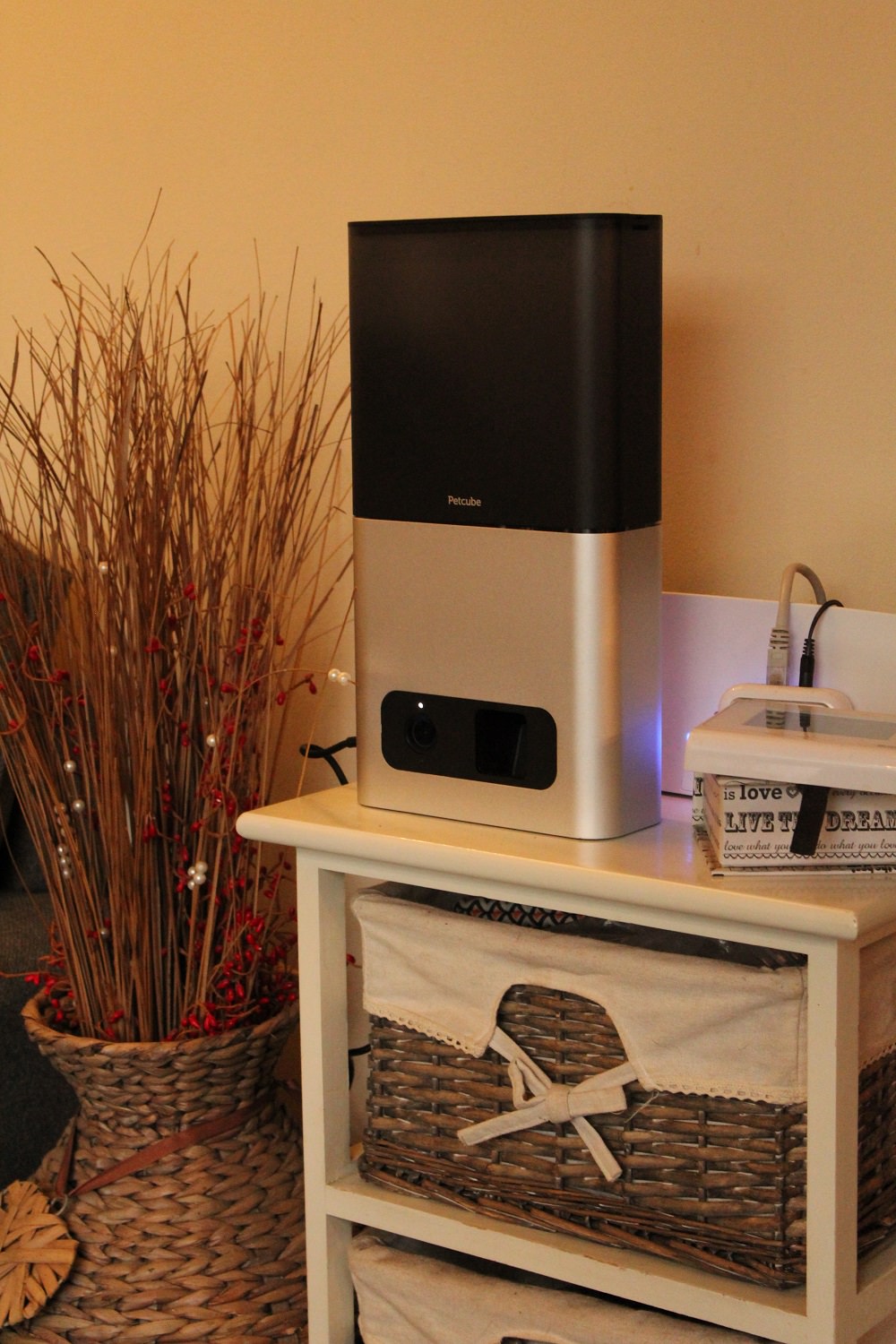 The camera streams in 1080p HD and has night vision, so the quality it delivers via photos and videos is good at all hours.

The option to save or share videos it automatically records when there's activity in front of the camera is a great feature too, so if you'd rather share or save videos to your own cloud (Google Drive or Dropbox, for example) instead of clogging up your phone's memory, it's simple enough to do - and I've captured some of my pets on camera doing things I was sure they were getting up to, but hadn't captured before (my cat scratching my new sofa, for example).

Of all the pet cameras I've tried, this has the best in my view for home security because it captures a 138° wide-angle view and alerts you if there's activity in front of the camera and it stores the footage.

You can choose to pay for a cloud storage system for a few days (around $6) up to $25 (for 30 days with additional club type benefits), or for no cost at all, you have four hours of video footage recorded and stored on the app.

There are two things I wish it had though and perhaps these come from experiences with other pet treat cameras, liking what you get used to and so on, but I wish it had a jingle that automatically sounded when treats were dispensed.

Instead, if you're using the app you can use the speaker at the same time, but if you automatically schedule treat time/s, then what your dog hears is a whirring noise that's gearing up to dispense the treats. 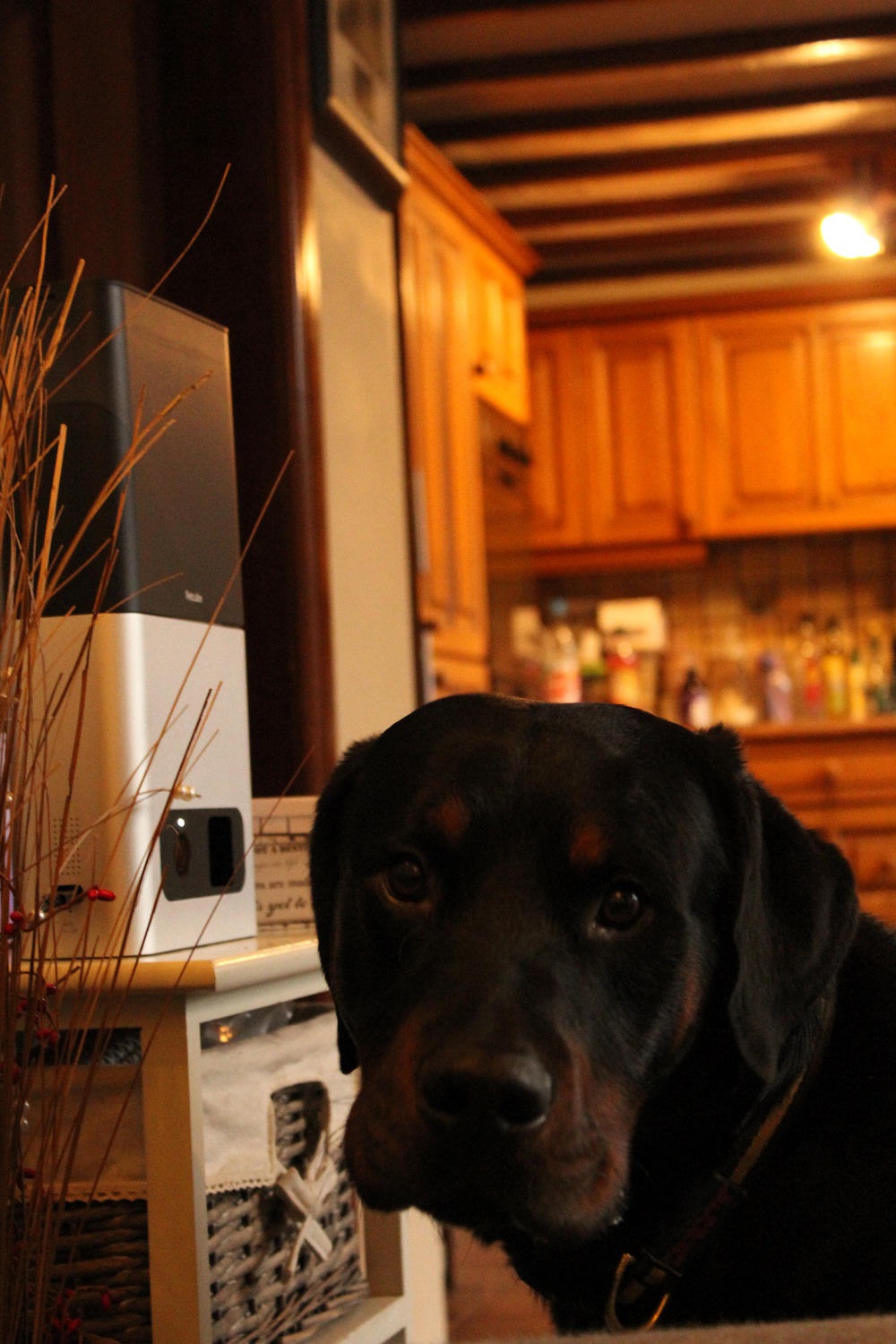 Don't get me wrong, they know what's about to happen all the same, but I think the option of a jingle would be good.

And while I love the fact that you can activate or deactivate notifications, I wish there were an alternative sound. If your phone is on silent, it vibrates, which is fine. If it's not, the sound is - well, less than flattering if you're in a room full of people.

But these are minor factors. For the price, you get a great piece of engaging technology with the Petcube Bites. 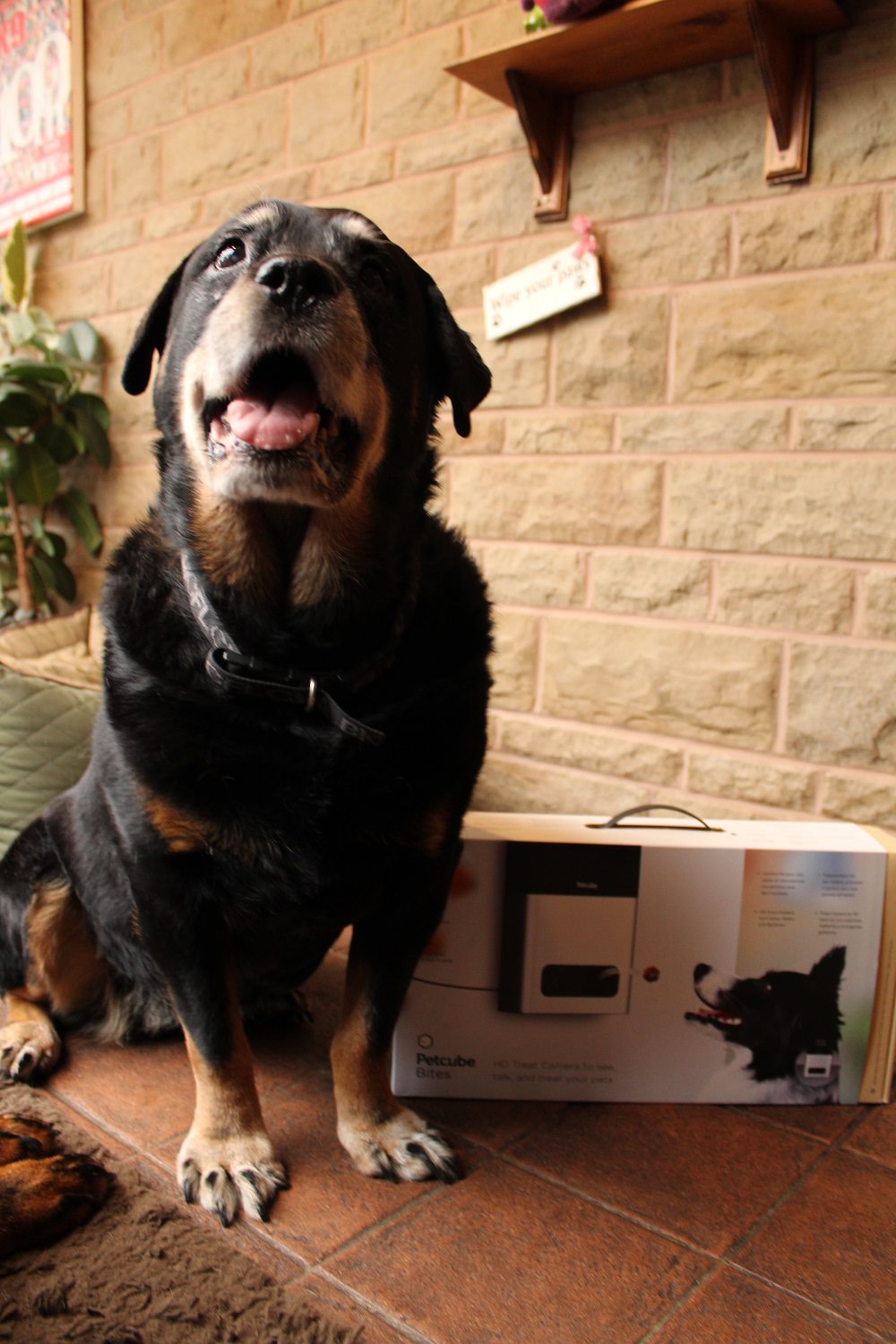 How Does It Stack Up Against Other Pet Cameras?

If I were comparing to other pet treat cameras I've reviewed:

Mia loves her Petzi and it holds a lot of treats, more than all others that I've tried, but it is pretty basic and by technology standards, it could be considered pretty old now - for example, it has one way audio only - your dog can hear you but you can't hear them.

The Petcube Bites beats it on that basis.

While the Furbo alerts you if your dog is barking, the Petcube Bites pet camera alerts you to activity, but isn't specific about what activity it is.

For Danny, who has separation anxiety it is helpful to know if he's barking if we're away from home.

The two pet cameras are fairly well balanced so it may come down to personal choice.

I'll admit, I've not yet found a way to maximise the Pawbo in my home. My cat isn't that interested in anything out of the norm and since it is more for small dogs and cats, it doesn't hold that many treats and many of its features, such as the laser games, aren't suitable for my dogs.

On that basis, the Petcube Bites beats the Pawbo. 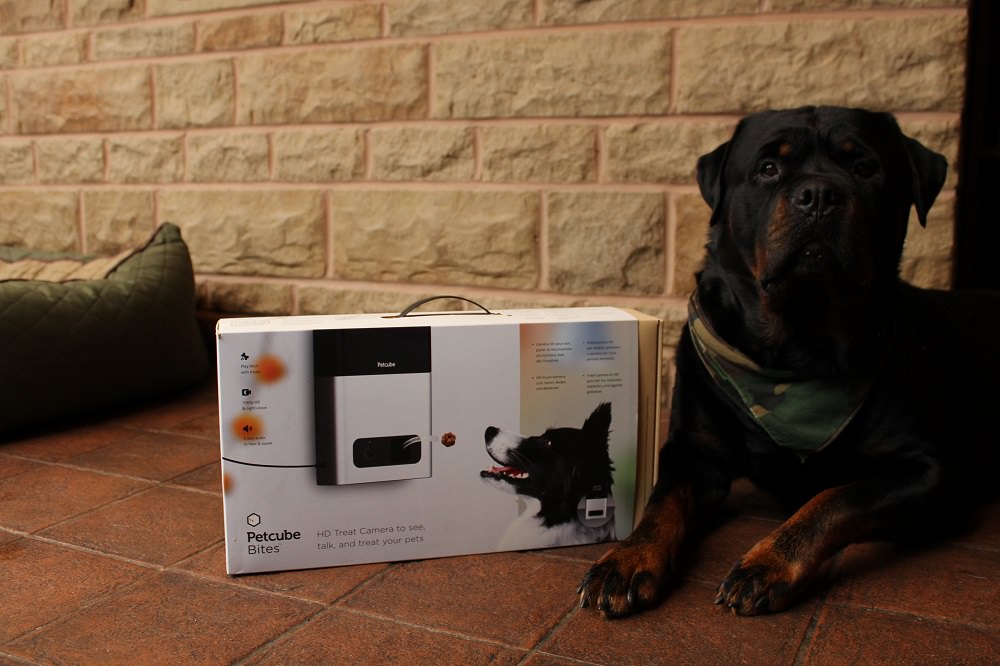 Coming up to Christmas and with Black Friday around the corner, it's worth keeping an eye on Petcube's own website and Amazon for special offers and discount deals.

Many thanks to Petcube for sharing their pet camera with us - we had a blast.